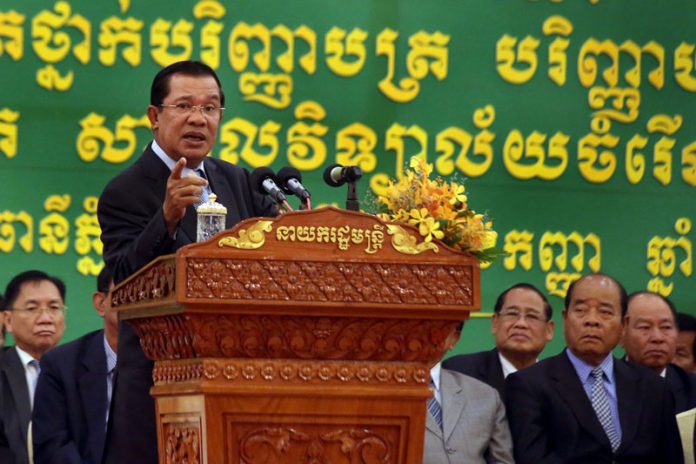 Prime Minister Hun Sen on Monday accused the CNRP of violating the “culture of dialogue” that he and the opposition agreed to last year, and warned seven lawmakers charged with incitement and insurrection that their parliamentary immunity would not save them from prison.

The seven CNRP lawmakers were charged over a protest at Phnom Penh’s Freedom Park in July during which some opposition supporters beat district security guards, a few of them severely.

The lawmakers were given immunity from prosecution later that year, after the CNRP struck a deal in July with the ruling CPP over 2013’s disputed national elections and ended its yearlong parliamentary boycott.

By a three-quarters vote, the assembly can also suspend the prosecution of a lawmaker. But during a graduation speech to university students Monday in Svay Rieng province, Mr. Hun Sen said the CPP, which maintains a slim majority in parliament, would not agree to do so if the opposition continued to attack him and his party.

“If you continue like this, the CPP and I will not eliminate [the charges]. Hun Sen, as a lawmaker and the leader of 68 lawmakers, will not give his support to eliminate them. So the seven lawmakers will still be jailed because you received immunity after you were charged,” he said.

“You beat others by leading the violence,” he said. “Those who are on bail are only out temporarily, so the trial must proceed. I want to give you this message before you come to negotiate and ask me to take it easy and then hit my head.”

Before making the threat, the prime minister rebuked CNRP Vice President Kem Sokha for critical remarks he recently directed at the CPP.

In a speech on Sunday, Mr. Sokha accused Mr. Hun Sen’s government of exploiting the country’s natural resources at the people’s expense.

“The words were very rude,” Mr. Hun Sen fired back Monday, “and I just want to be clear and reply, ‘Please be limited with…this street language.’ Haven’t you had enough disturbing the people when you held the demonstrations with your dissatisfied behavior after the elections?”

Since the July agreement, Mr. Hun Sen has been at least as harsh with the opposition as the opposition has been with him. In only the past few weeks, he accused CNRP lawmaker Yim Sovann of being a serial adulterer and has said that anyone who opposed the CPP effectively supported the murderous Pol Pot regime.

Even so, the prime minister said Monday that it was only the CNRP that had broken a pledge both parties made to keep their political discourse civil.

“I want to be clear…and send a message to His Excellency [CNRP President] Sam Rainsy that the culture of dialogue is not efficient,” he said.

“It’s OK now to start challenging each other without the culture of dialogue.”

Contacted after the prime minister’s speech, CNRP lawmaker Real Camerin, who is among the seven facing charges of insurrection, said the opposition was sticking to the deal.

“The CNRP respects the agreement 100 percent,” he said. “[Mr. Hun Sen] said the CNRP doesn’t do anything in line with the July 22 deal, which is not true. He himself doesn’t respect it.”