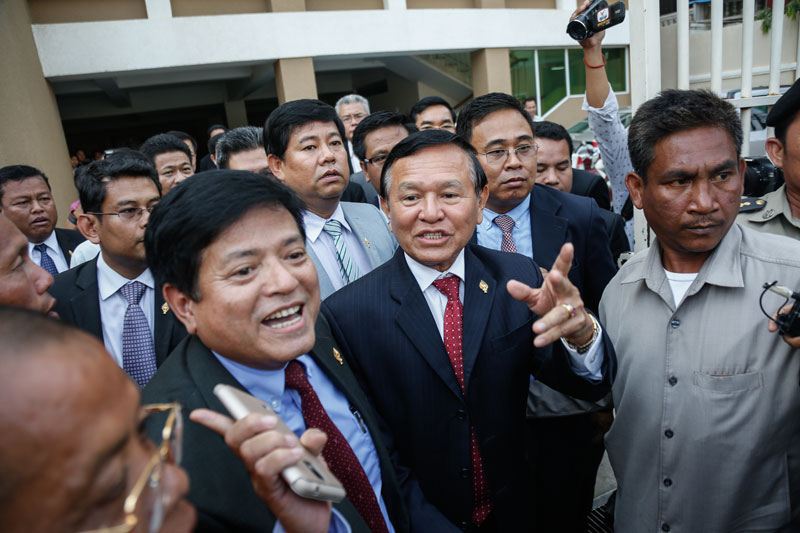 An opposition spokesman dismissed a series of audio clips released this week purported to be recordings of CNRP Vice President Kem Sokha speaking with his mistress, saying the files were aimed at causing “trouble” for the party.

The batch of audio clips—each about a minute in length—were posted on Monday to a Facebook page belonging to “Mon Srey,” the alleged mistress. The clips gained public attention on Tuesday after local news website Deum Ampil posted multiple articles about the them, linking back to Mon Srey’s Facebook profile.

The story was subsequently picked up by a number of other Khmer-language media outlets aligned with the government, and widely discussed on social media.

In each clip, a man with a voice similar to Mr. Sokha’s can be heard speaking flirtatiously with a woman—identified by Deum Ampil as Mon Srey. In one conversation, the woman can be heard questioning the man over his relationship with 20-year-old political activist Thy Sovantha.

“Were you involved in a love affair with Thy Sovantha?” the woman says. “Because some people have accused you of having a love affair and buying her a luxury car.”

“I never bought the car for her because she argued with my daughter and she had a conflict with the CNRP,” the man says, alluding to the activist’s public feud with Kem Monovithya, Mr. Sokha’s daughter and the opposition party’s deputy director of public affairs.

“She used the CNRP to do politics and make money overseas,” the man says of Ms. Sovantha. “I wish to swear 100 percent that I am not involved with Thy Sovantha and if I am involved, I will be destroyed.”

In other exchanges, the pair alludes to their sexual relationship.

“Do you want to do it fast or slow, huh?” the man asks in one clip.

“Of course,” the woman responds.

CNRP spokesman Yem Ponhearith said on Tuesday that he did not believe the man in the audio clips was Mr. Sokha.

“I have heard the voice recordings posted in the local media, but I don’t think it’s the voice of His Excellency Kem Sokha,” Mr. Ponhearith said.

“I think that someone created these voice recordings to make trouble for the CNRP,” he continued, adding that he was “not concerned” about the clips.

Mr. Sokha, Ms. Monovithya and Ms. Sovantha could not be reached on Tuesday.

Political analyst Ou Virak said he believed the fallout from the audio recordings—whether they were authentic or not—would be limited.

“If we look at the past, right before the 2013 elections, there was a similar kind of revelations,” Mr. Virak said of allegations that Mr. Sokha had paid for sex with a 15-year-old girl, and also abandoned a purported mistress, leaving her alone to support two children.

“The way I think of it, it’s about how [Mr. Sokha] handles it,” Mr. Virak added. “As long as he ignores it…I think it will probably die down in a week or two and it’s not going to be a big issue at all.”