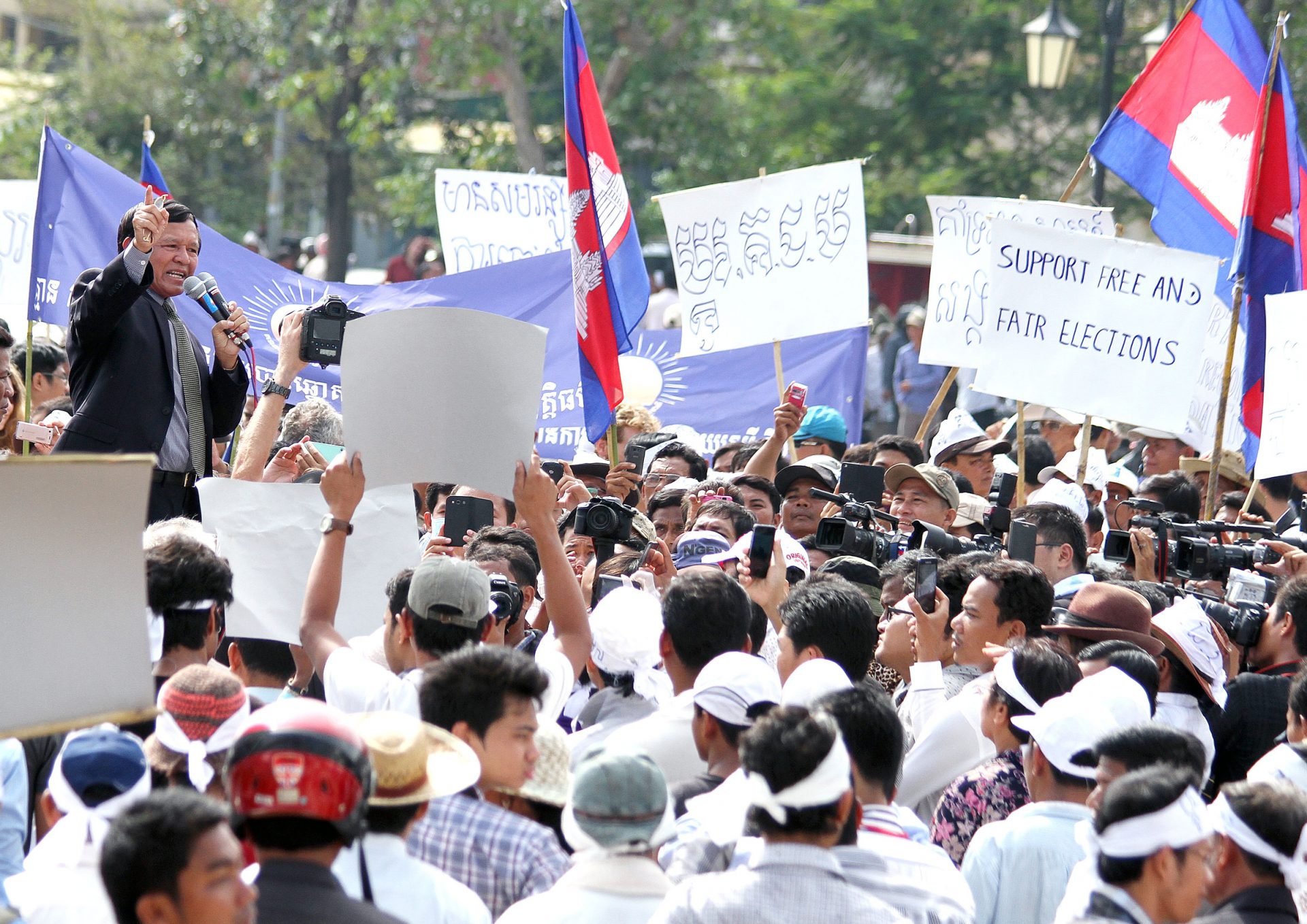 The opposition Cambodia National Rescue Party (CNRP) told thousands of supporters at a rally in Phnom Penh on Wednesday that it will hold an even bigger demonstration next week if the National Election Committee (NEC) does not reform ahead of July’s elections.

“We demand that the National Election Committee [NEC] restarts the voter registration process and delays the national elections,” Kem Sokha, vice pres­ident of the CNRP, said in a speech to his supporters.

“We will give the NEC one week to meet our demands. If they don’t have any solution to this problem, we will organize an even bigger protest here next week,” he said to the crowd of about 2,000 people.

The upcoming national elections have come under increasing scrutiny in the past two months as independent election monitors have warned that the ballot is likely to be the least fair since U.N.-sponsored elections in 1993.

An audit of the country’s voter lists released by the National Democratic Institute in March found that 1 in 10 people who are registered for the elections do not exist and 9 percent of past voters have been taken off voter rolls unfairly.

“If the government uses the inaccurate NEC voter list and makes no change before elections, it will violate the voter’s rights because many people have had their names removed from the list,” Mr. Sokha said.

The U.N.’s human rights envoy to Cambodia, Surya Subedi, has also called for reforms to be made to the NEC due to its perceived lack of independence and the close links between its members and the ruling CPP.

“Urgent and long-term reforms are needed to give Cambodians confidence in the electoral proc­ess and in the working of the National Election Committee,” Mr. Subedi said in a report re­leased in August 2012. Mr. Subedi also made specific calls for “a special election tribunal or election court…to resolve election-related disputes” and for all major political parties to have fair and equal access to the mass media to convey their messages to the electorate.

Tep Nytha, secretary-general of the NEC, said that there is nothing in Cambodia’s laws that would allow the NEC to toss out current voter rolls and delay the elections in order to allow people to register for new voter lists.

“There are no legal rules to allow the NEC to delay the election process and have people register again,” he said. “The NEC only implements the rule of law and we do not make the rule of law.”

As Wednesday’s rally neared its conclusion around 10 a.m., two representatives of the NEC joined Mr. Sokha on a makeshift stage in the center of the crowd to receive the CNRP’s petition calling for reforms to the election process.

Along with appealing to the NEC to follow the recommendations of Mr. Subedi, the CNRP demanded a new voter list and called for self-exiled opposition leader Sam Rainsy to be allowed to return to the country and participate in July’s elections.

Mr. Rainsy, who is currently touring the U.S. to raise funds for the CNRP’s election campaign, is in self-imposed exile following his convictions on charges including disinformation and incitement, which he claims are politically motivated, but would see him jailed for up to 11 years should he return to Cambodia.

An emotive Mr. Sokha, dressed in a dark blue suit and with his dyed-black hair slicked to the side, shouted slogans to the crowd calling for change. His supporters responded by repeating his words in unison. Mr. Sokha, who will run for a National Assembly seat in Kompong Cham province, repeatedly pumped his fist in the air as he spoke for roughly 30 minutes.

Along with senior officials from the CNRP, a number of other prominent activists joined Wednesday’s event. The venerable Luon Sovath, the Buddhist monk who has been banned from Phnom Penh’s pagodas for supporting land rights activists in the city, joined the crowd along with land rights ac­tivists from the Boeng Kak community. Prince Sisowath Thomico, the nephew and former adviser to the late King Father Norodom Sihanouk, who recently joined the CNRP’s steering committee, was at the event and said he would begin campaigning for the party as the election approaches.

Mu Sochua, who will run as a CNRP candidate for the National Assembly in Battambang, served as the master of ceremonies of the event, inviting various CNRP candidates to speak on the stage as Mr. Sokha and three security guards stood alongside them. At one point, Ms. Sochua—dressed down in a white linen shirt and khakis—asked members of the crowd carrying Cambodian flags to gather around her as she led them in song.

“We are Khmer citizens living in our motherland. We will defend our land and not allow another nation to take it!” she sang as a traditional Khmer melody played over the loudspeakers.

Despite threats by the CNRP to march from Freedom Park to the NEC, those in attendance dispersed peacefully after the event finished.

Throughout the morning, hundreds of municipal and military police lined the streets around Freedom Park to ensure that the rally did not move elsewhere.

Speaking after the rally, Ms. Sochua said that whether or not the elections will be fair, the CNRP would still participate in order to keep its seats in the National Assembly.

“We are going to win at least 45 seats. But why settle for only 45 seats when we can win more? We can win the election if these reforms are made,” Ms. Sochua said.

Phay Siphan, spokesman for the Council of Ministers, said that it was because the CNRP has no chance of winning the popular vote that they were resorting to “technical complaints” about the election process.

“They can’t convince the hearts of the people, so they resort to technical or political solutions” such as complaining about the legitimacy of the NEC and voter lists, he said.

“They want to avoid the result from the people’s vote, that’s why they delay. As the CPP, we want to let the people choose,” he said.

How a temple, and a newer generation, is carrying Cambodian tradition in Fresno

How Has the Russia-Ukraine War Impacted Cambodia’s Foreign Policy?