Police tallied only 23 rapes in Phnom Penh last year despite an overall spike of 20 percent in criminal cases, prompting experts to caution that the data posted on the Cambodian National Police website provided only a partial picture of the city’s crimes.

“Many of the numbers of crime are underreported because the police usually worry about their ranking compared to their peers,” said Thida Khus, head of women’s rights group Silaka. 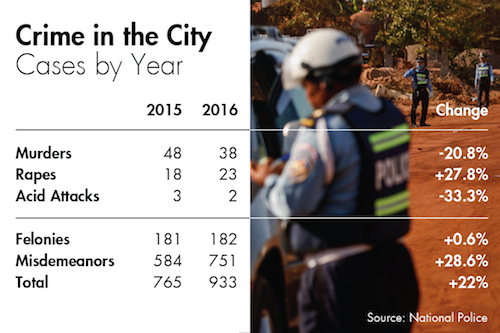 Municipal authorities recorded 933 criminal cases last year, up from 765 the year before, the data posted to the website on Tuesday says.

The bulk of the increase came from misdemeanors, which ticked up 28 percent to 751 cases with 910 arrests. Felonies rose by one case last year, to 182, including 38 murder cases. Authorities made arrests in 87 percent of the total cases, bringing in 1,154 suspects.

Criminal activity killed 53 people and injured another 235, with 70 motorbikes and seven automobiles lost in robberies, the report says.

Phnom Penh municipal spokesman Met Measpheakdey said the release of the rising figures was not intended as a rebuke to local authorities.

“It was meant to encourage, to motivate, to congratulate them for working hard to crack down on robbery and theft,” he said on Wednesday.

Police hope that a crackdown this year on drug crimes could put a dent in the numbers.

“In 2017, the number of crimes might decrease after the government launched strict measures to crack down on drug-related crimes,” which constituted 90 percent of last year’s cases, the post on the police website says.

The data did not provide breakdowns by districts or communes, and National Police officials could not be reached for comment.

But Ms. Khus said the low number of rapes was an indication of public distrust for police rather than a vote of confidence.

“The police and justice system has not really been friendly to women,” she said. “They don’t have a lot of trust that they will be looked upon sympathetically.”

To report rape “is very, very brave,” she added.

“As long as video from the camera where Kem Ley was killed is not publicly shown, the report does not make sense at all,” he wrote in an email.

Correction: A previous version of a graphic on this article misstated that there was one acid attack in 2015.