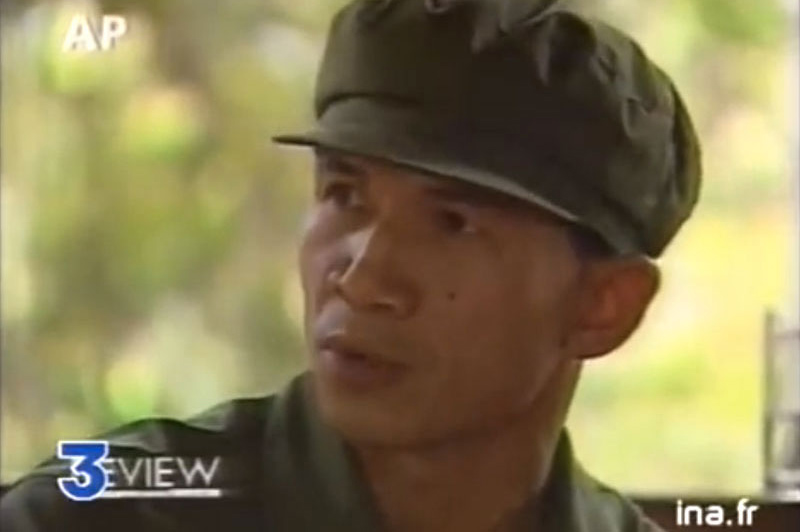 BATTAMBANG CITY – The University of Management and Economics here is a long way from the spartan jungle camps of Anlong Veng where Tep Khunnal spent the 1990s as Pol Pot’s chief aide and confidant, remaining loyal to the aging despot even as the crumbling Khmer Rouge movement eventually abandoned him.

Yet for Mr. Khunnal, a French-educated intellectual who grew so close to Pol Pot that he married the leader’s widow six months after his April 1998 death, his transformation from communist guerrilla into management lecturer has been the result of much sober reflection.

“The main task for Cambodia now is to develop management,” the stolid former revolutionary said.

Mr. Khunnal became a communist during his engineering studies in France between 1972 and 1977, when he ignored growing rumors about the savage brutality of Pol Pot’s regime and returned home to be immediately interned at the Boeng Trabek prison camp in Phnom Penh.

His time at the labor camp for intellectuals, he said, “was OK, it taught me something about life,” and when the Vietnamese Army invaded and ousted the Khmer Rouge in January 1979, he chose to flee with his captors to the Thai border.

“Cambodia [was] occupied by foreign forces,” he recalled on Saturday. “So what should I do as a Cambodian?”

It was the unlikely start of his drift from young revolutionary to a disciple of modern management theory.

With the Vietnamese-installed Phnom Penh regime rebuilding the country after the three years of the Khmer Rouge’s devastating experiment in total revolution, Mr. Khunnal ingratiated himself with his former jailers.

In 1980, having both turned down a job teaching math in France and earned Pol Pot’s trust, he was selected as the exiled regime’s deputy ambassador to the U.N. General Assembly in New York, where he remained until 1993.

In a repeat of his discovery of revolutionary communism a decade earlier in France, it was in New York that Mr. Khunnal was exposed to a new ideological perspective.

“There I heard about Peter Drucker. You may have heard about him,” Mr. Khunnal said. “He is considered as the father of management. I began to read his books and I began to listen to him. And then I thought that his management could be one of the ways to help Cambodia.”

“I cannot tell you exactly when I shifted my position from Marxism to that because it was mixed for me,” Mr. Khunnal explained. “But my main objective was to find a suitable way to help Cambodia to develop, that’s all.”

Yet his discovery of Peter Drucker, a professor who developed the core of modern management theory at New York University between 1950 and 1972, did not tame Mr. Khunnal’s unique devotion to the Khmer Rouge.

From his privileged position as a diplomat in Manhattan, Mr. Khunnal looked past the destruction wrought by the former despot and in 1993 returned to Khmer Rouge border strongholds as Pol Pot’s new personal secretary.

It was not until Pol Pot died in April 1998 that Mr. Khunnal left the flailing Khmer Rouge, which collapsed under military assault later that year, and took the leader’s young wife and daughter with him to start a new life.

The daughter, Sar Patchata, went on to study English literature at a Malaysian university and was married in an elaborate French-influenced ceremony at Mr. Khunnal’s home in the former rebel stronghold of Malai earlier this year.

“It’s very nice because I have been through different worlds and different perspectives,” Mr. Khunnal said when asked how he reconciled his discovery of management in New York with his seamless transition back into rebel life.

“I consider my life rich in that sense. You know, living in Manhattan, next to Second Avenue, next to the U.N., it was like paradise. And then sometimes I had nothing to eat, no medicine and no clothes for weeks,” he said.

In their final stronghold of Anlong Veng on the border with Thailand, Mr. Khunnal recalled, by the 1990s even Pol Pot was beginning to recognize the failings of communism and to come around to ideas promoted by the U.S.

“We talked almost every day and I also wrote what he said in different books,” he said. “From what he said, and told me clearly: In order to preserve the survival of Cambodia, we should turn to the West, not to the East.”

“It’s because we weren’t dogmatists,” he said.

And freed from the shackles of the Khmer Rouge’s anachronistic asceticism (Mr. Khunnal appeared in Mao-style green fatigues in interviews with foreign media as late as July 1997), his transformation was complete.

Mr. Khunnal now serves as the head of the ruling CPP in Banteay Meanchey province’s Malai district, the former rebel stronghold where he moved in early 1998. And since February 2012, he has served as one of Prime Minister Hun Sen’s advisers, drawing a salary of $400 a month.

The former cadre now even manages an investment firm whose mission statement reads: “Our goal is to reduce poverty in Cambodia by promoting capitalism,” and insists Pol Pot has had no influence on his management classes.

“Not at all,” Mr. Khunnal said resolutely. “The person that influenced me most in teaching is Peter Drucker. I consider him to be the greatest person for me and I try my level best to teach his management in Cambodia.”

The born-again capitalist has in many ways transposed his devotion to Pol Pot onto the late “father of management,” who died in 2005 but whose creed Mr. Khunnal offers as a solution to Cambodia’s retrograde development.

“In China, everybody considers it a developed country. But with China there were three factors: One was the opening of the country by Deng Xiaoping,” he said.

“Second is the Confucius culture, but [third] it’s also because of the help of Peter Drucker. Peter Drucker went there to help the country. You need management to grow.”

The students at the University of Management and Economics on Saturday said that they were aware of Mr. Khunnal’s past with the Khmer Rouge and Pol Pot, but nevertheless respected his unique perspective.

“Other lecturers just take lessons from the books but he takes lessons from famous people like Peter Drucker,” said Ouet Sam Oeun, 27, outside his class on Saturday.

For the former communist, taking up the mantle of managerial capitalism in the university classroom is only an extension of a life that he says was dedicated to the development of Cambodia.