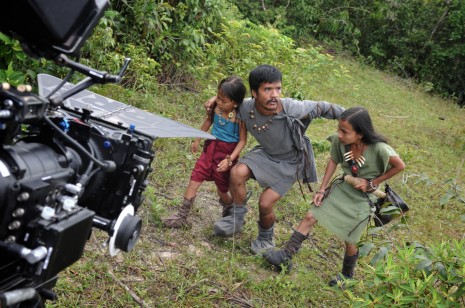 On the Set of ‘Age of the Hobbits’ in Kampot

On the edge of Bokor National Park, a half-hour’s drive from the sleepy riverside town of Kampot, three halflings pad silently through the sunlit forest clearing.

A sudden, thunderous booming sends them scurrying into the bush. They crouch behind a clump of vegetation and peer into the glade with fearful eyes. As the booming grows louder, a band of half-naked men clatters past the hiding spot, their spear points winking.

The booming becomes deafening, and a furry, tank-sized rhinoceros bursts from the foliage. A battle ensues. The warriors turn on the beast with their weapons, but the creature sends them sprawling.

Mr. Lawson turned to Richard Vialet, the director of photography. “Confidence?” he asked.

Despite a hurried two weeks of pre-production in Kampot early this month, the first few days shooting “Age of the Hobbits” has gone surprisingly well.

On set, mohawk-topped “Java men” sat smoking in a circle, well-toned “humans” inspected their spears, and “Hobbits” studiously practiced their lines for the next scene.

In between, camera assistants, sound technicians, prop-makers, make-up artists and translators, hustled around the set. Mr. Lawson, clad in a safari shirt, legionnaire hat and neon-green krama, grinned behind his white beard.

Over the course of the past month, a team of filmmakers from The Institute LLC, the international arm of Hollywood-based studio The Asylum, has been hastily putting together a film intended to “draft off,” or capitilize on the marketing of, Peter Jackson’s upcoming “The Hobbit: An Unexpected Journey.”

The Asylum—which has produced “mockbusters” such as “Transmorphers,” “Snakes on a Train” and “The Day the Earth Stopped”—specializes in low-budget, straight-to-video fantasy and sci-fi films, and is famous for its fecundity (it averages three movies per month).

“It’s not like Los Angeles,” said Mr. Lawson, 50, an L.A. native. But “sometimes you just have to take a chance and go into the hinterlands.”

And that’s why Mr. Lawson said he signed on to direct The Asylum’s newest film in Cambodia.

“They’re looking for more exotic locations to be able to shoot than they’ve shot before,” he said, “Cambodia fit that bill.”

The “Age of the Hobbits,” however, has little to do with its big-budget namesake.

Set 12,000 years ago in Indonesia, the film chronicles the collision of two races, humans and Hobbits, and their quest to defeat a bloodthirsty band of Java men.

For Jimmy Henderson, 28, a filmmaker from Milan, Italy, who has been a director and cameraman on Cambodian film and television sets for about a year, shooting “Age of the Hobbits” has been far from the romantic connotations usually associated with filmmaking.

“It’s like spending 15 days…at McDonalds: working a fast food machine where everything is produced merely for the consumer.”

“It’s a money-making thing,” said American producer Anthony Fankhauser. “These thing’s happen so quick, they’re so dirty, as long as you’ve got a good local fixer and you know you can get rudimentary film equipment, you travel half a dozen guys, you can make a movie.”

However, Mr. Fankhauser, 32, a former college football player, added that “Age of the Hobbits” has a slightly larger budget than most Asylum films—about $500,000, half of which is to be spent on-location.

“We don’t have a lot of money in [Western] movie terms, [but] we have more money than say a local production would have,” he said.

Asked why he opted to make the movie in Cambodia, Mr. Fankhauser explained that he had briefly lived in Phnom Penh four years ago and still had filmmaking contacts there.

“I had a lot of local resources here in Cambodia,” he said. “And I decided to give it a go. And that was it. There wasn’t too much pre-planning or forethought even put into it, man.”

He added that he would have liked to shoot among the temples of Siem Reap, but couldn’t afford it. “One day at Angkor Wat would have been our entire locations budget,” he said.

Mr. Fankhauser pointed out that making a movie in Cambodia has proved both fruitful and frustrating. “The fact that the people here are very welcoming and accommodating makes it work,” he said. “The lack of infrastructure and availability of small items is annoying.”

Production designer Kai Miller agrees. “Everybody working on this movie realizes that we are working under certain limitations,” said Mr. Miller, 26, an American expatriate who oversees a team of five carpenters that make everything from spears and clubs to villages and temples.

“Here, I’m kind of handcuffed; I have to rely a lot more on other people,” said Mr. Miller. “Unless you have an intimate knowledge of the culture,

[materials] can be difficult to source.”

Mr. Fankhauser added, however, that a solution to problems encountered during filmmaking were almost always possible in Cambodia. No canned air for cleaning lenses? No problem. A scuba tank did the job.

In order to get the two colossal crew buses to the remote set, production staff shored up a road over a railroad track and cut down a sign—for $50. In the U.S., he said, “You just wouldn’t be able to do it.”

Labor in Cambodia is also inexpensive, observed Mr. Fankhauser. He said that the approximately 110 Cambodian actors and 40 crew members get paid between $10 and $100 per day.

And while only 10 to 20 percent of the actors have any experience, the little people and dwarves on the set are delivering convincing displays in their roles as Hobbits.

“Our shorter folk, some of them are just knocking it right out of the park,” he said of the 20-plus Cambodians hired to play the eponymous protagonists. “Most of them, oddly enough, are trained actors, because they’ve found a niche within Cambodian life as performers.”

Still, as the film is in English, learning the script has been an arduous affair for those with speaking roles.

“It’s quite hard for me because I don’t speak any English,” said Chein Choeun, 28, who plays the role of the Tak-Tek, a mustached Hobbit.

His acting partner Sum Khorn, 24, who portrays Tak-Tek’s son Goben, said it can take them up to 30 minutes to memorize a single page of script.

Fortunately, Mr. Henderson said, “the script itself doesn’t require award-winning performances…because it’s set like 12,000 years ago. The people, they have to act a bit primordial in a way, so I think the language barrier can be broken down.”

And broken down it is. Even as the camera rolls, Mr. Lawson, working with the three actors who play Tak-Tak, Goben and Omi, Tak-Tek’s daughter, squats down just out of sight of the lens, speaking each line slowly and carefully, then waiting to hear it repeated back.

If the delivery isn’t right, he says it again, stressing a different word, changing his tone or, sometimes, simplifying the line itself.

“They are somewhere in those mountains. We must find them—and save them! Can you help us?” Mr. Lawson beseeched. Mr. Choeun repeated the line, effectively echoing the sounds of the words without understanding their meaning. A few efforts later, Mr. Lawson nodded with satisfaction. Good enough.

“It’s going to be a truly auteur piece at the end of the day,” Mr. Fankhauser said, admitting that many lines will have to be dubbed in post-production.

Of course, not all of the film’s actors require this kind of intimate coaching. This particular day, for example, was the first with lead actor Christopher Judge, legendary in certain sci-fi circles for his long-running role as Teal’c on the television show “Stargate SG-1.”

“His height was a great factor in being able to bring him aboard,” said Mr. Lawson. “And his willingness and availability to be on short notice.”

Mr. Judge, who plays Amthar, the gruff but compassionate leader of the humans, was getting the star treatment. A female crewmember held an umbrella over his head and had his favorite cigarettes—Marlboro 100s—on hand. Mr. Lawson also granted him permission to duck into an air-conditioned van between takes.

Mr. Fankhauser said that Mr. Judge, along with female lead Bai Ling, best-known for her role in horror film “The Crow,” are being paid “astronomically different” salaries than their less experienced colleagues.

Asked why a veteran actor like himself would stoop to taking a role in a low-budget flick like this one, Mr. Judge, 48, replied, “I have a 7-year-old daughter; she would really enjoy it.”

Anyway, he said of Asylum productions, “It’s a model that more and more people will go to…with the world economy the way it is.”

“I’ve played a lot of warriors and I’m attracted to characters with empathy. Amthar has that,” he added, drawing on his cigarette.

Mr. Judge described Cambodia as “hot,” adding, with a smile in the direction of his umbrella-wielding attendant: “But the people are beautiful and it’s such a hidden gem.”

The film’s script also calls for many extras.

“We did find, once we got here [Kampot] that we needed more Hobbit-sized people, Mr. Lawson said. “[So] we ended up hiring some of the children from the local village who had been spending time just watching our shoot.”

“Age of the Hobbits” will also rely heavily on computer-generated elements added in post-production, such as the wooly rhino and winged kimono dragons on which the Java men ride, said Mr. Lawson, a visual effects supervisor at The Asylum for the past two years.

By mid-afternoon, even Mr. Lawson’s ebullience is waning. The stress of the shoot has taken its toll. Sunburned crewmembers have grown irritable and the actors restless.

“We are trying our best to get everybody to do things a certain way,” said Mr. Lawson. “It’s not always easy to impart what that way is because there are just…not a lot of experienced film people in the American way of filmmaking.”

“It just doesn’t operate like any other set that I’ve had,” added Mr. Fankhauser.