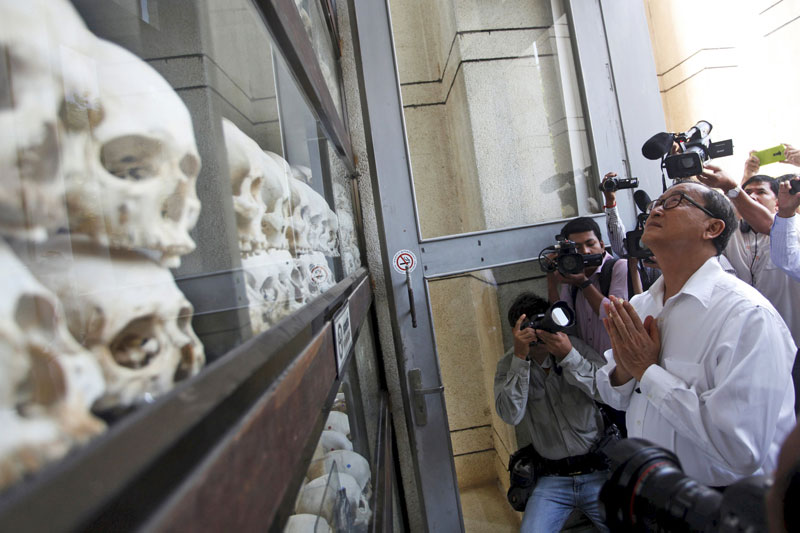 At a ceremony marking 40 years since the Khmer Rouge seized Phnom Penh and began their bloody rule of Cambodia, opposition leader Sam Rainsy said on Friday that he and Prime Minister Hun Sen had, for the time being, ended the country’s long history of conflict.

Speaking to some 300 CNRP supporters at the Choeung Ek Gen­ocidal Center, commonly called the killing fields, Mr. Rainsy said that after centuries of violence it was time for Cambodians to achieve peace on their own terms.

“For 500 years in the past, we have seen Khmers suffering and killed by other Khmers or by foreigners,” Mr. Rainsy said.

“When Khmers fought for power, one group had conflict with another group and they killed each other with no end. When foreigners intervened, they allowed one group to win and they appointed them to hold power,” he said.

“There is only one lesson: To avoid having a tragedy like this in the near future, we have to change our mindset, our habit, our culture of trying to get rid of each other through violence and a culture of war.”

Speaking to reporters after his speech, Mr. Rainsy said that he and Mr. Hun Sen, through their recently established “culture of dialogue,” would prevent violence from once again entering the country’s political arena.

“Now, Samdech Prime Minister Hun Sen and I, Sam Rainsy, we are respecting our promise to end tension and violence,” he said. “And we will avoid any violence in the future.”

Earlier this week, the opposition leader joined the prime minister at a Khmer New Year festival in Siem Reap City, a seeming show of solidarity following the establishment of a new National Election Committee and the release of 18 activists who had been imprisoned over the past year.

But while Mr. Rainsy and Mr. Hun Sen have touted a new era of cooperation, their parties remain divided over the importance of April 17, the day that Khmer Rouge forces claimed victory over the republican government led by Lon Nol and backed by the U.S.

CPP spokesman Chhim Phal Virun said yesterday that the party preferred to focus on January 7, the day that Vietnamese-led forces toppled the Khmer Rouge in 1979.

“We don’t celebrate the day the Khmer Rouge were handed power.”

But for a number of years in the 1980s—under the Vietnamese-installed government whose leaders continue to rule the country today —April 17 remained a day of celebration, according to Youk Chhang, director of the Documentation Center of Cambodia.

Mr. Chhang said that as the country moved away from communism and toward a free market economy in the 1980s, breaking from Hanoi’s vision for Cambodia, the government also began to reconsider its view of April 17.

“The CPP celebrated this through the 1980s, before the Vietnamese withdrawal,” he said. “April 17 was called the day of victory over the U.S. imperialists, which has a lot to do with Vietnam and not so much Cambodia directly.”

According to historian Henri Locard, the country’s leaders continued to view April 17 as a day of liberation, and an important step in the communist revolution.

“Earlier, before the 1990s, they said it was liberation, so they more or less celebrated that as a great stride toward revolution,” he said.

“But I think the idea of revolution now has completely died out, so they prefer to be quiet.”

Previous articleFugitive General Arrested, Placed in Prey Sar
Next article40 Years After KR Victory, Has Cambodia Dealt With Its Past?