A CPP official and a regional pollster on Sunday confirmed their involvement in a wide-ranging political poll last year that has apparently informed ruling party politics ahead of elections, as documents showing the results of two such surveys were leaked over the weekend.

Some of the documents, sent to reporters by email, show Cambodian voters preferring the CNRP over the ruling party to fight corruption, create jobs, and win next year’s national election, according to a face-to-face survey of 5,379 respondents across all 24 provinces conducted in September and October.

The documents suggest the ruling party also tested its strong-arm tactics with the electorate. Potential voters were asked whether they would be more or less likely to vote for the opposition if its former president, Sam Rainsy, “was kept out of the country,” or “if the CPP limits the CNRP from campaigning,” with respondents saying the scenarios only increased their support for the opposition.

Mr. Rainsy immediately embraced the survey “secretly ordered by the CPP,” posting a link to the findings to his Facebook page on Sunday.

“The truth is our most effective defensive and offensive weapon,” he wrote in an email on Sunday.

Reached on Sunday, Mr. Hout confirmed that he had participated in a broad CPP survey but said he was too busy to respond to further questions.

“I don’t talk to media unless it’s something I’m interested in, which I’m not,” Mr. Shaviv said.

The consultancy’s website lists the Cambodian prime minister as a client and says the firm conducted research for parliamentary elections here. 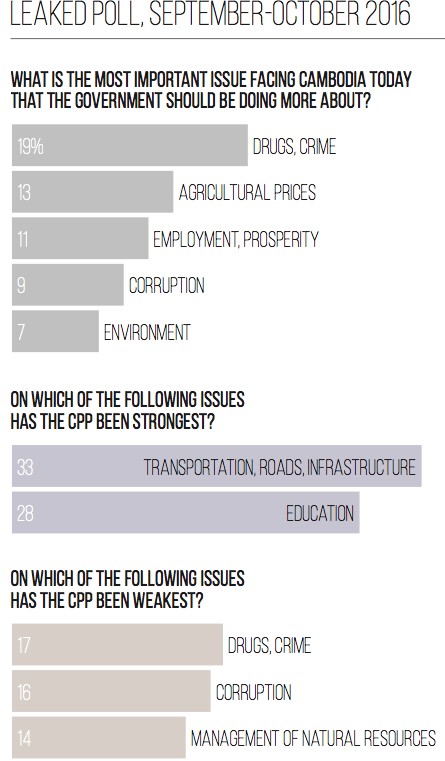 Xavier Depouilly, managing director of Indochina Research in Vietnam and Cambodia, confirmed that Indochina had been contracted by Mr. Shaviv’s company to conduct the second survey last year, which they had done in face-to-face interviews using questions provided by Mr. Shaviv’s firm.

“We have no idea who is the end client because we are contracted by Shaviv research,” he said. “We don’t know who is the client [or] for which reason” the survey was conducted, “so we have no idea about the results of the survey.”

If the hacked emails are to be believed, the prime minister himself was briefed on the research results, while a working group whose members are not listed coordinated with Mr. Shaviv to tweak questions and discuss findings.

A first survey of 2,000 respondents showed that “this is a competitive race,” Mr. Shaviv purportedly wrote in a memo dated May 11.

“This research has identified CPP’s strengths, but also some vulnerabilities that—if properly exploited by the opposition—could shift enough voters to endanger CPP’s victory,” the memo says.

Respondents in the first survey scored the CPP and Mr. Hun Sen roughly twice as strong as the opposition at managing the economy and handling foreign relations, and they associated Mr. Hun Sen and the CPP with being “a reformer,” “trustworthy,” and “good leader” by a similar margin over Mr. Rainsy and the CNRP.

Potential voters also feared the repercussions of a CNRP victory, with 58 percent of respondents predicting any transition to power would be “very violent” or “somewhat violent,” compared to 30 percent anticipating a very or somewhat peaceful move. Senior CPP officials including Mr. Hun Sen have repeatedly warned of war if the opposition wins next year’s vote. 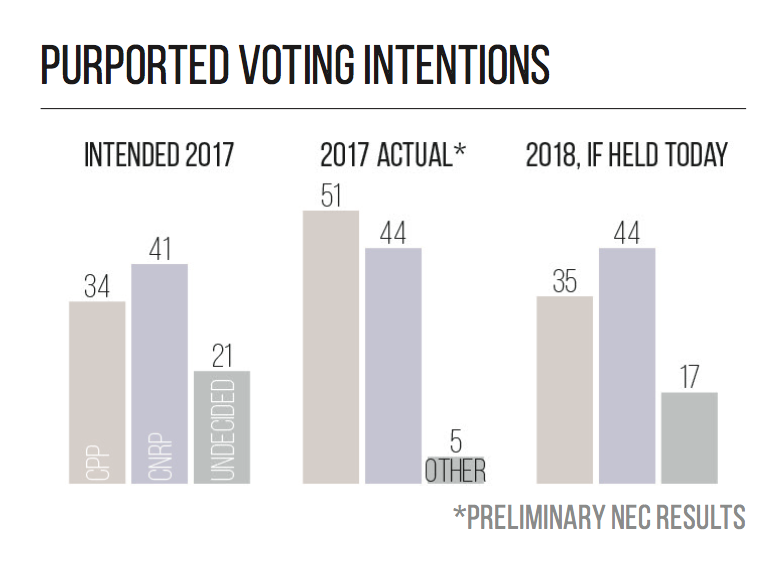 The May 2016 results also contain contradictions and dilemmas for the CPP.

Respondents aged 30 to 39 were less likely than any other to support the ruling party across a broad swath of issues, and a third of all respondents said the CPP was weak on drugs and crime, outstripping other concerns like agricultural prices and corruption.

“I believe we have the most to gain by focusing on law & order issues—both in policy and communications,” the memo says.

The government kicked off a high-profile, anti-drug campaign in January that has seen more than 8,000 users arrested for drug-related crimes.

A plurality of respondents believed Mr. Rainsy to be innocent of the charges against him, with nearly a third saying they were more likely to vote for the CNRP if he was “kept out of the country during the next elections.”

Mr. Rainsy left Cambodia in November 2015 to attend a meeting in South Korea and has remained abroad ever since amid a slew of lawsuits widely seen as politically motivated.

“The data offers us strong indications that the more aggressively CPP handles Rainsy and CNRP, the better CNRP and Sam Rainsy will perform electorally,” the memo says. “We can see in slides 44-49 that limiting CNRP from campaigning and keeping Sam Rainsy out of the country significantly bolsters CNRP/Rainsy’s support amongst its own voters and the key 30-39 year old demographic, and is even met with disapproval by CPP voters.”

If the September and October surveys are any indication, voters’ attitudes to the CPP soured significantly over the months following the May poll. Mr. Hun Sen’s favorability rating dipped from 81 percent in May to 63 percent in September, according to one slide, while Mr. Rainsy’s rose 10 percentage points to 84 percent in the same period.

The second survey included a larger sample size than the first, with 5,379 respondents saying they trusted the CNRP more to rein in corruption, create jobs, manage the economy, and handle relations with Vietnam, though they still gave the CPP higher marks for education and infrastructure development.

The biggest political event of the intervening months—the July assassination of political commentator Kem Ley—figured into the second wave of research, with two-thirds of respondents saying the killing had weakened their trust of rule of law in Cambodia.

The period also saw an escalation in a legal case against then-deputy opposition leader Kem Sokha, with nearly a third of respondents saying they were more likely to vote for the CNRP if Mr. Sokha were in charge compared to 17 percent saying they were less inclined, and 36 percent giving their opinion as unchanged.

Mr. Sokha was elected CNRP president in February in reaction to the newly amended Law on Political Parties, which empowers the courts to dissolve parties run by convicts. In a reversal from the first poll, a plurality of respondents said they would vote for the opposition over the CPP in both commune and national elections.

In reality, however, commune election results from the National Election Committee showed the ruling party beat the CNRP by roughly 7 percentage points.

CPP spokesman Sok Eysan said he had not seen the survey but dismissed its findings as “useless” and “baseless.” He took particular issue with results showing the government was weak on drugs, a problem he blamed on users rather than authorities.

But Mr. Eysan was not sure why he didn’t trust the research. “I don’t know why but I don’t believe those who did the survey,” he said.

That attitude is common among “more sophisticated authoritarian regimes” that conduct “notoriously unreliable” polling, according to Lee Morgenbesser, a scholar at Australia’s Griffith University.

“The problem they all confront…is what is known as the dictator’s dilemma: how can the CPP know people honestly support them, or [only] support them because they demand it?” he wrote in an email, citing the example of a 2015 poll by Burma’s then-ruling Union Solidarity and Development Party that showed the party would suffer heavy losses but was ignored by party leaders.

“The CPP is caught between two extremes: ignore it or trust it. Neither are good options.”

Still, Mr. Depouilly of Indochina Research said that the firm was “quite surprised” how forthcoming respondents were.

“Some people were very happy to be able to give their voice,” he said.