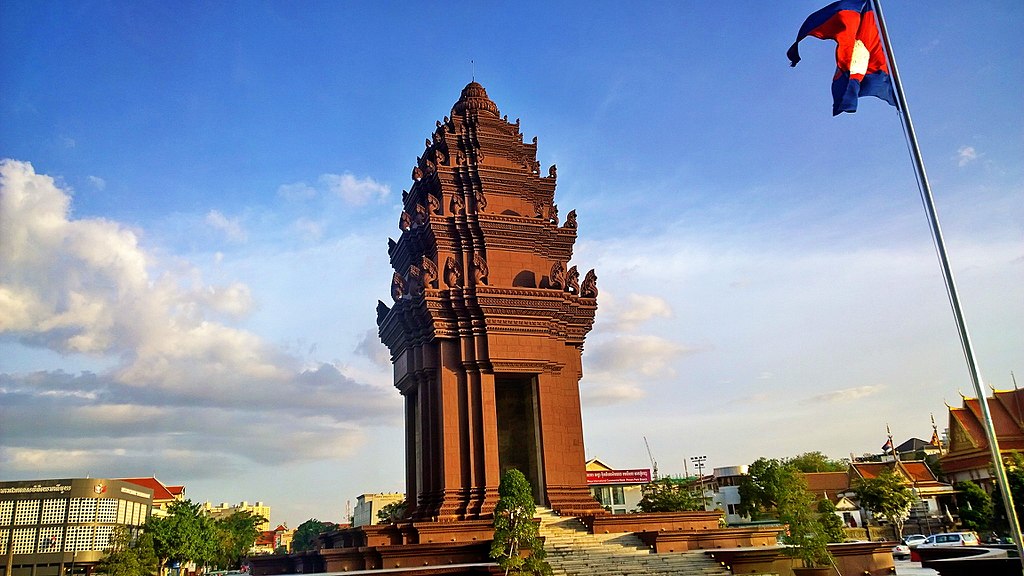 Speaking to reporters by telephone while fleeing his house at around 6 p.m., Mr. Soksan declined to say where he was going, saying only that he was heading somewhere safe.

“The police are raiding my house,” he said. “Now I escaped through the other door…. I cannot say anything about my whereabouts or my house location.”

Kem Monovithiya, the CNRP’s deputy head of public affairs, confirmed the incident but said it was unclear why the youth leader was being threatened with arrest.

1:18 p.m.: The opposition’s meeting to discuss the arrest of its leader is over, but the party would not divulge what—if anything—it has decided to do.

Ms. Sochua would not answer questions about the party’s plans, or who could replace Kem Sokha, who has been arrested over accusations of treason, if it came to that.

12:15 p.m.: CNRP spokesman Yim Sovann has left a meeting of party leaders in a rush without speaking to reporters.

The opposition party had been discussing at party headquarters what steps to take after the arrest of its leader, Kem Sokha, overnight.

Earlier, CNRP lawmaker Real Camerin spoke in support of Mr. Sokha before entering the meeting, saying, “My boss, Kem Sokha, never said anything about color revolution. Never told us about a plan to topple the government. Not at all.”

“Kem Sokha, our leader, never wants to make war. I myself have already experienced war. Who wants to experience war again? Why? He wants us to be peaceful and stay calm,” Mr. Camerin said.

11:09 a.m.: “Troops are mobilizing around the city of Tbong Khmum and they’re heading to CC3,” said Ly Heng, an executive committee member for the CNRP in Tbong Khmum province.

The party’s supporters in the province are now gathering to form a plan about what to do, Mr. Heng said.

10:11 a.m.: Asean Parliamentarians for Human Rights chairman Charles Santiago has called the arrest of Kem Sokha overnight “alarming,” and an attempt to “crush” and “cripple” the opposition in Cambodia.

“If members of the international community, including and especially donors, fail to speak up and take action now, they risk ending up complicit in Cambodia’s descent into outright dictatorship,” Mr. Santiago said in a statement.

“The arrest of opposition leader Kem Sokha early this morning takes the ongoing crackdown by the ruling party in Cambodia to an alarming new level. With national elections on the horizon, it is clear that this is nothing more than a thinly veiled attempt to crush the opposition before the campaign even starts. For months, we have been witnessing the escalation of government attempts to cripple the opposition, but it appears now that Prime Minister Hun Sen is so afraid of what might happen in a genuine vote, he won’t allow for competition at all,” Mr. Santiago added.

“Kem Sokha’s arrest is a blatant violation of parliamentary immunity protections under the Cambodian constitution and an affront to the rule of law. He should be immediately and unconditionally released.”

9:40 a.m.: CNRP politicians have started to arrive at party headquarters in Phnom Penh amid ongoing confusion about their leader’s situation, and have questioned whether he was actually moved out of the capital as the Interior Ministry has stated.

Lawmaker Ho Vann told reporters that “it is not confirmed whether or not he is at Correctional Center 3 in Tbong Khmum…. Only Khieu Sopheak said that,” referring to the ministry spokesman.

Mr. Sokha’s daughter Kem Monovithya also tweeted that according to her “reliable source,” her father could still be detained in Phnom Penh.

Mr. Vann added that eight bodyguards had been arrested alongside Mr. Sokha.

“The court has the right to decide whatever they can,” General Sopheak said.

Gen. Sopheak added that Mr. Sokha had not yet been charged—“only accused,” he said.

He said Mr. Sokha’s parliamentary immunity did not apply in this case because it was “an on-the-spot arrest,” and authorities had the right to hold him for 72 hours before taking further action.

7:40 a.m.: CNRP Vice President Mu Sochua said party leaders would meet “sometime this morning” to plan the next steps following party president Kem Sokha’s arrest. When asked if the party and its supporters planned to demonstrate against the arrest, Ms. Sochua would only say that the party had already put out a statement condemning it.

“At the moment the top level of CNRP will be meeting this morning, because it all happened very suddenly,” she said.

2:05 a.m. (updated 4:45 a.m.): Cambodia’s opposition leader Kem Sokha has been arrested for “treason” following a raid on his house overnight Sunday, according to a government statement and opposition officials, a move immediately slammed as a “disastrous setback” for human rights and democracy.

The CNRP party president was arrested at his house in the Toul Kok area of Phnom Penh at 12:35 a.m. on Sunday, the statement said.

The government said it had evidence linking Mr. Sokha to a secret plot to “harm” the country, according to the statement released on government mouthpiece Fresh News.

“The Royal Government of Cambodia informs that according to a video clip broadcast on CBN (Cambodian Broadcasting Network) in Australia and other evidence collected, it clearly shows secret plans of a conspiracy between Kem Sokha, others and foreigners to harm the Kingdom of Cambodia.”

“The above act of this secret conspiracy is treason,” added the statement.

The government appealed to people to remain calm and allow the court and police to proceed, it said.

Article 443 of the Criminal Code states that “conspiracy with [a] foreign power”—defined as “having [a] secret agreement with a foreign state or its agents, with a view to fomenting hostilities or aggression against the Kingdom of Cambodia”—is punishable by imprisonment from 15 to 30 years.

The move follows weeks of increasing political tensions, as American democracy NGO the National Democratic Institute was expelled from the country and more than a dozen radio stations carrying content from the opposition and U.S.-funded Radio Free Asia and Voice of America were shut down.

Ten months ahead of a crucial national election, the government has now appeared to have set its sights on the CNRP, the most formidable opponent the ruling party has faced in years. If Mr. Sokha is convicted of a crime, the opposition party could be dissolved under amendments to the Political Party Law that were passed earlier this year and have already forced former party president Sam Rainsy out of politics.

The CNRP issued a statement early Sunday morning condemning the arrest, saying it was “politically motivated” and violated the Constitution.

“The arrest was made in the middle of the night, while Mr. Kem Sokha still has assembly immunity,” the statement said.

“The CNRP appeals to the authorities to unconditionally release Mr. Kem Sokha and ask the international community to intervene for the release, and for the end to intimidation and oppression by police authorities against the CNRP and its officials,” it added.

CNRP Vice President Eng Chhay Eang earlier wrote on his Facebook page that the arrest of Mr. Sokha was a “serious situation for Cambodia,” while Mr. Sokha’s daughter, Kem Monovithya, the CNRP’s deputy director of public affairs, tweeted at 12:35 a.m. that her father’s house was being raided by police.

“Kem Sokha and all bodyguards are taken away by 100-200 police without warrant after they raided his home,” she tweeted.

She later tweeted that he had been handcuffed after “police raided and vandalized his home.”

“He confessed to have long term plans with the United States of America…,” said the tweet. “Thank[s] to him, we now know who was (is) the Third Hand…”

Mr. Sokha’s party colleagues were left in shock at the news of their leader’s arrest.

“I never expected this to happen. It is a shock. It will shock the world too,” said CNRP lawmaker Ou Chanrath.

“It could be a misunderstanding. We need to really communicate internally at the national level among our Khmer leaders for the peace and stability of our country.”

Rights groups quickly added their voices to concern at the sudden arrest of Mr. Sokha.

“The government’s charges lack credibility, given its long record of misusing its legal system to silence or intimidate critics and political opponents,” said Mr. Sifton in a statement. “For 33 years, Hun Sen has used violence, threats, corruption, and bogus legal charges to stay in power, and in the last year has been intensifying his attacks on civil society and the political opposition.”

Mr. Sifton called on Cambodia’s allies and donors to condemn “this latest attack on democracy, and summon Cambodian ambassadors abroad to explain their government’s actions.”

“The international community, which provides a major percentage of the Cambodian government’s annual budget, should put Hun Sen on notice that if he doesn’t reverse course, it will be impossible to consider next year’s elections free and fair,” he added.