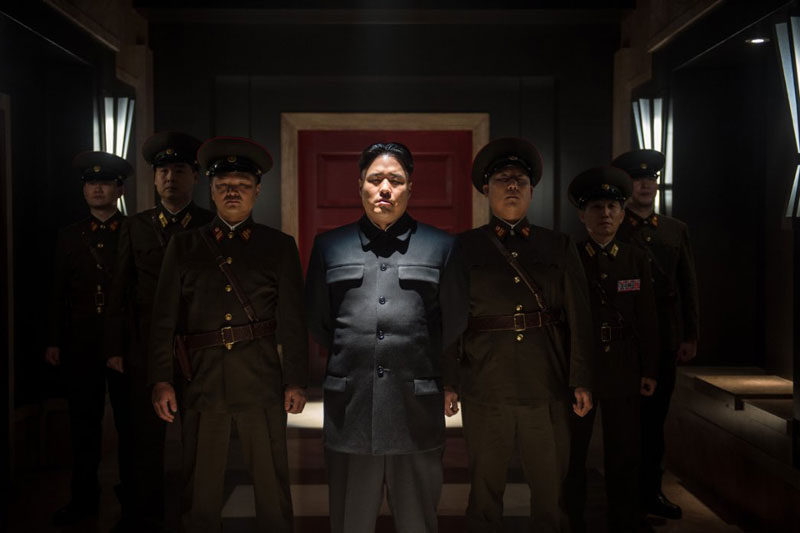 DVD shops at Phnom Penh’s City Mall say their bootleg copies of “The Interview,” a Hollywood farce about a fictitious CIA plot to assassinate North Korean leader Kim Jong Un, are flying off the shelves. But if North Korea gets its way, they’ll have a hard time restocking the film.

In a January 8 letter to the Ministry of Foreign Affairs, the North Korean Embassy asks the government to confiscate all copies of “The Interview” from Cambodia’s unruly DVD shops and keep the movie off big and small screens alike.

In the letter, the embassy complains that pirated copies of the film are already being “openly sold” at malls around Phnom Penh.

“This is generated by the plot of the hostile forces manipulating to break the long traditional friendship between the Kingdom of Cambodia and the DPR [Democratic People’s Republic of] Korea,” it says.

The letter asks the government “to take appropriate measure to see that the ‘Interview,’ byproduct of U.S. maneuvers against DPR Korea, would be no longer sold in the sublime Kingdom of Cambodia and also would never be broadcast on any Cambodian TV channel or shown at any movie house.”

Mr. Visalo declined to comment Sunday. But Information Minister Khieu Kanharith said the film would not be shown on television.

“Even before the letter from the Ministry of Foreign Affairs, my ministry already made request to all TV and Pay TV stations not to broadcast this film,” Mr. Kanharith said in a Facebook message.

“The traditional practice here isn’t to offend nor hurt the country having diplomatic relations with Cambodia,” he said.

Mr. Kanharith said the sale of copies of “The Interview” fell under the Culture Ministry’s purview.

Culture Minister Phoeurng Sackona said the movie would also not be making it to the big screen.

“We had a discussion about this, and with Facebook it’s difficult; we don’t know how to stop it,” she said. “As for the theaters, it will not be there.”

Cambodia’s unique relationship with North Korea dates back to the friendship between then-Prince Norodom Sihanouk and former North Korean leader Kim Il-Sung, forged in the 1960s while both countries were members of the Cold War’s non-aligned movement.

The prince withheld recognition of the South Korean government until his ouster in 1970. North Korea returned the favor by backing the prince’s initial resistance to the Khmer Rouge and the Vietnamese proxy government that replaced it. North Korea even built the exiled monarch a palace outside of Pyongyang and furnished him with a retinue of bodyguards.

The Cambodian government has banned movies before. It kept “The Wolf of Wall Street” out of theaters last year for its liberal use of expletives. It has also blocked screenings of a documentary that points a finger at the government for the assassination of Cambodian union leader Chea Vichea in 2004.

And attempts to limit the distribution of “The Interview” have seen success in other countries.

Pyongyang labeled the movie a terrorist act before it ever came out, and has been accused of hacking the computers of Sony Pictures Entertainment in retaliation. Anonymous threats to bomb U.S. theaters that screened the film forced it into a limited release there.

Last week, the New York Times reported that shop owners in Rangoon had copies of the movie confiscated by police.

Sin Chan Saya, who heads the Culture Ministry’s film censorship committee, said Sunday that North Korean officials had called him urging him to keep “The Interview” out of theaters. But he said their concerns were moot as no distributor was asking to show it.

Mr. Chan Saya said he knew the city’s DVD shops were stocking copies but added that pulling them would do Pyongyang little good.

“The people can see it on the Internet, on the YouTube…. How can we stop this?” he said. “I know the shops have it, but we do not control the DVD [shops].”

Brigadier General Long Sreng, deputy commander of the Interior Ministry’s economic police department, said Sunday that he was not aware of any orders to confiscate copies of “The Interview.”

At City Mall, every DVD shop had the movie for sale Sunday.

Dath Asy, who runs the mall’s CD City, said she sold more than 100 copies over the past two weeks.

“It’s almost sold out,” she said, holding up her last copy.

Pich Vannak, who runs the nearby DVD Center, said he had sold about 50 copies of the film in a week.

If authorities order him to pull the movie, Mr. Vannak said, his first concern would be his profits. Besides that, he added, “it restricts the rights of the people.”

And it would also rob his customers of a good movie, he said. The bawdy comedy portrays Mr. Kim as a lonely leader with major daddy issues, a soft spot for Katy Perry tunes—and a very violent temper.

The North Korean Embassy could not be reached for comment.