No Signs of Investigation Into Sokha Threats

Threatening messages were posted to the Facebook pages of Srey Chamroeun and Thy Sovantha over the past few days along with photographs of Ms. Sovantha shooting a gun, apparently as part of a campaign calling for Mr. Sokha to apologize for allegedly defaming the former CNRP activist in audio tapes leaked earlier this year. 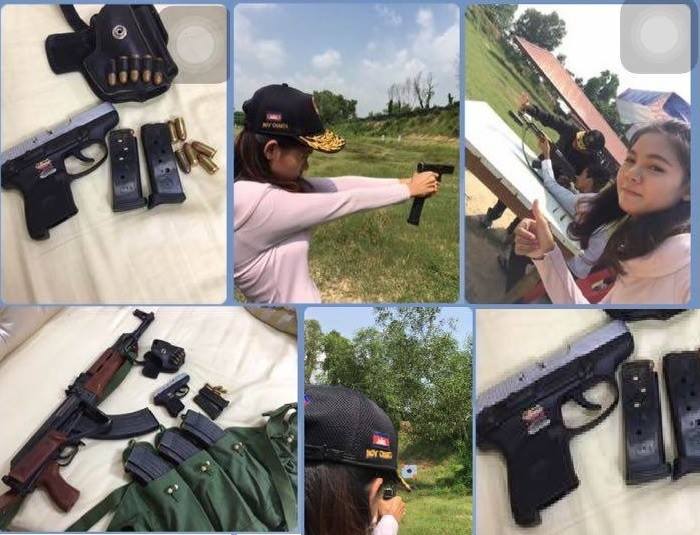 “I will hold demonstrations to demand that Kem Sokha apologizes to Thy Sovantha publicly. If not?????” Mr. Chamroeun wrote in a post on Thursday, alongside photos of Ms. Sovantha firing a pistol.

Similar posts appeared on Thy Sovantha II, a second Facebook page that the CNRP activist-turned-CPP-stalwart started after a public movement to unfollow her first page.

“There are a few,” one of the posts said, alongside images of several guns and Ms. Sovantha firing one. “Kem Sokha, please be careful.”

National Police spokesman Saran Komsath said he was not aware of the case, but would “ask our police to get details.”

Mom Sitha, deputy director at the Interior Ministry’s department of counterterrorism and transnational crime, which regularly investigates internet-based crimes, said there were no plans to look into the threats.

Five other Interior Ministry and National Police officials either declined to comment or could not be reached.

Ms. Sovantha and Mr. Chamroeun have spearheaded campaigns to undermine Mr. Sokha, who was granted a royal pardon earlier this month for charges related to a “prostitution” case that are widely seen as being politically motivated.

Leaked messages posted to Ms. Sovantha’s main Facebook page, which she claims was hacked, have fueled speculation that Prime Minister Hun Sen promised her $1 million to stir up trouble over the case. Ms. Sovantha could not be reached on Monday, but has posted messages to her Facebook page saying that lies are being spread about her and Mr. Chamroeun.

The apparent lack of concern among officials over the threats contrasts sharply with the case of a 26-year-old student in Siem Reap who threatened on Facebook to bomb his university graduation ceremony, which was to be presided over by Interior Minister Sar Kheng, due to repeated delays. The student was promptly arrested and handed a 15-month sentence, reduced to one month at the request of Mr. Kheng.

A 27-year-old migrant worker was sentenced to 6 months in prison last year for threatening on Facebook to “shoot the head of Sok Touch,” a researcher who is carrying out controversial border research for the government.