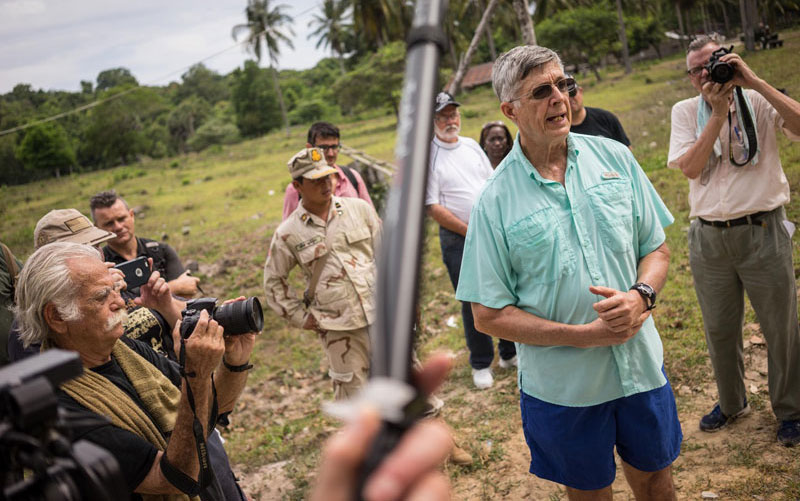 No Closure for US Veterans, Family in Mayaguez Incident

Carey Turner went to the U.S. Embassy in Phnom Penh on Friday looking for answers about his cousin Joseph Hargrove, one of three marines left on Koh Tang island in 1975 during the U.S. mission to rescue the crew of the S.S. Mayaguez, which had been captured by the Khmer Rouge after straying into Cam­bodian waters.

Exactly what happened to Mr. Hargrove and his two fellow ma­chine gunners—Gary Hall and Danny Marshall—during what is called the final battle of the Vietnam War, and why they were left be­hind, is a mystery that has driven Mr. Turner’s life for some eight years now.

Yet after a flag-raising ceremony at the U.S. Embassy on Friday to mark the 40th anniversary of the battle, Mr. Turner said his questions remained unanswered.

“There are serious questions that I want to ask and they don’t seem to want to answer them,” he said, referring to U.S. officials stationed in Phnom Penh, particularly members of the Joint POW/MIA Accounting Agency [JPAC], which has conducted excavations in search of remains on Koh Tang.

“I sensed that they had been instructed not to speak to me.”

On Tuesday, Mr. Turner took his third trip to Koh Tang, this time with seven veterans for a 40th anniversary ceremony that in­cluded Em Son, the Khmer Rouge commander who repelled the botched operation that cost 41 U.S. lives.

While Mr. Son has given numerous conflicting versions of what happened to the three soldiers who went missing in action, Mr. Turner said the U.S. government has failed to give him one.

“I was disappointed because, in the beginning, I was told that four members of JPAC would go with us [to Koh Tang] but for whatever reason they changed their mind,” he said.

The U.S. Embassy had no representative at the event and declined to explain why.

“I have to question why did they back out. Was it because myself, Em Som and [investigative journalist] Matt Burke were there?” Mr. Turner said.

During the Koh Tang visit, Clarke Hale, who was a platoon commander in the failed 1975 operation, said he was undecided over whether he would deliver a speech at the U.S. Embassy event that he said had been edited by a defense attache at the embassy.

Ultimately, Mr. Hale said he stood up on Friday and gave the speech as he originally intended.

“Everything was from the heart.”

Mr. Hale said that the embassy had “kind of ignored us all week,” and suggested that, “embarrassed” by the defeat, the U.S. was wary of any coverage of the anniversary event.

“It was a screwed up operation and they want to put it behind them,” he said.

Like Mr. Turner and other U.S. veterans in Cambodia this week, Mr. Hale said that 40 years on, he felt there was still no closure for the group due to the secrecy around the fate of the three gunners who went missing on the island.

“I want this publicized as much as possible. I want the world to know we are still here and I want my men back,” he said. “All the veterans want as much press as possible.”

Reporters from The Cambodia Daily were not among the five journalists invited to the ceremony at the U.S. Embassy on Friday. Public Affairs Officer Jay Raman declined to say why.

John Muller, commander of the Veterans of Foreign Wars Post 11575, which coordinated the week’s memorial events, said that the U.S. Embassy had finalized the guest list.

“They wanted to restrict media,” he said.