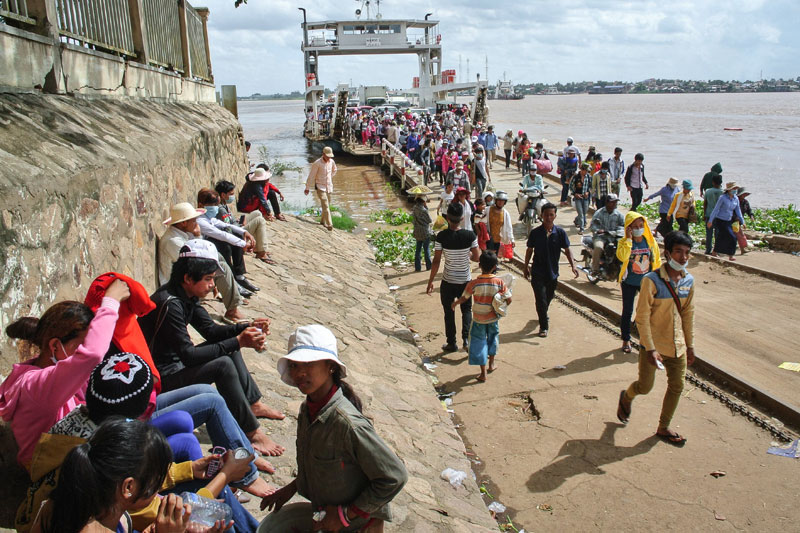 In the days before the 2013 national election, much of the country’s industrial workforce fanned out into the provinces surrounding Phnom Penh, returning home to cast their votes.

The opposition CNRP did well in those provinces, capturing the majority of National Assembly seats in Kompong Cham, Prey Veng and Kandal, along with seven out of 12 seats in Phnom Penh.

But an agreement between the CNRP and ruling CPP last month means that in future elections workers will be allowed to vote where they work, concentrating votes in the capital and reducing the portion of the electorate in neighboring provinces.

After a meeting of the bipartisan election law working group last month, Bin Chhin, head of the CPP’s delegation in the talks, said the number of National Assembly seats in Phnom Penh would increase by nearly 50 percent in the next parliamentary election, scheduled for February 2018.

“On the issue of nephews and nieces who have left home to work, we have authorized the NEC to issue directives and procedures allowing them to register [to vote] at the place where they work,” Mr. Chhin said.

“For example, workers from Prey Veng, Kompong Cham and Kompong Thom who have come to work in Phnom Penh can cast their vote in Phnom Penh, so they will not face the hassle of the round trip,” he said.

In Phnom Penh, Mr. Chhin said, “the [number of] seats will no longer be 12 like today; there could be an increase up to 17 seats.”

“I can say that the provinces neighboring [Phnom Penh] will see a decrease,” he added.

Of about 10 million eligible voters in the country, roughly a million have left their hometowns to work elsewhere in the country, mostly in the garment, construction and service sectors, according to Tun Sophorn, national coordinator for the International Labor Organization.

Some 400,000 of those workers are employed in the garment sector in Phnom Penh, he said, “so it will be extremely good for garment workers if they are granted the right to register where they work.”

According to a report on the 2013 election released by the Committee for Free and Fair Elections in Cambodia, “the youth population…already contains the majority of the Cambodian electorate when youth voters are defined as citizens between the age group of 18 and 35 years.”

Election monitors attribute much of the CNRP’s surprise success in the 2013 election to the growing importance of young voters and the newfound influence those voters—many of whom are the main source of income for their families—have on their parents and other relatives.

“The power relation between the families used to be the father, who was the breadwinner, telling his family who to vote for,” political commentator Ou Virak said Thursday. “But now, the children are making more money. So when they complain about the ruling party, for example, their parents have to listen up.”

This influence is felt regardless of where young workers are casting their votes—or even if they are among the hundreds of thousands of Cambodians working abroad and unable to take part in elections, Mr. Virak said.

“Even people who are working in Malaysia or Thailand, who don’t come back home to vote, they have a lot of influence back home,” he said.

Preap Kol, executive director of Transparency International Cambodia, which sent out hundreds of election monitors during the last election, said the return of workers to their home provinces did have a significant impact.

“According to our observations and our sources, laborers or garment workers who returned to vote in their respective provinces have influenced their parents to vote along with their choice,” Mr. Kol said, adding that garment workers leaned heavily toward the opposition.

“The CNRP had more support from the garment workers; they seemed to have policies that attracted more garment workers in general, because of the [$150] minimum wage they put into their policy,” he said.

But both Mr. Kol and Mr. Virak said the most important change that would come with the new registration rules is that more migrant workers would be able to vote, benefiting whichever party is able to garner their support.

“It depends on how the opposition party will perform between now and the election, and the policies that the government will be developing toward the laborers or factory workers,” Mr. Kol said.

“So we can’t say for sure how the election result will be impacted by this new measure.”

Autopsies set for two Koreans who died in Cambodia