Newly released maps using U.S. satellite data show that Cambodia continued to suffer major deforestation in 2013, much of it in nominally protected forests and wildlife sanctuaries.

In November 2013, the University of Maryland released what it said was the first study to combine a consistent measure of forest cover around the world with a high degree of precision—a resolution on the ground of 30 meters by 30 meters. Analyzing a trove of satellite data from 2000 to 2012, the study showed that Cambodia lost 7.1 percent of its forest cover over the past decade. 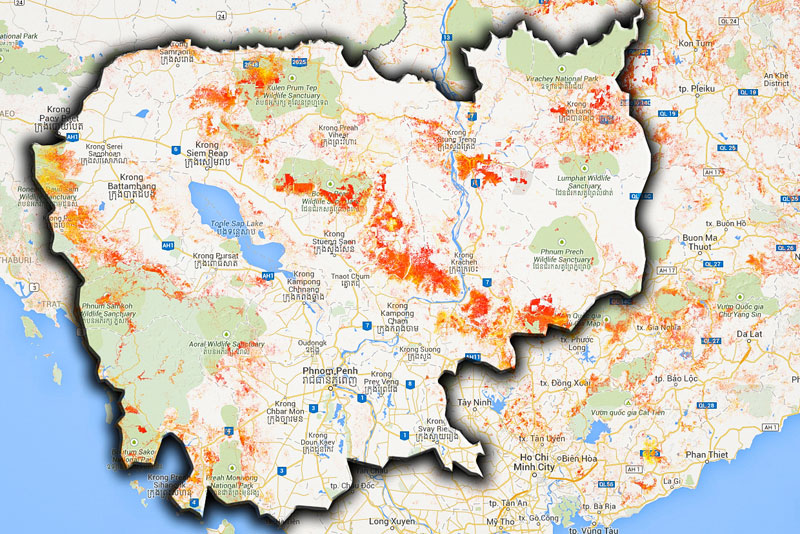 Updated maps released by the university this week showing deforestation over the course of 2013 suggest that the pace of deforestation in Cambodia has not slowed, and may have even increased.

Mathieu Pellerin, a consultant on land issues for local rights group Licadho, called the amount of deforestation in 2013 shown on the new maps “pretty shocking.”

Made using satellite data and posted online, the maps show notable deforestation across the country, even compared to the heavy losses that occurred during the previous 12 years.

Much of the new deforestation appears to spread out from areas of earlier forest loss, most of it stretching diagonally across the middle of the country from Preah Vihear province in the north, through Kompong Thom and Kompong Cham, and into Kratie province in the east. Significant new patches of forest loss also show up in the west near the Thai border, on either side of the Mekong River around Stung Treng City, and in Ratanakkiri province in the northeast.

Though the University of Maryland did not provide total forest cover change figures by country, it did release raw data for the entire planet.

Licadho’s Mr. Pellerin, who analyzed the raw data, said it was clear that the commercial-scale land concessions the government was granting to private companies inside protected areas were still driving much of the new deforestation.

“This means the government could have prevented 51 percent of the deforestation in 2013 if it had not granted [concessions] over forested areas,” he said. “That is big.”

He said the new maps also show deforestation spreading from inside the concessions beyond their borders.

The country’s laws forbid concession holders from logging healthy forest inside the boundaries of their government-granted tracts. When firms do log inside the concessions, the government often defends them by claiming that the forests being cut down—even protected forests —are “degraded.”

Deforestation figures the University of Maryland released in 2013 revealed that more than two-thirds of deforestation during the previous decade occurred in the areas of densest cover.

The university’s data on Cambodia’s deforestation rate also differs markedly from the government’s figures. The government claims the country lost only 0.5 percent of its forest cover between 2002 and 2006. In 2010, it said only 2 percent had been lost since 2006.

Chheng Kim Sun, director general of the Ministry of Agriculture’s Forestry Administration, said Thursday that those were the still the government’s most recent figures. He said the government was in the process of gathering satellite data of its own, and that new figures could be ready in 2016.

Mr. Kim Sun said he had not seen the University of Maryland’s data. He did not reject its deforestation figures outright, but argued that how you calculate forest cover, and forest cover change, depends on your definition of a forest. He said there were more than 200 definitions of the word around the world.

Both Cambodia and the university say forests exist only where vegetation stands at least 5 meters tall. But while Cambodia requires only 10 percent of an area to be covered by that vegetation for it to be called a forest, the university appears to require that it cover at least 25 percent.