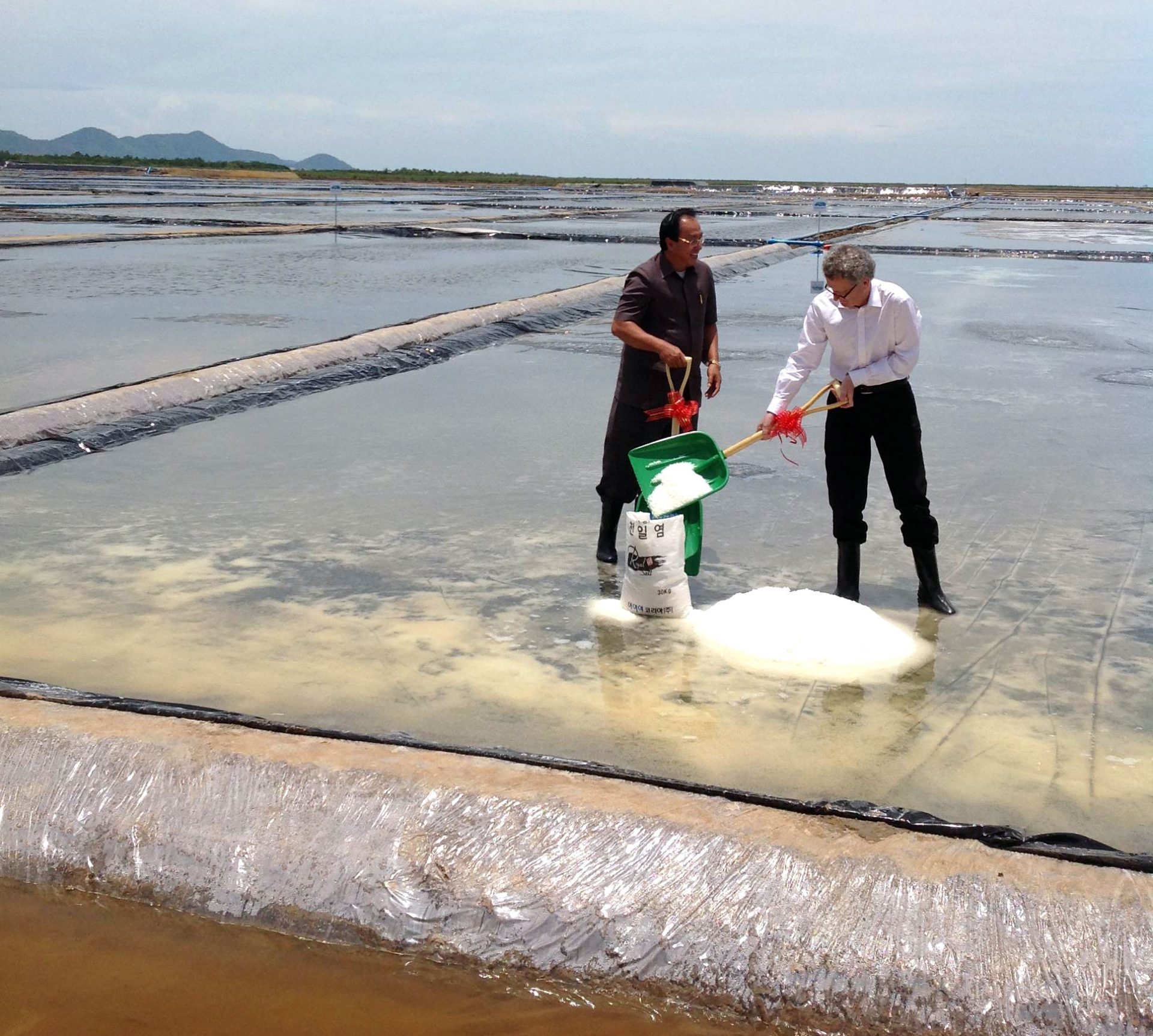 In a ceremony among Kampot’s vast fields of coastal saltpans and low levees, company representatives from Asia Salt (Cambodia) Co., Ltd. inaugurated a $2.9 million venture, which hopes to produce 20,000 tons of salt each year for export.

The first shipment of salt bound for South Korea is expected to leave between July and September. InfraCo’s non-executive director Peter Bird said the project would employ 350 local people on a 120-hectare salt farm.

“It should also demonstrate new farm design and techniques to improve quality and yields,” Mr. Bird said. “In addition to providing direct jobs, we hope that its success will lead to improvements in the other farms and improve the livelihood of 10,000 people for this salt farming sector.”

“We are conserving about 30 acres [about 12 hectares] of coastal mangrove for coastline protection and we’re maintaining an ecological zone,” he added.

Whereas the existing salt farms in Kep and Kampot provinces currently use traditional methods, Asia Salt’s 120 hectares—which have been rented from local landowners—are covered with plastic sheets, and surrounded by plastic piping used to regulate the flow of sea water into ponds.

“The big difference is the Korean technology makes a very good quality of salt. We lay plastic and cement. It’s the details that give quality,” said Mr. Sang, adding that the finished salt would be packaged and exported from the port in Sihanoukville.

“The plan is to build a [packaging] factory this year. It will be done in Cambodia.”

“If you offer a lot of jobs here, people don’t need to migrate to other countries because they can find work here,” Ms. Sao Thorn said.

According to Um Chhun, secretary of the Kep-Kampot Salt Producer Community, the region has about 4,500 hectares of salt farms, together producing 80,000 tons of salt last year—a low yield due to heavy rains.

“The quality [of Cambodian salt] is still low compared to neighboring countries, Thailand and Vietnam, so we can’t export. We sell it locally,” he said. Mr. Chhun said it would be difficult for producers to move up to modern techniques, which are costly to implement.

The Asia Salt project is the first to be launched by InfraCo Asia, a new initiative of the donor-funded Private Infrastructure Development Group, based on a model that has been operating in Africa since 2005.

According to a statement, InfraCo Asia is funded by the U.K.’s Department for International Development, the Swiss State Secretariat for Economic Affairs and AusAid.