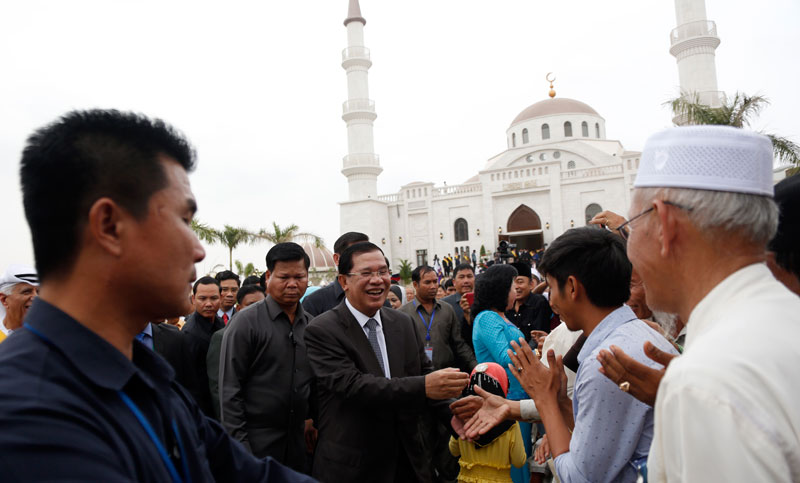 At the edge of a sand-filled Boeng Kak lake in Phnom Penh on Friday, Prime Minister Hun Sen inaugurated the country’s newest—and largest—mosque, which was privately funded by a Dubai-based businessman at a cost of $2.9 million.

The palatial, white-tiled Alserkal mosque served as stage for a speech from Mr. Hun Sen in which he lauded the country’s religious tolerance to an audience made up largely of Cham Mus­lims, some of whom had traveled from the provinces for the occasion.

There are roughly 350,000 Muslims in Cambodia, and the religious minority has been a reliable voting bloc for Mr. Hun Sen’s ruling CPP.

An estimated 70,000 Cham Muslims died under the Khmer Rouge, and they were afforded only limited religious freedom during the 1980s. Many have remained loyal to the CPP because of the party’s tolerant religious stance.

“We see the world, in some countries religion has broken the nation,” Mr. Hun Sen told his audience Friday. “But for Cambodia, I can proudly to say that we have lived together peacefully among races and religions.”

Mr. Hun Sen noted the government’s policy allowing Muslim girls to wear hijabs to state schools—an issue that other countries, including France, have struggled with—and called on business owners to find space in their establishments for prayer.

“The Cambodian government has decided that Muslim women can use Muslim clothing to go to [state] schools,” Mr. Hun Sen said.

“I send a message to people who run businesses like hotels: If they want Muslim customers to stay at their hotel, you should prepare rooms for praying,” he added.

After the prime minister’s speech, a call to prayer rang out and an estimated 1,000 Muslims prayed shoulder-to-shoulder in the packed halls of the two-story mosque, which replaced an older mosque on the same site. Due to the size of the crowd, some prayed on the building’s steps.

The construction was funded by Dubai-based import-export businessman Eisa bin Nasser, and took three years to complete. It is the biggest of Cambodia’s 520 mosques, according to Cambodian mufti Sos Kimri.

Inside the air-conditioned prayer halls, the walls are lined with rose and turquoise tiles, the ceiling covered in tessellating mosaic and a grand chandelier hangs from the central dome vaulting. The calligraphy and ceramic were commissioned from Algerian artisans, Mr. bin Nasser said.

Washing parts of their body in a pre-prayer ritual at two gazebos flanking the mosque, worshipers then trickled in: men into the main hall, women into a separate, smaller room to the side.

“I came to see the new mosque and I am very happy to see it,” said San Isan, 56, from Takeo province. “Our mosque is not beautiful like this because we are poor and do not have money.”

Correction: A previous version of this story misspelled the name of Alserkal mosque as al-Sakka.