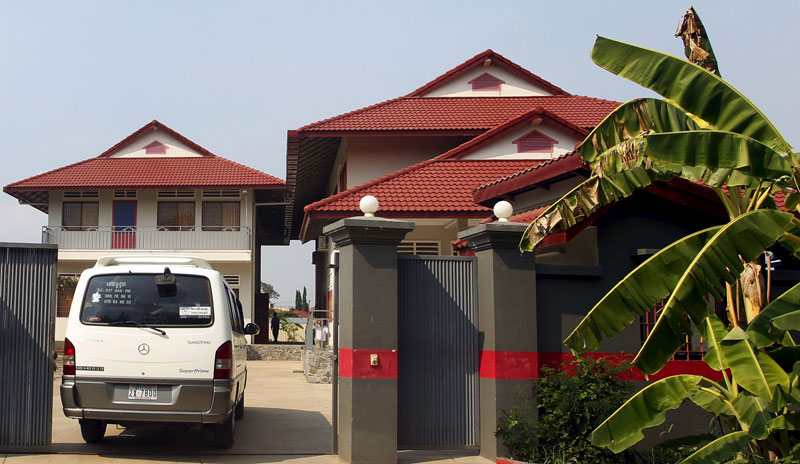 In a sprawling villa down a quiet dirt road in Phnom Penh’s Chbar Ampov district, four refugees have reached what not so long ago would have seemed like an inconceivable end destination.

The three Iranians and one Ro­hingya from Burma fled their homelands seeking a better life in Australia, but wound up in an Australian-run detention center on the South Pacific island of Nauru with hundreds of other asylum seekers.

With Australia refusing to take in any refugees who try to reach its shores by boat, the four have placed their hopes on a deal Canberra made with Phnom Penh in September to resettle any refugees on Nauru who volunteer to move to Cambodia.

After having their applications approved by the Cambodian government and spending several weeks waiting in the Australian city of Darwin, the first participants in the scheme landed in Phnom Penh on Thursday morning.

They were quickly ushered into a van and taken to their new home in the south of the city, beginning a process of integration into the local community.

Joe Lowry, the regional spokesman for the International Organization for Migration (IOM), which is assisting in the resettlement process, said on Friday that the refugees were settling in well.

“They were looking forward to getting into cultural orientation starting today and starting language classes on Monday,” Mr. Lowry said of the group, which the IOM says has requested to stay away from the media.

“They haven’t seen much [of Cambodia] yet, they had Cambodian food last night and they enjoyed that,” he said.

Outside the villa, which is adorned with large red arrows, a security guard said she did not know who was living inside and did not have permission to speak with reporters.

Several people living near the villa were cautious about their new neighbors on Friday.

“I feel a bit scared about the refugees staying here, because I don’t know about their character or attitudes,” said An Sophat, 62, who has a roadside stall about 20 meters from their home.

Ms. Sophat said that she had not received any warning about their arrival, and was taken aback when they showed up in her neighborhood.

“Yesterday, I saw a lot of cars coming here and I was surprised, I wondered what was happening,” she said. “I saw the cars of the IOM, they drove the foreigners into that building.”

Like Ms. Sophat, another resident of the area, Hun Dany, 23, said that she was apprehensive about the new arrivals.

“If I met them outside my home, I could talk with them, but I could not invite them into my home because I don’t know them properly, so I don’t know whether to believe they are good or not,” she said.

But Hang Raksmey Phalla, 31, who lives next to the compound, said she was unconcerned about the presence of the refugees in the area.

“I feel fine about this, because Cambodians also go to live in other countries,” she said.

Asked if she would welcome the group into the community, Ms. Phalla, who works at the Ministry of Water Resources, said “I will observe them first.”

“If they come to visit my home and are truthful and honorable, I will have friendly relations with them,” she said.

Australia, which is giving Cambodia an additional AU$40 million ($30.4 million) in aid as part of the refugee transfer deal, is hoping the four will have a smooth transition to life in Phnom Penh so that others on Nauru follow suit.

The Australian government is also paying AU$15.5 million ($11.8 million) for the resettlement program, a figure Australian Immigration Minister Peter Dutton reportedly said would not increase at a press conference in Brisbane on Friday—regardless of how many refugees take up the deal.

Khieu Sopheak, spokesman for Cambodia’s Interior Ministry, could not be reached.