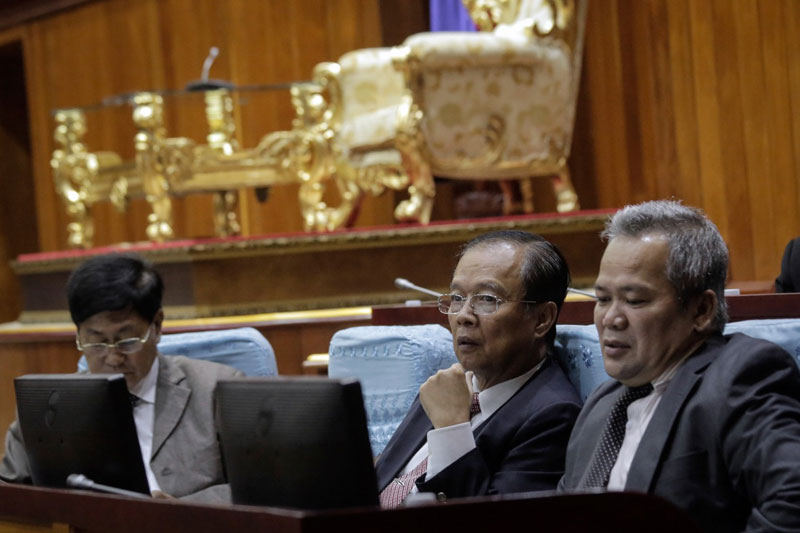 The National Assembly approved the first two chapters of a new 12-chapter Land Traffic Law on Monday as lawmakers from the ruling CPP and opposition CNRP came together to push through legislation intended to bring down the high rate of deaths on Cambodia’s roads.

With 109 of 123 lawmakers present, the two chapters, which contain the new law’s preamble and articles concerning traffic signs, passed with nearly unanimous support.

In the debate leading to their passage, opposition leader Sam Rainsy drew on a motif made popular by Prime Minister Hun Sen in recent years by comparing road deaths to the massive loss of life in the “Killing Fields” of the Khmer Rouge.

“We very much welcome this law because we have been waiting a long time,” Mr. Rainsy said.

“A lot of Cambodians were killed during the Khmer Rouge regime, but there is a new phenomenon that can be called ‘the Killing Streets’ because thousands of people die every year and tens of thousands are injured,” he said.

Earlier this year, Mr. Hun Sen delivered a speech at the opening of a new road in Battambang province comparing the average of five deaths per day on roads to the country’s two decades of conflict before, during and after the Khmer Rouge regime.

“Even during the years of war people did not die every day, yet on average more than five people die every day in Cambodia due to traffic accidents,” he said at the time.

With Mr. Hun Sen absent from yesterday’s Assembly session, Mr. Rainsy took center stage and spoke out against the frequency with which those who cause fatal accidents avoid prosecution by paying compensation to the victims or their families.

He said compensation should not expunge criminal cases.

“It is just to ease suffering, but do not allow those who crash and kill others, especially when it is caused by carelessness and alcohol and high speeds, [to escape punishment] because they have power and influence,” he said. “They have to be punished.”

Transport Minister Tram Iv Tek said that last year, 1,950 people died and 5,671 were seriously injured on roads, an average of 5.3 dead and 16.5 seriously injured per day, and that this year was looking worse.

He said that 1,772 people had been killed on Cambodia’s roads as of the end of October, about 5.9 per day.

“Traffic accidents make Cambodia lose a lot of money each year, and this does not include the social consequences like the orphans, the widows, the handicapped people and the impoverished people,” Mr. Iv Tek said.

The transport minister said the new traffic law was developed with the main causes of road deaths in mind.

“There are three factors that have caused a lot of people to die: The first is speeding, the second is drunkenness and the third is not wearing helmets,” he said.

The National Assembly will meet again Wednesday to vote on the new law’s remaining chapters, including proposed fines of between 800,000 and 4,000,000 riel (about $200 to $1,000) for driving with a blood alcohol above the legal limit.