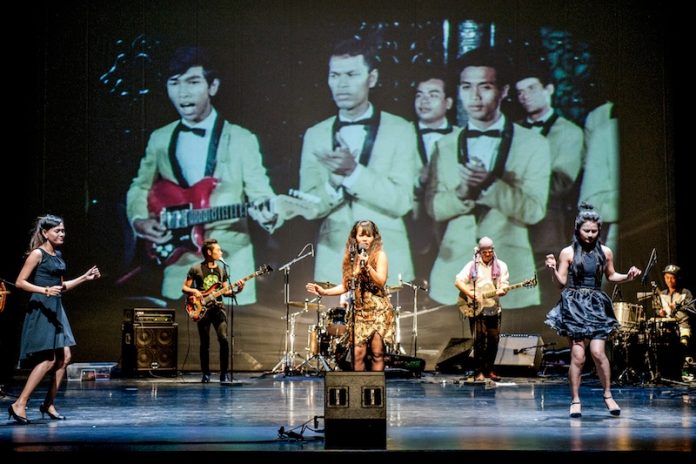 It may seem to be only in its infancy now, but back in the 1960s and early ’70s—before the Khmer Rouge’s brutal regime sought to eradicate all forms of art—Cambodia’s music scene was booming.

As Western influences spilled across the region during the Second Indochina War via radio and the odd television set, a distinctly Cambodian brand of rock ‘n’ roll flourished. Traditional Khmer rhythms were fused with the psychedelic surf rock to create a sound that would form the heart of what is now known as the country’s “golden era” of music.

But by the end of the Second Indochina War and Cambodia’s own civil wars, most of the golden era’s stars and promoters had been killed, their recordings destroyed, and the sound never fully returned to its former glory.

This lost generation of art has fueled local ensemble The Cambodian Space Project to embark on a national tour of not only live performances and recording, but also cultural and musical discovery.

“It is important for us to do this. It should be an incredibly enriching—and surprising—experience,” said Julien Poulson, the Australian lead guitarist and manager of the band.

Bringing a whole host of international and local artists and musicians with them, the band’s U.S. Embassy-funded “Motown to the Mekong” road show aims to rediscover Cambodia’s infatuation with rock fusion.

The Space Project convoy will hit the road on April 30—with photographers, filmmakers, writers, dancers, visual artists, producers and other musicians in tow—and will stop between gigs in Phnom Penh, Siem Reap, Battambang, Kampot and Sihanoukville to hold educational workshops with local arts groups and NGOs.

Mr. Poulson, who has been based in Cambodia since forming the band with front-woman Srey Channthy six years ago, said that artists signed to Motown—the funk and soul label founded in Detroit in 1959—had a particularly significant influence on early Cambodian rock music, but the Khmer twist created something unique.

“Sometimes they’d perform straight covers or loosely reference Western songs, but they always made it their own,” Mr. Poulson said of those pioneers, adding that the revival of this part of history had been a slow process, but one that was helped along by the success of the 2014 documentary “Don’t Think I’ve Forgotten: Cambodia’s Lost Rock and Roll.”

The film features one of the few surviving musicians from Cambodia’s pre-Khmer Rouge era, Touch Tana, who was a member of the popular 1960s rock band Drakkar (now touring with new members under the name Drakka Band).

The Space Project has enlisted Mr. Tana as a guest speaker at one of their tour’s stopover events, the “Motown to Mekong” panel, set to take place at Chinese House in Phnom Penh on May 6 along with Australian music biographer Clinton Walker and American producer Jim Diamond.

When the crew heads to Siem Reap for their May 13 show, they’ll also hold an open recording session at 60 Road Studios, where curious locals will be welcome to stop by and witness the process.

The finished recordings will serve multiple purposes, going toward a new album as well as a soundtrack for a play and documentary The Space Project is producing, both of which center around the theme of reviving Cambodia’s lost musical era.

The band’s enchanting singer, Ms. Channthy, who will bring her 10-year-old son on the tour, said songs from the lost era had drawn her to making music in the first place.

“I’m interested in creating songs from the ’60s and ’70s rock ‘n’ roll era, because their meanings are real and similar to my own difficult situation,” said Ms. Channthy, a former sex worker who was not formally educated past third grade.

Despite the band’s international success, Ms. Channthy said she remains insecure about how she is regarded by Cambodian audiences.

“But I hope after these past six to seven years—when people started to listen to Khmer music from the ’60s and ’70s again—they have started to support what I have created,” she said.

Mark Chattaway, manager and bassist for The Kampot Playboys, another throwback fusion band, agreed that the local music scene had ducked in and out of view in the past few years, but that the most recent signs were positive.

“I don’t think Cambodian parents were so supportive of their kids playing music professionally—they’d prefer them to be lawyers or doctors—but I think that’s starting to change,” he said.

While the upcoming tour places an emphasis on giving back to the local community and encouraging Cambodians to get involved in music, Mr. Poulson said it was also about grabbing the attention of international audiences, who have the power to expand the country’s music culture.

“What we’re doing is interesting, because an amalgam of artists are specifically coming to Cambodia to work together—rather than people leaving Cambodia, which is what normally happens,” Mr. Poulson said.

“It’s definitely a part of something new that’s happening here,” he added. “Five years ago we wouldn’t have had the opportunity—it’s unimaginable.”