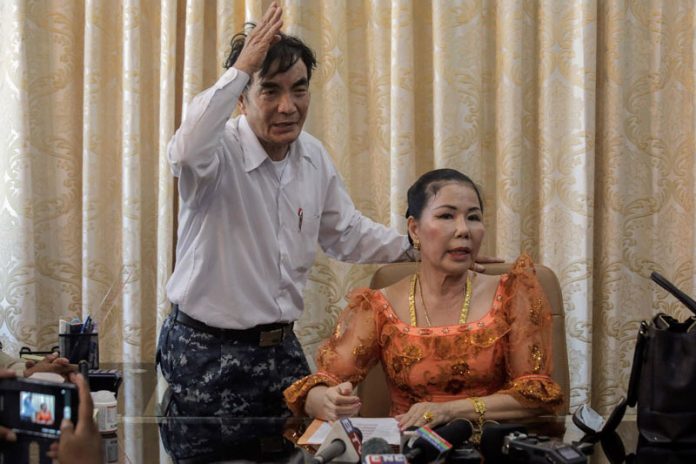 In a raid last night, municipal police arrested the father and mother of a senior Defense Ministry official suspected of being the “mastermind” behind the murder of a prominent businessman in Phnom Penh last month, only hours after the parents announced they had sent their son into hiding.

Major General Thong Sarath, a deputy cabinet chief at the Ministry of Defense, is suspected of coordinating the brutal killing of tycoon Ung Meng Chue, who was shot six times outside a fruit store on the evening of November 22.

“Phnom Penh municipal police chief Chuon Sovann said that Oknha Thong Sarath is the mastermind in the slaying of Ung Meng Chue,” says a message posted to City Hall’s Facebook page at about 8 p.m., which was accompanied by photos of police surrounding a house belonging to Maj. Gen. Sarath’s family.

Deputy municipal police chief Chuon Narin confirmed that the general’s parents were arrested at their villa in Meanchey district’s Chak Angre Krom commune, and said they were escorted to municipal police headquarters for questioning.

“We have detained four people and about 8 bodyguards for questioning, and we have confiscated six guns and we are still looking for [Maj. Gen. Sarath],” he said.

Some 50 armed police officers were seen at the Chak Angre Krom residence shortly before 9 p.m., some guarding the house with AK-47 assault rifles, others using flashlights to search for evidence inside.

Police also searched a home in Boeng Tompun commune belonging to Maj. Gen. Sarath, who holds the title of oknha—an honorific bestowed upon wealthy businessmen, typically with close ties to the ruling CPP.

“We have not found [Maj. Gen. Sarath] yet,” City Hall spokeman Long Dimanche said by telephone at about 9 p.m. “The authorities are working.”

Last night’s arrests came hours after Maj. Gen. Sarath’s parents, Thong Chamroeun and Keo Sary, called an afternoon press conference at their home, blasting the municipal police for seeking to arrest their son and demanding that Phnom Penh police chief Chuon Sovann resign from his position over his handling of the case.

“If police look down on my son, it is like they look down on Samdech Euv [King Father Norodom Sihanouk],” said Ms. Sary, the general’s mother, explaining that it was the king who had made her son an oknha. She said police were using “wild laws” to implicate him.

“Today, Mr. Sovann lied and asked my son to pick up his three bodyguards,” she said. “I did not allow my son to go because of the police’s black heart.”

Ms. Sary said she offered to go to the police headquarters instead, and that Mr. Sovann asked her to bring a fourth bodyguard with her, which she did.

Police then detained the fourth bodyguard and failed to release the other three, Ms. Sary said. After several hours of waiting, she said, she left the station and warned her son to flee.

Mr. Chamroeun, the father, told reporters that police should not have “beaten and given money to my son’s bodyguards to confess and place blame on my son.”

“Today, they did wrong by law,” he said.

Ung Meng Chue, who was chairman of the Shimmex Group, whose subsidiaries sell construction materials, jewelry, home furnishings and real estate, was gunned down just after stepping out of his Lexus SUV to buy fruit at a shop in Phnom Penh’s Chamkar Mon district.

Maj. Gen. Sarath, whose family owns a range of businesses including the Meanchey International Investment firm, vehemently denied on Tuesday that his bodyguards played any role in the murder. He said police suspected that one of his bodyguards, whom he identified only as Sna, was behind the crime.