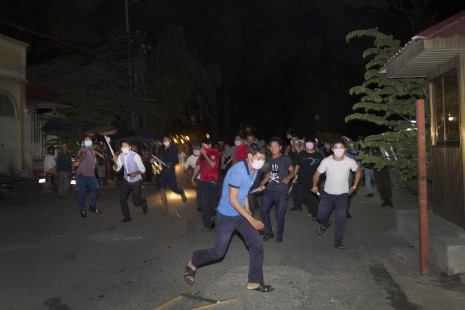 All the streetlights around Wat Phnom had been switched off. The area was in complete darkness. In hindsight, it was obviously in preparation for the coming attack.

The masked men, most wearing dress pants, long-sleeved button-down shirts and gold jewelry, began running—they were angry. A group of about 15 closed in on a fellow journalist and myself.

It was clear the men were targeting anyone participating in or monitoring the peaceful protest at Wat Phnom last Sunday night. It was also clear that the many po­lice and military police officers nearby were not going to stop the unprovoked attack. In fact, the police at Wat Phnom were facilitating, and appeared to be working in concert with, the mob of men who had surrounded us.

The masked men, yelling, shocked my colleague multiple times with an electric prod. A uniformed police officer moving with the mob made a grab to take my colleague’s camera. I showed my media pass, identifying myself as a journalist. They used their cattle prods.

Shrieking from the bolts of electricity administered to several points on his body, my colleague ran. I turned to walk away. Cow­ardly, one of the men shocked me in the back as I tried to leave.

It hurt. I screamed.

The injury I sustained was neither particularly large nor particularly painful after the initial jolt, and does not compare to the other serious injuries that people sustained that night.

Human rights observers and several peacefully demonstrating anti-eviction activists were attacked by another contingent of the masked men on the opposite side of Wat Phnom near the Electricte du Cambodge office.

Three women, two of them elderly, were taken to Calmette Hospital for treatment. One had been hit in the forehead, just above the eye, by a large marble fired from a slingshot by one of the men. Another woman in her 70s had been hit square in the chest by a marble. The third woman had been pushed to the ground and kicked, requiring stitches to her head.

Seven journalists and human rights monitors received less severe injures, including my colleague, who was also hit in the back of the neck with a marble after he had been shocked by a member of the mob. Another international journalist was struck in the neck and back with a wooden baton, and then shocked. She also had her back turned to the man who attacked her.

New York-based Committee to Protect Journalists, several overseas press clubs as well as other international media have condemned the attacks.

Peaceful demonstrators have long been the targets of strong-armed police responses, and that may explain why neither the activists nor the journalists injured at Wat Phnom last Sunday night have filed police complaints against the mob assault.

On Tuesday afternoon, I went to Daun Penh district police offices to file a complaint against the masked man who had attacked me with the electric prod. A police officer at the station said that the complaint had to be lodged in the area where the at­tack took place. I went to the Wat Phnom commune police office. There were three officers at the commune police station: Two were sleeping, one was watching kick­boxing, and none wore uniforms or any form of identification.

The officer watching TV asked what had happened to me: Had I participated in the protest? Had I lost any property? He then went outside to make a phone call.

“Go to the tourist police,” he said after making the call.

The attack had occurred just a few hundred meters from his station, so I told him I would prefer to lodge the complaint at his office.

“No, you have to go to the tourist police,” he said, suggesting the Immigration Police office near Phnom Penh International Airport.

“They deal with foreigners,” he said.

“The immigration police can forward your complaint to the court.”

Insisting that I would prefer to file the complaint at the commune police post in the area where the attack occurred, I asked if there was a law against filing such a complaint.

“No, it’s not against the law. But you have to go to the immigration police,” said the officer who, deciding that the conversation was over, stood up and left the building to get on his motorbike. Before leaving, the police officer insisted that it was his “right” and his “freedom” to not state his name or rank.

I returned to the Daun Penh district police office. An officer said everyone was busy working at the National Assembly. Asking for his name and rank, he too replied that it was his “freedom” not to divulge either. Come back tomorrow, he said.

I returned the next day just after 8 a.m. After an hourlong wait, Daun Penh deputy penal police chief Bun Thel arrived to conduct an interview. I showed a picture my colleague had taken of the red burn mark that was left on my back after the masked man had shocked me. I also had a short video clip of the attack.

In the video, a man in a green police uniform with a badge on the right shoulder and a two-way radio walks by as my colleague and I are attacked with the electric prods by the gang of masked men.

Though the video distinctly shows electric shocks being administered, and a uniformed police officer present, Daun Penh district police said the quality of the video wasn’t good enough. And they certainly couldn’t see a police officer in the footage. I rewound the video and showed it several times, and several times the officers viewing the video were unable to see the police officer that could clearly be seen on the screen.

Shortly before noon, I had answered all questions, written a statement and thumb-printed the complaint document.

On Thursday, deputy district police chief Preap Borei said that the complaint had been forwarded to his superiors and that he was waiting on an order to investigate the Wat Phnom attack.

Contacted Friday, Mr. Borei said that he still didn’t know if the complaint would be investigated, but he was sure that progress was underway.

Lieutenant General Khieu Sopheak, spokesman for the Interior Ministry, clarified a few things his lower-level colleagues seemed to be unaware of.

“If you are a foreigner, you can go to the commune police, the district police, the immigration police, it doesn’t matter. Any police station, they have to re­ceive your complaint,” he said.

Asked if the Interior Ministry is investigating the Wat Phnom attack, Lt. Gen. Sopheak said it was very unlikely.

He said the protest at Wat Phnom was unauthorized, and that journalists should not have been at an unauthorized event.

The demonstrators “should be in handcuffs if they don’t have permission,” said Lt. Gen. So­pheak, adding that journalists also need direct permission from authorities before they can go anywhere.

Journalists “should have informed me of where you go, how long [you go for], when and where,” he said.

“Freedom is only under the law. Outside the law, you have no freedom. They were only injured because they did not have the law to protect them.”