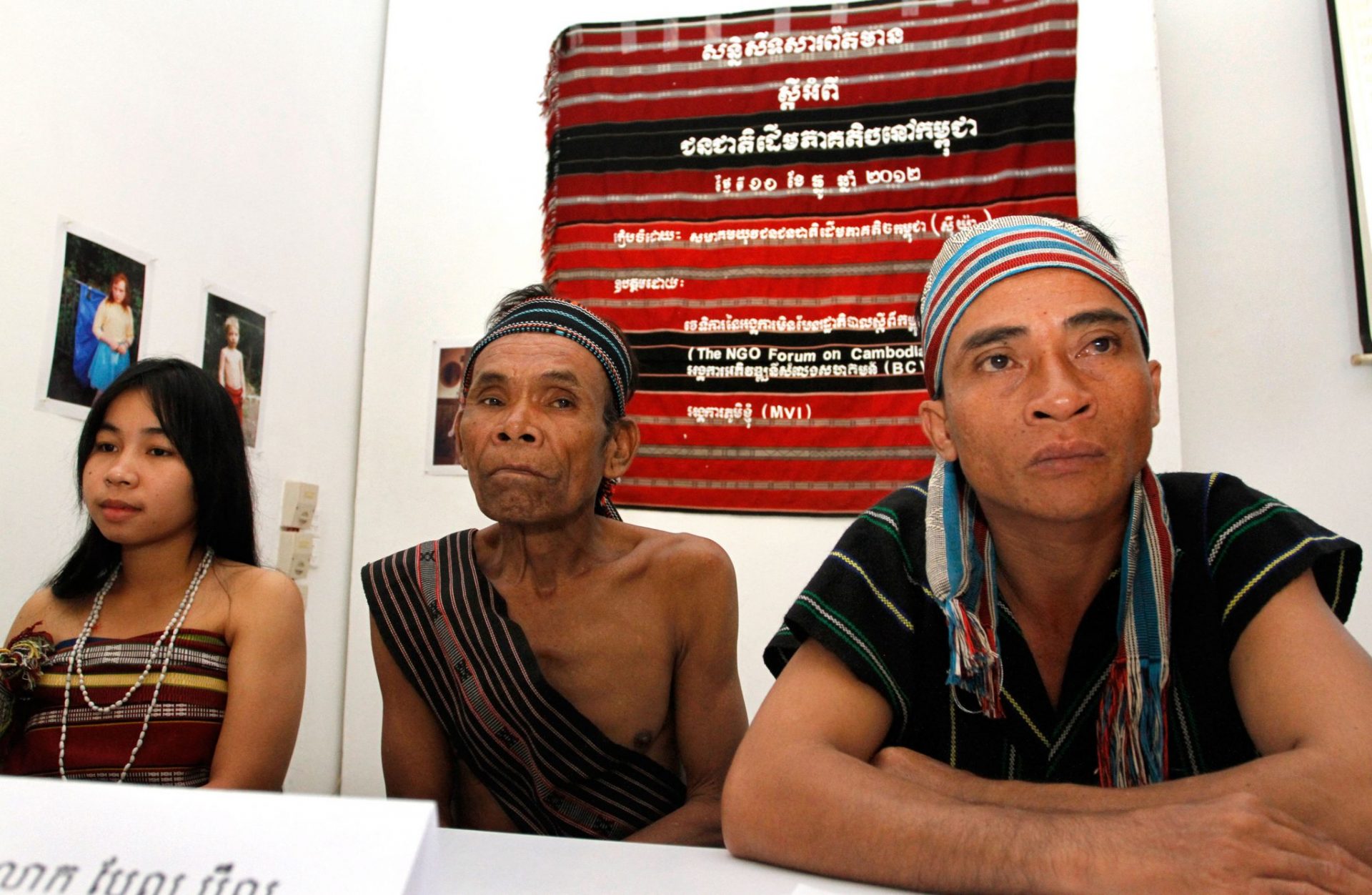 Members of seven ethnic minority communities donned their traditional attire yesterday for a press conference in Phnom Penh where they demanded that CPP lawmaker Chheang Vun travel to Mondolkiri province to apologize in person for a derogatory remark he recently made against indigenous people in the National Assembly.

During a parliamentary debate on November 14, Mr. Vun called Human Rights Party President Kem Sokha a “Bunong”—the name of the main ethnic minority group living in Mondolkiri province, but which is also used as a derogatory term in the Khmer language to mean uncivilized or savage.

“The first time we heard the lawmaker say such a stupid thing about this ethnic community, we were angry because it is also discriminating against our minority community,” Siu Heam, 66, an ethnic Jarai minority member from Ratanakkiri, said during the press conference at Meta House on Sothearos Boulevard.

“We don’t want him to delay the [Mondolkiri] trip to apologize because he is a lawmaker,” said Bleal Bil, 71, an indigenous Bunong minority, who wore a traditional, hand-woven hilltribe sash and bandanna.

“He sets an example as a lawmaker,” Mr. Bil said, adding that if Mr. Vun delays making such an apology it will mean that others can follow his bad example.

After his derogatory remark on the floor of the assembly and the ensuing outcry from the Bunong community, Mr. Vun then sought to excuse himself by stating that the Bunong minority did not even exist as a distinct people within Cambodia’s borders—further enraging members of the community.

Under pressure, Mr. Vun finally made an apology for his comment in the National Assembly last week, though indigenous rights groups have continued to demand he make a pilgrimage to Mondolkiri province’s Dos Kromam Mountain, which is sacred to the Bunong, to offer wine, incense and sacrifice a water buffalo so that the forest spirit and the community’s ancestors are appeased.

Mr. Vun, who is currently outside the country, said last week that he plans to visit Mondolkiri in the middle of next year.

During their press conference yesterday, a panel of representatives from the Bunong, Tampoun, Jarai, Kuy, Souy, Por and Kreung ethnic groups described their different ethnic traditions and ways of life, which are very distinct to Cambodia’s majority Khmer population.

Yun Mane, chairwoman of the Cambodian Indigenous Youth Association (CIYA)—which organized the conference—said that the Bunong tribal group dates back centuries and is one of the oldest in the country.

“I appeal to all the people not to say that Bunong people are cruel, who kill their children, and who are uneducated,” Ms. Mane said. “We are human beings as well,” she said.

Phay Siphan, spokesman for the Council of Ministers, said that Mr. Vun had already shown sufficient remorse for his mistake and that he has made plans to travel to Mondolkiri to talk directly to community members.

“He already came out and apologized publicly and said that he did not mean to offend the tribes, and his job is to develop the northeastern area,” Mr. Siphan said. “I think he will be a good partner with those tribes.”

It is not the first time Mr. Vun has made headlines for comments he has made. As Cambodian ambassador to the U.N. in Geneva in 2005, Mr. Vun engaged in a public debate with the U.N.’s human rights envoy to Cambodia Peter Leuprecht, who had criticized the Cambodian government for denying that impunity existed in the country. During the session, Mr. Vun said Mr. Leuprecht was suffering from “impatience, intolerance and lack of realism.”

Linguistics professor Ros Chantrabot, who is deputy director of the Royal Academy of Cambodia and  an adviser to Prime Minister Hun Sen, was invited to the press conference but did not attend.

Mr. Chantrabot said later that he did not believe Mr. Vun should be pushed to make a pilgrimage to Dos Kramom Mountain.

“The Bunong community should accept the apology of Mr. Vun and just finish it,” he said. “They should not demand Mr. Vun to go there as it would be the same as making him lose face.”

Representatives of the ethnic minorities yesterday also expressed concerns during the press conference about how their traditional culture will be affected if some of their community members accept individual land titles —currently being distributed under Mr. Hun Sen’s titling scheme—instead of waiting for communal land titles.

About 400 ethnic Bunong families in Pech Chreada district’s Bosra commune were issued private land titles on November 15 after their land was measured by Mr. Hun Sen’s student volunteers, effectively canceling out their eligibility for a communal land title.

Ethnic groups traditionally share large swathes of land, which they use communally for farming, and some feel private titles will erode this aspect of their culture.

Mr. Heam, the Jarai man from Ratanakkiri, said student volunteers are currently in his district, O’Yadaw, to demarcate 1,000 hectares of land for private land titles.

“We are not sure yet how we will be affected on our communal land titles if we have individual land titles. We are still discussing this,” Mr. Heam said at the press conference.

“In general, the minorities want the communal land title because they can use is as a community—it can remain our ancestral land and the individual land titles will affect our right to have the communal titles,” said Ngeth Vandy, a 35-year-old Bunong man who also attended yesterday’s event.

Previous articleToxic Water or Wine to Blame For Poisonings
Next articleUN Envoy Calls for Judicial Reform, Lauds Other Progress