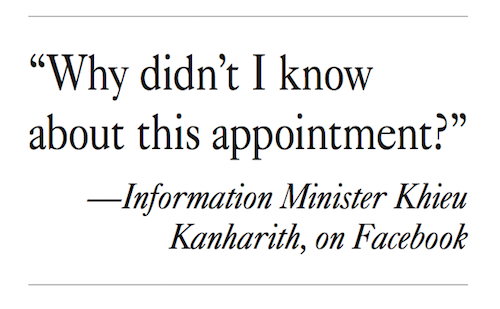 King Norodom Sihamoni issued a royal decree on Saturday replacing the head of the state-run Television of Kampuchea (TVK), apparently to the surprise of the information minister and a ministry spokesman.

The decree replaces former longtime director Kem Gunawadh, who helped set up the station in 1983, with Khim Vuthy, who previously served as TVK’s deputy director.

Ouk Kimseng, spokesman for the Information Ministry, said on Monday that the appointment was not currently “official.”

“I saw the decree, but the appointment is not official yet….The official appointment will be announced after [Information] Minister Khieu Kanharith returns from Singapore,” Mr. Kimseng said, adding that he did not know when the minister would return.

Reached on Monday, Mr. Kanharith declined to comment. However, he held a public conversation with himself on his Facebook page about the topic. “Why didn’t I know about this appointment?” he asked. “Where did this appointment come from?”

He replied in a comment, “Because no one came to ask me for my opinion or suggestion for the appointment.”

Political analyst Cham Bunthet said it was strange that Mr. Kanharith appeared to be out of the loop.

“The minister of information is the one who should know that,” said Mr. Bunthet, who also advises the Grassroots Democracy Party. “It surprised me…. If it is not from the minister, it should be from the prime minister.”

He added that the announcement was “weird” and “not the way the government would function.”

Mr. Kimseng, the ministry spokesman, said that the announcement coincided with Mr. Gunawadh reaching retirement age, though he said the former director would keep his job as the station’s government delegate and maintain his responsibility for political affairs.

Contacted on Monday, Mr. Gunawadh said he had seen the royal decree, but declined to comment further. His replacement, Mr. Vuthy, declined to say who was responsible for his promotion.

“I cannot say because this is my secret issue,” Mr. Vuthy said, asking a reporter to “give me a pardon” before hanging up his telephone.

Mr. Gunawadh helped set up the state-run TV station in 1983, though his tenure was not free from controversy.

TVK and other government-aligned stations declined to cover clashes between CNRP supporters and police in Phnom Penh following the contested 2013 election, choosing instead to broadcast soap operas and boxing matches—a decision Mr. Gunawadh defended at the time.

The former director most recently made headlines in 2014 when he resigned after failing to broadcast the Royal Plowing Ceremony that year. His resignation was rejected by Information Ministry officials and he was reinstated to the top job 11 days later.