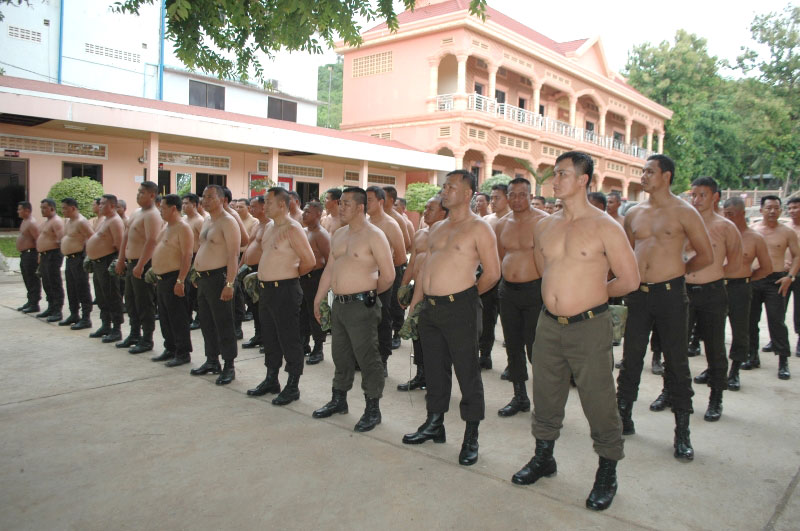 More than 100 military police from a unit in Banteay Meanchey province were ordered to strip off their shirts on Tuesday, and take a walk of shame—in front of assembled media—to highlight the obesity problem facing the country’s armed forces.

In films, soldiers are typically portrayed as muscular defenders of the nation. But stripped of their military fatigues it was evident why some members of the armed forces are being told to go on a strict diet and exercise regime to battle ballooning bellies that are threatening the image and effectiveness of the military.

“Our officers cannot be allowed to have fat bellies because it af­fects the beauty of the armed forces and leaves them facing health problems such as diabetes that means they will also lose the capability to work in the future,” said Roath Sreng, Banteay Meanchey provincial military police chief.

The military police officers in Banteay Meanchey, and others around the country, will now be given six months to cut out their R&R—beer has also been banned—and shape up.

If they fail to lose the excess weight, they will be shipped off to a boot camp where a personal trainer will whip them into shape, Mr. Sreng said.

Given the growing problem of obese servicemen, national military police spokesman Kheng Tito said the authorities had deemed it necessary to take these special, and very public, measures to improve fitness levels and general health.

“Generally, overweight people face diseases like diabetes and they can’t move as fast as normal people, so we take this measure for the first time so that our armed forces can be good role models for the people,” Mr. Tito said of the  weight problem in the military.

Deputy provincial military police chief Sun Sambath said that in an effort to expedite their weight loss, 114 heavy raincoats had been distributed to his unit for each of the singled out soldiers to wear during training.

“Wearing a raincoat during exercise will help them reduce weight because they will get very hot,” Mr. Sambath said, adding that overweight officers—who spend more time sitting on chairs indoors than they do on operations outside—were even finding it difficult to walk, while some had actually fainted during moderate exercises.

According to Mr. Sambath, the first warning signs that the military needed to take action against expanding waistlines was in 2007, when soldiers collapsed and fainted while hiking to assist in the rescue operation that followed the PMT Air crash in Kampot prov­ince that killed all 22 passengers.

The military is not the only de­partment of the government in need of a trim—many of Phnom Penh’s traffic police officers cut portly figures on the streets, a job that requires little in the way of exercise, bar the collecting of cash fines.

“My belly became bigger and bigger when I started drinking beer every night with my friends after work,” admitted 50-year-old Um Vannarin while patrolling the corner of Norodom Boulevard and Street 240 on Thursday.