Man Escapes After Being Arrested for Raping Minor

A man who allegedly dragged a 15-year-old girl off her bicycle and raped her in a forest on Friday escaped from the Kampot Provincial Court on Sunday after being provisionally charged, police and court officials said.

In a separate case, another man confessed to raping and attempting to kill a 9-year-old girl in Kompong Chhnang province on Friday while she was home alone, according to police. 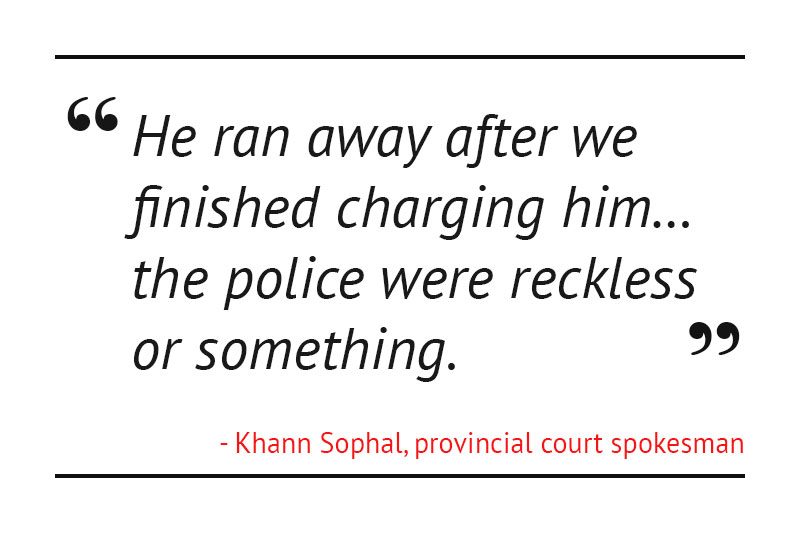 The fugitive, 27-year-old construction worker Sith Saren, was riding his motorbike in Kampot’s Toek Chhou district at about 8 a.m. when he spotted the teenager riding in the opposite direction, blocked her path and attacked her, said deputy district police chief Nop Channpheap.

Mr. Channpheap said the victim immediately told her father after the attack, but that he did not report the rape to authorities until the next morning, as he wanted to search the area and track down the suspect himself.

“She told him what he looked like and the father started looking for the suspect,” he said, explaining that the girl told her father the man wore a construction helmet, drove a Korean-made motorbike and had a dark complexion.

“When he was sure it was the one, he came to report to us the next day,” he said.

Armed with the father’s description and location of the suspect, Mr. Channpheap said police found the man in Kandorl commune at about 11 a.m. on Saturday and brought him in for questioning at the commune police station, where he confessed.

According to provincial court spokesman Khann Sophal, Mr. Saren, who is married with a son, was sent to the court on Sunday morning and was provisionally charged with rape with aggravated circumstances.

But the suspect escaped when he was brought back to the court for questioning by the investigating judge at about 2 p.m., Mr. Sophal said.

“He ran away after we finished charging him…the police were reckless or something,” he said, adding that police were currently searching for him.

“He hadn’t arrived [in the courtroom] yet—he had only arrived inside the compound, and the police were busy going somewhere, so he ran away,” Mr. Sophal said, adding that the suspect was still in handcuffs when he fled.

Mr. Saren remained at large as of 8 p.m. Sunday night, he said.

Separately, the man in Kompong Chhnang allegedly raped his 9-year-old neighbor at about 12:30 p.m. after luring her into a forest about 50 meters behind her house in Samakki Meanchey district’s Peam commune under the pretense of finding her father, a drinking buddy of the suspect.

According to commune police chief Sao Van, the suspect, Kom Doung, a 26-year-old married man with three children, left the girl unconscious after the violent assault.

“The girl said he hit her and the suspect also said that he hit her in the face,” Mr. Van said, adding that the suspect admitted to trying to strangle the girl to death during the rape, and thought he had succeeded when he left the scene.

The police chief said the victim, having fallen unconscious, came to about 20 minutes later and wandered toward her house, before being found by a neighbor when she stopped to rest.

“She was tired and leaned on a wooden fence, and then the neighbor spotted her and took her into the house,” he said. “Blood was seen on her legs, so they decided to check her and found that she had been raped.”

After her mother and local authorities were informed, the victim confirmed the assault and identified the suspect, who was arrested at about 2:30 that afternoon, said Mr. Van.