Malaysia’s Immigration Department said this week that allegations of severe physical abuse of women at a government-run detention center were false, while the country’s human rights body will launch its own investigation into the claims, according to Malaysian media reports.

The allegations came from two Cambodian women who say they were repeatedly hit and kicked by guards at Malaysia’s Juru detention center and saw fellow inmates, including other Cambodians, die there—possibly from their injuries. The Cambodia Daily spoke with one of the women last month. Labor rights group Central, which flew both women home in mid-June, said it spoke with the second woman as well, and that she corroborated the account of the first. 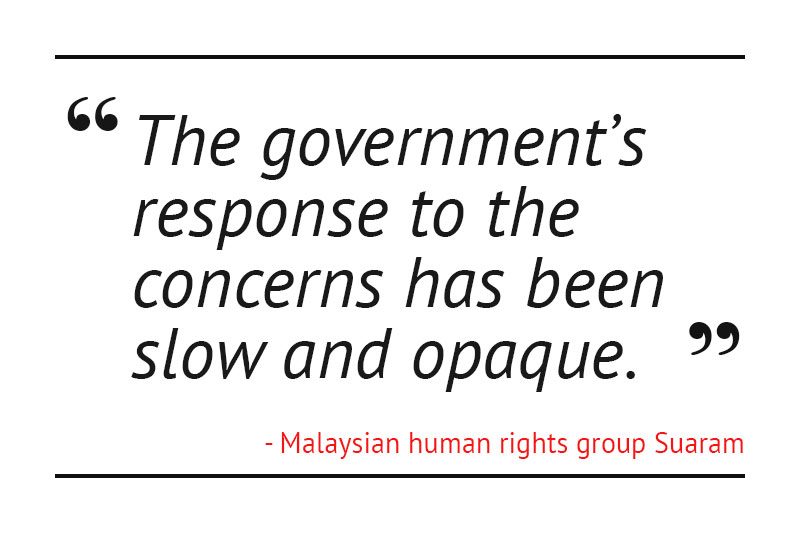 “We conducted an investigation and found the allegation to be untrue,” he was quoted as saying, adding that a detailed statement would follow soon.

The Human Rights Commission of Malaysia (Suhakam), however, said it would conduct its own investigation into the alleged abuse and deaths, Malaysia’s Sun Daily reported on Thursday.

“It is the duty of Suhakam to do it. We are already in the process of asking the authorities about the issue,” commission chairman Tan Sri Razali Ismail was quoted as saying.

News agency Malaysiakini reported on Wednesday that Malaysian human rights group Suaram has said that 14 people detained at Juru had been tortured or ill-treated.

Suaram issued a statement on Thursday calling on relevant enforcement agencies to investigate the allegations and to bring any perpetrators to justice.

“The conditions in these camps has deteriorate [sic] to conditions that can only be described as distressing at best. Despite the repeated calls by civil societies for proactive actions to be taken to remedy the situation, the government’s response to the concerns has been slow and opaque,” it said.

Cambodia’s response to the latest allegations of the abuse of its nationals in Malaysia also has been slow and opaque.

Central, the labor group, says it informed the Cambodian Embassy in Kuala Lumpur about the two women’s claims in June and was told by embassy staff that they lacked the resources to investigate. The Foreign Affairs Ministry announced a probe of the claims only after being asked for comment by the Daily last week.

On Tuesday, the ministry issued another statement saying that embassy staff visited Juru recently and that the detention center denied the allegations. The statement said that a Cambodian woman being held at the center, Saing Phlat, died of an unspecified “illness” at a nearby hospital on June 23.

According to Suhakam, two Burmese detainees at Juru died in 2009 of leptospirosis, a disease caused by exposure to water contaminated by animal urine.

Foreign Ministry spokesman Chum Sounry did not reply to requests for comment about the case and has not answered reporters’ calls in over a week. The Cambodian Embassy in Malaysia and its first secretary, Bunthel Thuok, have neither answered their telephones nor replied to emails.