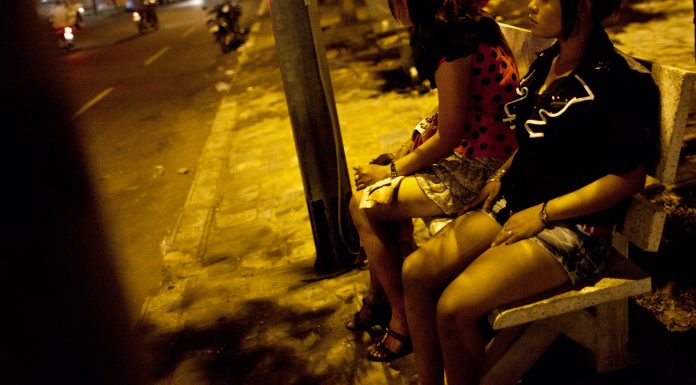 Making It Through the Night

A strong kick in the midsection sent the petite girl flying backwards as she held on tight to the knife that was meant to protect her.

She lifted herself off the ground and yelled at the man who had groped her without paying as she brandished the short blade in self-defense.

Her colleague, 35-year-old Sokna, who only gave her first name, watched from a stone bench four meters away on Street 106 and tried to assess the danger.

Fortunately, this time the customer left after shouting a few unkind curses in the girl’s direction.

“No one protects you here,” Ms. Sokna said on a recent night at work, wearing neither makeup nor jewelry.

Seventeen years as a sex worker have taught this full-figured woman dressed in red pajamas a lot about the different types of customers she might encounter. It has also taught her when it might be necessary to pull out a weapon in self-defense, and when best to keep quiet while being gang raped.

“The last time it happened, a man came to pick me up in a car. He drove me near a bridge, where six other men were waiting in a field. They had knifes, and they cut me while they raped me,” she said, showing a long slash on her calf, which was still healing.

“There’s nothing I could do, they threatened to kill me if I screamed.”

According to Ms. Sokna, the roughly 200 women working in and around the Wat Phnom area in Phnom Penh often experience beatings, intimidations, abuse and gang rape.

The men who tend to pick up the women for an hour in a guesthouse don’t have enough money to spend inside brothels or massage parlors where the girls are, to an extent, protected by the owners and services cost at least four times as much as on the street.

The men who come here, Ms. Sokna said, are often drunk or on drugs, and many of them are violent.

Ms. Sokna is fully aware of the potential dangers of the streets, and has come to accept them. She has been dragged into forests and threatened with guns, situations that she says have made her think she would never see her children again.

But more importantly, she has learned to stick to certain rules to protect herself from getting into a danger—at least if money isn’t tight.

For example, going to a guesthouse you are familiar with, where the owners are your friends and will come running if you scream for help, and taking a separate ride from your client are guidelines that make your life as a streetwalker much safer, Ms. Sokna said.

But when ends don’t meet, she accepts to work under conditions and rules set up by customers.

“If I already made enough money to pay for food and for the $2 rent for the next day, then I tell them that I will only go to the guesthouse I know. Then, I can choose. But sometimes I am so desperate for a customer that I have to take the risk,” she said.

On average, sex workers earn about $10 for an hour and can have as many as four clients per night.

She shrieks briefly as police drive up, but they don’t stop.

“Perhaps it’s too early,” she said, adding that coming to work early brought another advantage.

“Later at night, if I ask for extra money to pay for my own ride to the guesthouse, the men will just walk over to the next girl,” she said.

At another spot for streetwalkers in Phnom Penh, close to Olympic Stadium, two sisters in short pants and flip flops are talking to three young men on a motorbike.

The men ask Chia Sreymum, 24, to turn around and show off her body. Her sister, Chia Sreyni, gives her instructions, and tells her to smile.

Although Sreyni is two years younger, it is she who introduced her sister to the street.

Ms. Sreymum’s husband passed away a few months ago, leaving her with a 6-year-old son and a 4-year-old daughter, while Ms. Sreyni’s husband is in Prey Sar prison. All their relatives have passed away, they said, except for their grandmother, who tucks in their children when they are at work.

They have never learned a trade and are both illiterate, leaving them limited options for work.

Walking the streets, Ms. Sreymum said, held the best prospects of making enough money to send her children to school.

“When my husband died, I spoke to my grandmother about the future, and how I could take up this work to earn enough for us to live on. After some discussion, we agreed that there was no other way for me to make money, so she let me go,” Ms. Sreymum said.

One of the worst things about her job, besides abusive customers, are the frequent beatings by police. Prostitution is illegal, and police officers come every night to chase them down the street.

“That’s why I don’t wear heels anymore. With flip flops, I can run faster and escape,” she said.

And her feisty sister looks out for the two of them.

Ms. Sreyni handles the business and tells the young men on their motorbikes that an hour costs $20, that they can choose one of the two guesthouses the women have trust in, and that their own designated Tuk Tuk driver, whom they hire every night, will take them there separately. There’s no haggling, and the rules aren’t up for discussion.

It’s basic and simple and not hard to stick to, Ms. Sreyni said: Wear comfortable shoes. Go to guesthouses you know. Always tell your friends where you are going. Get your own ride. And if you have to scream for help—do it as loud as you can.

These rules have done a great deal in protecting them, especially from gang rape, Ms. Sreyni said.

“It never happened to me, nor to my sister. We hear about it from other people, but I think it won’t happen to us” as long as we can afford to stick to the rules, she said.