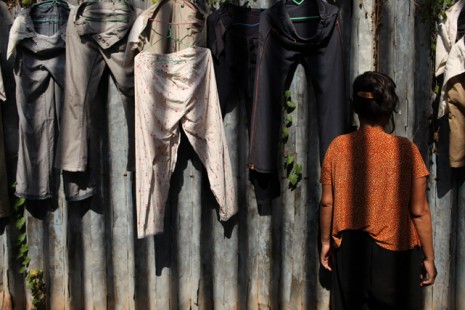 It’s not a crime to show your face in Cambodia, but at times it can get you into trouble.

Earlier this week, two monks were detained by police after holding a blessing ceremony for striking factory workers. They were released within a couple of hours, with no explanation of why they were detained or what they had done wrong.

By all accounts, the monks had simply shown up.

This lesson in staying out of things—keeping oneself invisible or at least unseen—is one that has permeated Cambodian society, and is reflected in “Behind,” the first solo exhibit of recent art school graduate Neak Sophal, which is now showing at Phnom Penh’s Java Cafe & Gallery.

Entirely shot from the back, some of the faceless photos are of Phnom Penh’s poor and destitute, who Ms. Neak says are scared of being seen by authorities because they are living on the streets illegally.

But her subjects represent a large enough swath of the population—a car salesman, a young woman hiding in her house, an older woman hanging out laundry—that the only obvious link is their reticence to be seen.

Ms. Neak did not set out to photograph people from behind, the exhibit was born from a project she did for last year’s “Our City” festival, in which she wanted to roam the streets of Phnom Penh and take portraits of the people she saw.

“I planned to walk around the city and see what happens to the many people working and sleeping on the street,” she said.

But the first three people she walked up to refused to look into her camera. So she decided she would take photos of people looking away.

“It is a little bit political,” Ms. Sophal says. “I took these pictures and I hope that people will know what I mean.”

Meaning aside, Ms. Sophal’s photos are, collectively, a moving portrait of Phnom Penh and her people. The faceless people are recognizable, not as individuals but representatives of the nameless folks that populate the city’s streets: poor women carrying babies, fat-bellied shirtless men, housewives in pajamas.

And in the background are the walls of the city’s ubiquitous villas and splendid wats—-facades one sees daily but rarely examines.

In one photo, vines crawl across a concrete wall, seeming to bend around the frame of a small woman with a shaved head wearing a sarong. In another, a monk stands in front of the ornately designed wall of a pagoda. The young woman with a baby is photographed standing outside a villa, protected by a lacquered wood and concrete fence, that she will probably never enter.

Ms. Sophal also plays with shadows in many of the photographs, adding an extra layer of mystery to her already furtive subjects.

But the one group that remains completely absent in “Behind” are the very people whose presence is felt everywhere in the series: Phnom Penh’s rich and powerful.

“I guess I could not ask them to get out of their car and stand next to the wall for me,” Ms. Sophal says, explaining their absence. And although Ms. Sophal’s photographs seem to capture a society that is afraid to look at itself, she is optimistic that change will come with time.

“If people want to hide their faces, society will not change. If people show their faces it means they have to come together to solve problems.”

The only face that is shown in the photos is an infant who is staring at the camera as its mother is looking away. “In the future, maybe the children will change society,” she says.