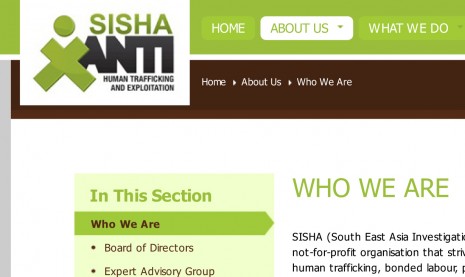 The founder of local anti-human trafficking NGO Sisha, Steve Morrish, announced on Friday he was stepping down from his position due to a raft of allegations accusing him of financial impropriety.

In a statement released on Friday, Mr. Morrish said that the allegations made against him were totally unfounded and that an independent audit of the organization was currently under way in order to clear his name.

“I want to thank the Board, our staff, and our donors for their support over the years. We have achieved a lot at SISHA and I will always be proud of that,” Mr. Morrish said in the statement.

“However a campaign of online attacks against me personally was starting to affect SISHA, and after putting six years of my life in to SISHA I could not allow that to happen.

“Standing down will also allow me to better pursue the defamatory and unfounded allegations made against me. The Board of SISHA has engaged KPMG to undertake an independent review, and I’m confident that this will put to rest allegations of financial impropriety against me.”

Sisha’s alleged financial problems were revealed publicly for the first time on August 8 in an anonymous post on the Cambodian blog Penhpal. The posting alleged that money donated to Sisha in Cambodia “has instead been siphoned off to pay for the NGO’s operating expenses.”

In response to the blog post, Mr. Morrish on Monday released a statement denying suggestions of financial impropriety.

According to a letter sent to Sisha’s board in August by a former executive director of Sisha USA, the organization’s fundraising arm, hundreds of thousands of dollars donated to specific causes—including a scholarship program for female victims of trafficking and sexual abuse financed by the Gina Rinehart Scholarship for Underprivileged Girls—have instead been spent on Sisha’s operating costs.

Other programs where funds have allegedly been misused include a crisis support center in Battambang province and another fund to help orphans, according to the letter.

The letter was sent by Sean Looney, the former executive director of Sisha USA, a charitable organization that aims to raise awareness of the problem of human trafficking, sexual exploitation and bonded labor in Southeast Asia. In his letter, Mr. Looney alleges that “Mr. Morrish is effectively running something akin to a not for profit Ponzi scheme.”

He added that “financial mismanagement” at Sisha had led to “high overhead[s], and exorbitant travel costs” for staff at the organization.

Mr. Looney wrote that Sisha’s liabilities totaled more than $800,000 at the end of June, including $450,000 for the crisis recovery center in Battambang province that has not been built, $150,000 donated by the Gina Rinehart Scholarship for Underprivileged Girls and the Camkids orphanage fund, a U.K.-based charity that helps orphans and underprivileged children in Cambo­dia. However, he alleged that all the money donated for those causes had been spent and that Sisha would not be able to fulfill its obligations without another massive injection of donor funds.

The scholarship for underprivileged girls awards recipients full fi­nancial support for their university degrees, covering all tuition and costs related to their studies. There are currently five girls who have received scholarships in varying stages of their university education, with four more to begin in October, according to a former Sisha staff member.

The relationship between Sisha and Camkids remains unclear and Camkids did not respond to several requests for comment sent this week.

Responding to the allegations made against Mr. Morrish, Sisha’s board chairman, Stephen Higgins, on Friday denied all claims of misconduct and expressed confidence that Sisha would continue its work to support victims of human trafficking and sexual assault.

Sisha still has “in the hundreds of thousands (plural not singular) in earmarked cash balances.”

“The board has received assurances regarding the appropriateness of spending being in line with donor wishes, and has requested an independent review to confirm this,” he said.

“The Board is confident that with the ongoing support of donors that SISHA will continue to support victims of human trafficking and sexual assault in Cambodia, along with fulfilling its scholarship and orphanage programs,” he added.

In a separate press release also issued on Friday, Sisha said that Ron Dunne, Sisha’s Thailand country director, had been appointed as interim CEO of the organization.

Before coming to Cambodia and founding Sisha in 2007, Mr. Morrish was a detective senior constable after eight years with the Victoria State Police in Australia.

On top of Mr. Morrish’s resignation, Australian mining magnate Gina Rinehart, who is an “expert adviser” to Sisha’s board, has also sought to distance herself from the organization.

A spokesperson for Ms. Rinehart’s Hancock Prospecting Pty. Ltd. said in an email on Friday that Ms. Rinehart had only recently been made aware of the allegations of fi­nancial mismanagement.

“As a consequence, a reputable firm of auditors is being engaged to perform an independent audit of the finances of these programs,” the spokesperson said.

“Pending the outcome of this work, Mrs. Rinehart tended her resignation as an honorary member of the advisory board of SISHA. The advisory board is not responsible for the running of SISHA or its daily management.”

According to the latest Forbes billionaires list, Ms. Rinehart is the world’s 36th richest person, with an estimated fortune of $17 billion.

The spokesperson said Ms. Rinehart did not wish to comment on whether she was satisfied with the way her donations had been spent.

However, she said she was “very pleased” to support the scholarship program for girls and intended to continue the program “one way or another.”

This article has been changed to reflect the following correction: The weekend article “Local Trafficking NGO De­­nies Financial Misconduct” (page 1) should have said the letter from Sean Looney, form­er Sisha USA executive director, was sent to the board earlier this month, not May. The article should also not have stated that Stephen Higgins, Sisha’s board chairman, denied the allegations of financial misconduct made against Sisha’s founder Steve Morrish while an investigation is ongoing.