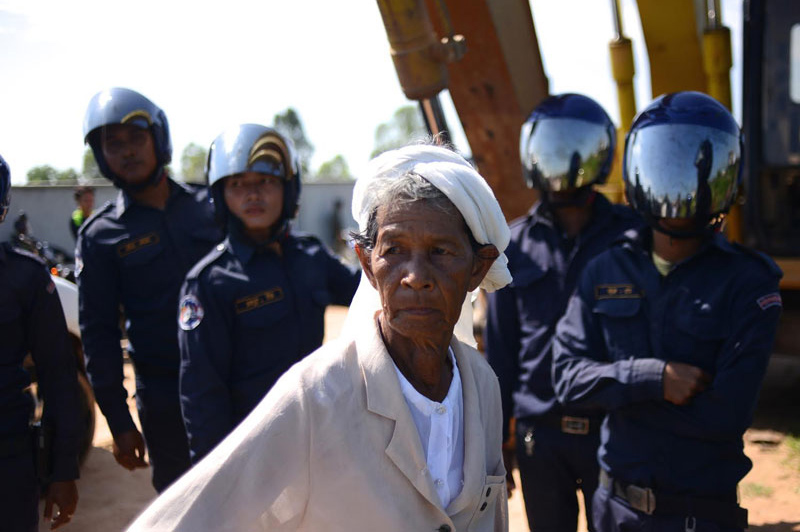 When Huot Sarom was forced to watch last month as authorities seized rice paddies she has been farming since 1979, it would have been easy to assume her 15-year battle to retain the land on the outskirts of Phnom Penh was finally at an end.

Of the 5.67 hectares of farmland in Pur Senchey district that Ms. Sarom, 68, claimed as hers—and had fought doggedly to keep in the face of opposition from villagers who sold parcels of the land to a cousin of the prime minister—she now has just one hectare of paddy left to her name.

The remaining hectare has been ringed in by thick concrete fences that have shot up virtually overnight, apparently built by a private construction firm, while dozens of plainclothes guards and military police have set up camp in the fields Ms. Sarom lost.

But for Ms. Sarom, the fight for the land in Kakab commune is far from over.

Despite her age, a life of farming and raising two sons alone—she became a widow when her husband was killed in the Khmer Rouge era—capitulating, she said, is not an option.

“I would sacrifice my life because it’s my property and I have owned it since a long time ago,” she said during an interview earlier this month. “When no one cared about it, I just farmed it by myself; I cleared the land and the bushes until it became fertile land and I could grow rice.”

And Ms. Sarom has no qualms about standing up to the rich and powerful to protect what she believes is rightfully hers.

Her battle, which in many ways exemplifies modern land struggles across Cambodia, stretches back to 1989, when the socialist government slowly began to reintroduce property rights.

In December 1989, Dangkao district agriculture officials gave Ms. Sarom a land title based on the illiterate farmer’s verbal estimate of the size of her plot—one hectare. They apparently did not measure the land themselves, and the document entitled her, therefore, to just one hectare out of what was, in reality, nearly six.

Ten years later, as overseas investors began pouring funds into Cambodia and the value of land   in Phnom Penh began rising, a group of 102 villagers lodged a complaint with the Interior Ministry alleging that village chief Sar Phal had illegally grabbed three hectares of community land.

The ministry subsequently issued a notice in March 2000 declaring that the contested land in fact belonged to Ms. Sarom— and that an unknown third party was behind the villagers’ attempt to claim ownership.

“This land was originally rugged land consisting of small hills, small ponds and an area of red gravel. That’s why no one wanted to use this land for farming, only grandmother Huot Sarom,” then-Dangkao district Governor Kruoch Phan wrote in a February 2001 report clarifying the case to then-Phnom Penh Governor Chea Sophara.

For a few years, Kakab commune was quiet. Then, in May 2005, village representative Em Chorn lodged a complaint with the Phnom Penh Municipal Court on behalf of 141 families, accus- ing Ms. Sarom of forging a public document to steal their land.

Ms. Sarom then lodged a counter-complaint against Mr. Chorn and a group of other villagers—accusing them of destroying posts she was using to delineate her property and of attacking her and the workers she hired to help put the posts in the ground—and in 2006, several men were charged with property theft and intentional violence. The charges were later dropped.

During a court appearance on March 14 that year, Mr. Chorn admitted the villagers did not possess a legal document proving their claim to the land.

“About 12 families had farmed on part of that land between 1979 and 1985, but they haven’t farmed on it since then, while Huot Sarom has kept farming on the land until the present,” he said at the time.

Then, in May 2007, what had seemed to be a neighborhood land dispute reached the highest lev-   els of government when the feud came to the attention of Men Sam An, then-Minister of National Assembly-Senate Relations and Inspection, who ordered five civil servants to investigate the situation.

On their recommendation, Ms. Sam An wrote to Prime Minister Hun Sen in February 2008 requesting that 5.67 hectares of the land be split among the villagers, and one hectare be granted to Ms. Sarom. The prime minister agreed and an official government notice was issued on March 18 endorsing the proposal.

But the following day, it emerged that Mr. Hun Sen’s cousin, businesswoman Dy Proem, had bribed the lead investigator, Seng Yean, by promising him $200,000 to in- fluence the case in favor of the villagers, who had already promised to sell her the land.

In June 2009, Som Kimsour, who succeeded Ms. Sam An, compiled a damning report on the corruption allegations and by August, Ms. Proem and Mr. Yean were facing criminal charges.

Court proceedings were delayed repeatedly, and in a speech in December 2010, the prime minister publicly entered the fray. He said that Ms. Proem should be held accountable for any wrongdoing and face the maximum sentence if convicted.

In November 2011, Ms. Proem was convicted of corruption and sentenced to two-and-a-half years in prison for paying $30,000 to Mr. Yean, who received a four-and-a-half year sentence for accepting the bribe. He was also fired from his position as deputy director-general of inspections at the National Assembly-Senate Relations and Inspection Ministry.

However, no arrest warrant     was ever issued and the pair never served time behind bars. Their appeals, lodged in December 2011, still have not been heard, despite Ms. Sarom’s lawyer, Kao Ty, repeatedly calling on the Phnom Penh Municipal Court to consider them.

Last year, Ms. Proem was granted the title of oknha, an honorific reserved for tycoons with close connections to the ruling CPP, who ostensibly help fund public projects.

The dispute again came to a head in September this year when, despite Ms. Sarom applying to   the court for an injunction to protect her land and the reams of evidence in her favor, Pur Senchey district Governor Hem Darith formed a committee to enforce the government’s 2008 notice to award most of the land to the villagers.

On September 10, police and security guards attempted to help the villagers demarcate the property, while deputy municipal court prosecutor Sieng Sok looked on.

An ever-determined Ms. Sarom yanked wooden demarcation posts from the ground and faced down the authorities with a sickle, threatening to “peel out the eyes” of anyone who dared steal her land.

But just over a week later, most of it was gone—the elderly woman and her small family could not contend with an excavator brought in to hammer the demarcation posts into the ground on September 18.

Despite the apparent finality   of the move, Ms. Sarom has instructed her lawyer to fire off a series of letters to everyone from the justice minister to opposition lawmakers, asking them to intervene on her behalf.

And she now devotes her days to a one-woman protest against the construction workers—it is unclear who has employed them, as it is believed Ms. Proem has sold the land—and the military police guarding the site.

“I fight with them all the time, until I feel exhausted and tired, and the military police grab me to make me stop,” she said, displaying what she said were bruises and scratches on her wrists from being thrown into a hedge.

“I will not retreat, because this is my land.”