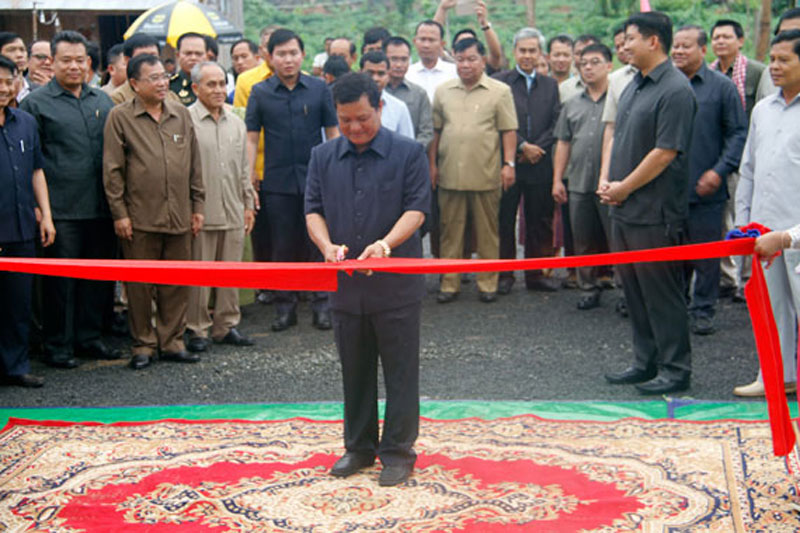 CNRP lawmaker Un Sam An sent a letter to Prime Minister Hun Sen on Monday asking for an investigation of Try Pheap’s Special Economic Zone (SEZ) in Ratanakkiri province, saying that the timber magnate is misusing the site to export illegally logged trees to Vietnam.

The letter follows a similar one that he and 10 other opposition lawmakers sent to Mr. Hun Sen two weeks ago asking him to put a stop to illegal logging in the province’s Virachey National Park, which they blamed on Mr. Pheap and fellow business mogul An Mady.

Both letters stem from a trip the lawmakers took to Ratanakkiri in June to investigate reports that Vietnamese farmers were encroaching on Cambodian territory. They passed by Mr. Pheap’s properties in the area along the way.

“They [Mr. Pheap’s company] are using the SEZ as cover to export logs to Vietnam, because we did not see any factories inside the SEZ,” Mr. Sam An said Wednesday. “I ask for the revocation of his license if the government finds irregularities at Try Pheap’s SEZ.”

He said that the only thing the lawmakers saw at the SEZ were rows of shipping containers, of the sort Mr. Pheap uses to export his timber. SEZs can be used for export processing, but Mr. Sam An wants the probe he is requesting to include a look into whether the timber passing through the site is being sourced legally.

“We want the government to inspect the legality of the wood being exported, too,” he said.

Mr. Sam An’s letter was signed by National Assembly President Heng Samrin on Tuesday, clearing its way to the prime minister. Mr. Hun Sen’s cabinet chief could not be reached for comment.

Mr. Sam An said the CNRP’s first letter to the prime minister, about Virachey, had yet to receive a reply.

The lawmakers’ allegations are not new and have been swirling around Mr. Pheap for years.

During a trip to Virachey in late 2013, Cambodia Daily reporters met loggers illegally harvesting protected tree species from the park who said they were working for Mr. Pheap.

In February, environmental rights group Global Witness released the results of a months-long undercover investigation that placed Mr. Pheap at the center of a nationwide illegal logging racket operating with the help of government officials.

Global Witness said its investigators tracked protected tree species being illegally logged in Virachey to Mr. Pheap’s SEZ, where the wood was loaded into shipping containers and driven to Vietnam. Photos of the SEZ accompanying the report showed containers full of unprocessed rosewood, which cannot be legally harvested or exported.

Representatives of Mr. Pheap’s business operations in Ratanakkiri could not be reached for comment Wednesday. Following the lawmakers’ first letter, however, the company issued a statement denying any involvement in illegal logging.