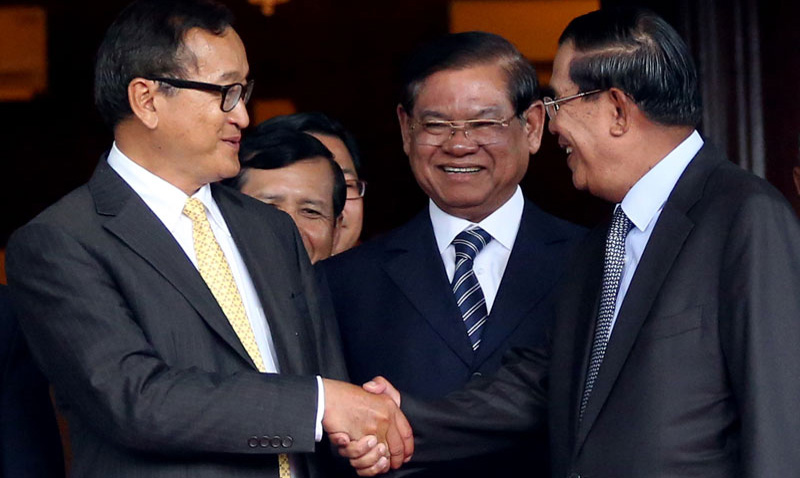 Lack of Detail in Deal Comes Back to Bite CNRP

When one of its senior officials was seized and jailed on Tuesday on “insurrection” charges four months old, the opposition CNRP took little time interpreting the event as a warning to back down in the recently deadlocked election-reform talks.

The imprisonment of Meach Sovannara, an outspoken former journalist who now heads the opposition’s information department, had come the morning after senior officials from the ruling CPP and CNRP had once again failed to bridge a divide over how to implement their July 22 political deal.

“The CPP is using the tactic of arresting CNRP officials to put pressure on the CNRP, as our party disagrees with some points on the issue of the NEC,” CNRP deputy public affairs director Kem Monovithya said Thursday, referring to remaining disputes over the reform of the National Election Committee.

“They are using the courts to arrest CNRP activists, and they are doing this to pressure us to follow what they want.”

Under the July 22 deal, which came a week after seven CNRP lawmakers were imprisoned on charges similar to Mr. Sovannara’s, the CNRP ended its boycott of its 55 National Assembly seats in exchange for an overhaul of the election commission it accuses of rigging the 2013 election.

Prime Minister Hun Sen and CNRP President Sam Rainsy announced they would establish a new NEC composed of four officials from each party and a ninth neutral member. Within days they chose Pung Chhiv Kek, president of rights group Licadho, to take the position.

On a high, the opposition’s 55 lawmakers then took their seats in parliament in late August, and with the results of the July 2013 election legitimized, the two parties began meeting to hammer out the details of the draft law to create the new NEC.

However, the CNRP soon discovered a CPP delegation less eager to make concessions, and instead insisting on new conditions.

Since early October, the two parties have been stuck on a number of issues including the CPP’s demands that the nine NEC members not be allowed to hold dual citizenship and that the secretary-general has at least five years experience.

According to political analyst Lao Mong Hay, the conditions placed on the July 22 deal have given the CPP the confidence that the CNRP, desperate for any reform of the current CPP-controlled election body, will eventually fold to its demands.

“Based on the original agreement and the majority that the CPP secured in parliament, the CPP was bound to have the upper hand, because the agreement says that if the new NEC cannot be formed, the old NEC continues to function,” Mr. Mong Hay said.

Mr. Rainsy acknowledged last week that the CPP’s stubbornness in the talks is a concern for the CNRP, as a prohibition on dual nationals being appointed to the NEC would likely prevent Ms. Chhiv Kek, also a citizen of France and Canada, from accepting her place on the reformed election body.

In such a situation, the CNRP would then be forced into further negotiations with the ruling party to select a new candidate for the final, tie-breaking position on the reformed NEC.

Mr. Rainsy says that he has been unable to convince Mr. Hun Sen against the ban on dual nationals, with the pair having met privately in parliament on November 3. “He said it was a matter of pride,” Mr. Rainsy said the following day.

“There is a law in Burma that prevents Aung San Suu Kyi from standing for president, so he said that this [restriction on NEC members] is not exceptional,” Mr. Rainsy explained.

Interior Ministry Secretary of State Prum Sokha, a CPP member of the election-reform talks, declined to comment when asked if a ban on dual nationals violated the spirit of the July 22 deal, due to its likely impact on Ms. Chhiv Kek’s candidacy.

“I’d rather not say because we are waiting on the top leaders for this, and we can’t say it’s ‘no go’ or ‘go’ with this one,” Mr. Sokha said by telephone Thursday. “Wait until after the working group meeting next week, it should wrap up then.”

The snags that have emerged in recent reform talks are an indication of the bargaining power the CNRP gave up when it joined the National Assembly, according to John Ciorciari, an expert on Cambodia from the University of Michigan’s Gerald R. Ford School of Public Policy.

“Vagueness in any agreement tends to favor the stronger side,” he said. “The CNRP had limited leverage even before ending its boycott, and afterward it was foreseeable that the CPP would exploit any vagueness in the July deal to its advantage.”

Mr. Ciorciari explained that if the CPP decided not to soften in its negotiations with the CNRP, there was not much the opposition party could do about it.

“The CNRP’s options are not too appealing. Fomenting pro- tests would provoke further crackdowns, and appeals for international support have met with relatively tepid responses since the 2013 elections,” Mr. Ciorciari said.

Yet for the CNRP, the extent to which the CPP has sought to push the boundaries of the July 22 agreement has bordered on the extreme.

In an October 31 interview with Radio France International, Mr. Sokha—the CPP secretary of state—stated that the ruling party would retain the chairmanship of the NEC no matter what shape the final reforms take.

Asked if the CPP had only conceded to the creation of a bipartisan NEC on the condition that it would still chair the institution, Mr. Sokha commended his interviewer.

“Of course, that’s well noticed,” Mr. Sokha said. “Why did the CPP at that time accept the 4+4+1 formula? Because it was important that we wanted to have a political resolution. Although it is not in the written agreement, in the top-level negotiations I know that the CPP at the time already raised the matter—the president of the NEC   will come from the CPP and the deputy president from the CNRP,” Mr. Sokha said.

It was a jarring claim for many in the opposition, who in July had promoted the idea that Ms. Chhiv Kek—as the NEC’s neutral member—would be the natural leader of an election body that will otherwise be evenly divided along party lines.

CNRP lawmaker Eng Chhay Eang said by telephone Wednesday that during talks leading up to the July 22 deal, the CNRP had concluded that the issue of who would chair the NEC would be left to the NEC itself.

“The fact is that Hun Sen at that time briefly mentioned that the presidency of the NEC shall be given to the CPP, and then His Excellency Kem Sokha, deputy president of the CNRP, responded that the position of secretary-general shall be granted to CNRP, and then this topic was not discussed at all,” he said.

“However, the CNRP’s position is that we want everything to be carried out in a democratic matter. That means the rights should be given to all members of the NEC to select the president and secretary-general,” Mr. Chhay Eang said.

Political analyst Sok Touch, who is also president of Khemerak University, said that the CNRP had been foolish in rushing to accept its assembly seats in August before working out the details in the type of meetings in which it is now discovering problems.

“They were quite premature in signing onto the July 22 agreement on the electoral and NEC reforms,” Mr. Touch said Thursday. “The July 22 deal did not clearly state in detail what kind of reforms [there will be] for the NEC…so the meaning of ‘electoral reform’ is very wide.”

Mr. Touch said that the CNRP, having given up its bargaining chips by legitimizing the election results, should not be surprised that the CPP was adding a slew of changes to the reform of the NEC.

“What we have seen is that the CPP has succeeded many times in pushing the CNRP to do what the CPP wants them to do,” he said.

“First, the CPP succeeded by using the tactic of arresting many CNRP lawmakers, forcing the opposition to take part in the     negotiations to end the political deadlock.”

“Secondly, they used the same tactic of imprisonment on other CNRP activists, forcing the CNRP’s lawmakers to take their offices at the National Assembly,” Mr. Touch said.

“Today, the negotiations on the NEC have been stalled on about 10 percent of key things, including the matter of the presidency and the single-nationality request…so the CPP has begun the same strategy that they had success with before.”

Such behavior indicated the ruling party was not going to budge in the demands it is making for the new NEC to form, said Mr. Mong Hay.

“The problem with the agreement for the CNRP is that the loose ends were to be sorted out in the ‘spirit of the agreement,’” he said.

“But you can now see that the CPP is now sticking to the letter of the agreement, not to the spirit.”