Labor Minister Ith Sam Heng said Tuesday that he has sent a letter responding to 30 international clothing brands who recently wrote to the government expressing their concerns over a draft union law which could allow for the arbitrary breakup of unions.

Speaking outside a conference in Phnom Penh on migrant workers, Mr. Sam Heng said that he wrote to the brands, which include H&M, Gap and Nike, explaining that the union law will take into account international labor conventions Cambodia has signed, as well as the state of industrial relations in the country.

In their March 14 letter, the brands said they were concerned the law may not comply with International Labor Organization (ILO) conventions that protect rights to unionize and bargain collectively.

Mr. Sam Heng said the government was working with officials from the ILO to ensure that the country’s new union law is fully compliant.

“We are now preparing to establish the union law with technical sponsorship from the ILO and our policy for this law is to do it in accordance with conventions” that Cambodia has signed, he said.

Mirroring comments he made prior to receiving the letter from the brands early this month, Mr. Sam Heng added the caveat that some flexibility may be needed in working within the ILO conventions.

“One point is that we need to do this according to the context of Cambodia and the various valid regulations,” Mr. Sam Heng explained. “The union law will provide guarantees to improve the rights and freedoms of unions as well as prevent violations of the law when they use their rights in their capacities as unions to do illegal activities.”

The Labor Minister said that his letter to the brands addressed a long-running demand that the government ensure there is a functioning minimum wage-setting mechanism in the country.

The demand was a focus of representatives of H&M and Gap in a meeting with senior government officials in Phnom Penh on February 19.

“We are now working with the ILO, and this organization already sent a project to us and we are checking on the ILO’s project, and after checking, we will continue to study on the minimum wage for workers,” he said, adding that the mechanism would be operated jointly with the ILO. 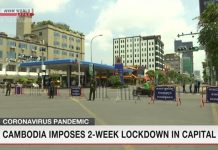 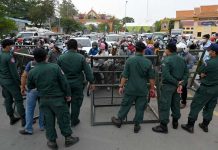 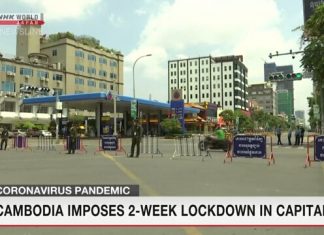 By
NHK World
-
April 17, 2021
0
Cambodia's government has imposed a two-week lockdown for the country's capital Phnom Penh amid a surge in coronavirus cases.

Cambodia’s Ruling Party Coasts to Victory in Election With No Viable...