“We call on international brands such as Adidas, Puma and Nike to take concrete measures to address wages that currently do not satisfy basic needs nor provide for a life with human dignity,” the Cambodian Legal Education Center (CLEC) said in a statement.

On Friday, 128 garment workers reportedly fainted in two separate factories. This brought to 337 the total cases reported for the week.

The faintings occurred at the Shenzhou, Daqian Textile and New Wide factories in Phnom Penh’s industrial Pur Senchey district. CLEC said that staff at these three factories sew garments for one or all of the foreign sportswear companies.

Joel Preston, a legal consultant for CLEC, said Friday that Nike, Puma and Adidas had an immediate responsibility to the workers that sew their garments.

“These companies have huge financial leverage with the Cambodian government,” Mr. Preston said, citing the $5.5 billion the garment sector injects into the country annually.

“It’s time they took some responsibility,” he said. “We don’t want—and the workers don’t need—words, codes of conduct or guidelines from the brands. We need to see tangible efforts to raise the standard of living.”

Representatives of the three brands fingered in the CLEC statement could not be reached for comment.

In the latest round of faintings on Friday, 60 workers reportedly fell ill at New Wide and 68 fell ill at Shenzhou. It was the third case in a week for each factory.

Van Sou Ieng, chairman of the Garment Manufacturers Association in Cambodia, said the fainting reports were exaggerated and that the brands had no responsibility to factory workers.

Pur Senchey deputy governor Khem Sun Soda, who confirmed Friday’s faintings, rebuked doctors’ claims that malnourishment, poor working conditions and dehydration caused or contributed to the faintings. He charged that workers were looking for an early start to the Khmer New Year holiday, which runs from April 14 to 16.

“This has been the habit of garment workers for a long time,” Mr. Sun Soda said. “It is close to the Khmer New Year so when they see one person faint they all copy them because they don’t want to work. There is no toxic fumes, no unsanitary food, nothing like that.”

“An ILO report in 2011 clearly shows the link between wages, malnourishment and mass faintings,” Mr. Preston said, in reference to the International Labor Organization.

“These workers are hanging by a thread,” he said. “They struggle to afford nutritious, sanitary food, and for this reason they are highly susceptible to toxic fumes, dehydration and all the other poor conditions that they regularly encounter, which can easily tip them over the edge.” 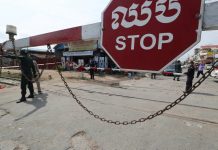 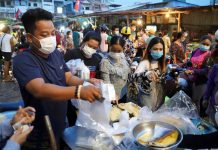 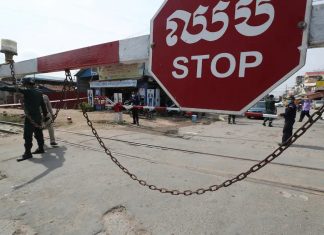 By
AP
-
April 16, 2021
0
Cambodia’s leader ordered a strict stay-at-home two-week lockdown in the capital Phnom Penh starting Thursday to slow a surge in coronavirus cases, warning “we will die unless we act responsibly.”

What’s what at Angkor Wat: It’s one of the most prized...

Cambodia at the center of a new Cold War