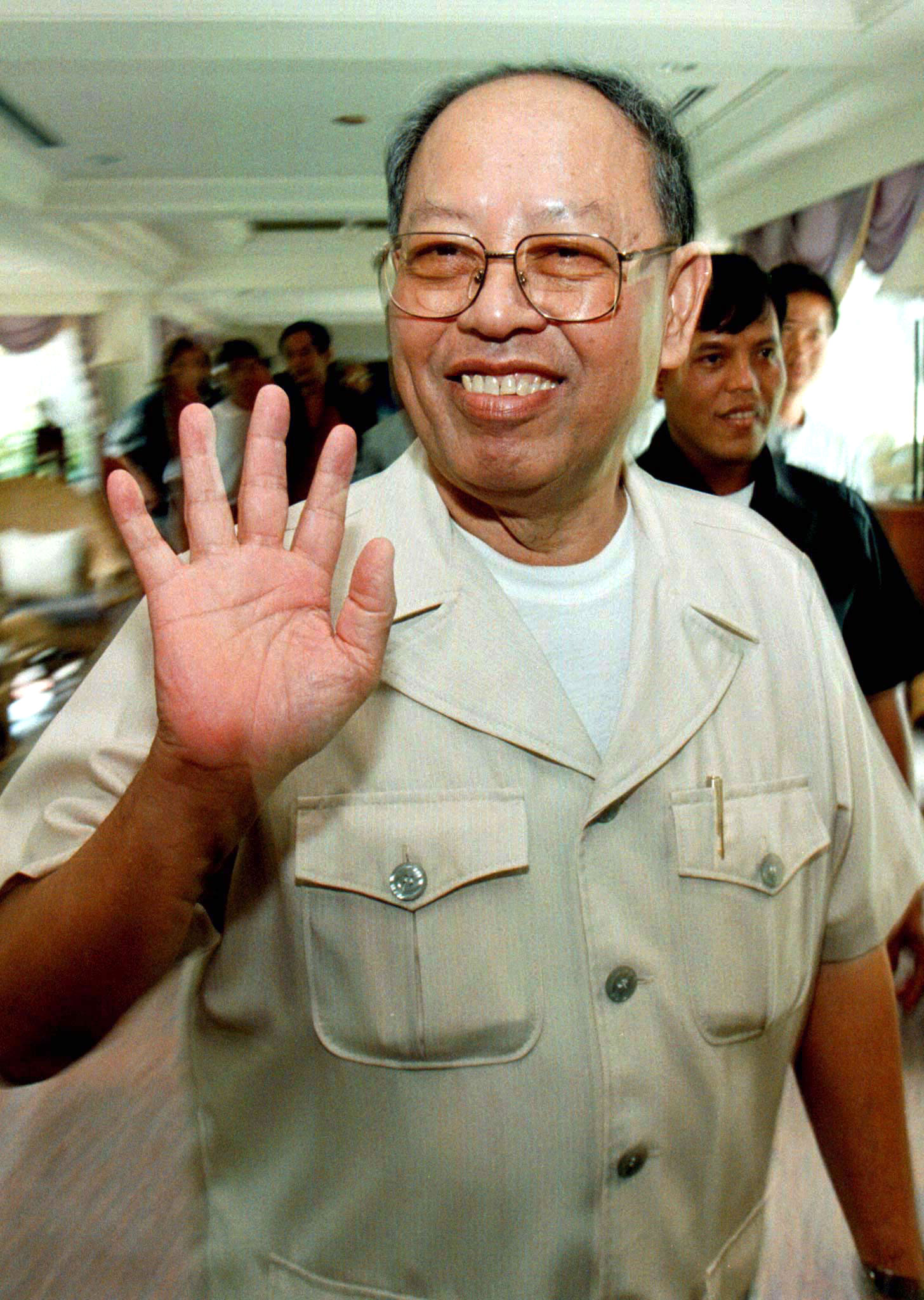 Ieng Sary, one of the original leaders of the Cambodian communist movement in the 1950s who served as foreign minister during Pol Pot’s regime and whose defection to the government would eventually lead to the demise of the rebel movement in 1998, died in Phnom Penh on Thursday.

Ieng Sary died at 8:45 a.m. at the Khmer-Soviet Friendship Hospital.

The 88-year-old was hospitalized on March 4 due to diarrhea and vomiting, stalling hearings at the Khmer Rouge war crimes tribunal, where he was accused of crimes against humanity in proceedings known as Case 002.

Ieng Sary’s remains were taken to the hospital’s mortuary where embalming chemicals were administered ahead of the road journey to Malai district—a former Khmer Rouge stronghold—in Banteay Meanchey province.

Ieng Sary’s body, which left the hospital’s rear entrance at 3 p.m. in an ambulance, will be cremated in Malai next week, said Ang Udom, who had acted as his defense lawyer at the tribunal.

An autopsy was not conducted, said Neth Pheaktra, spokesman for the Extraordinary Chambers in the Courts of Cambodia. A prosecutor from the war crimes court did, however, view the corpse to determine whether or not Ieng Sary had died of natural causes, Mr. Pheaktra said.

Pailin deputy governor Ieng Vuth, who is Ieng Sary’s son, confirmed Thursday that court officials had examined his father’s body and that his family was at his bedside at the hospital when he died Thursdsay morning.

A brother-in-law of Pol Pot, Ieng Sary had been a political activist since secondary school in the 1940s.

Born Kim Trang in 1924 in the Vietnamese province of Tra Vinh in the Mekong Delta, as an ethnic Khmer he was sent by his well-off family to live with relatives in Prey Veng province. He later changed his name to the more Khmer-sounding Ieng Sary, and altered his birth certificate to appear six years younger and to make him eligible for the entry exam at the Lycee Sisowath secondary school in Phnom Penh.

Admitted to Lycee Sisowath, he founded a student movement to campaign against French rule in Cambodia and headed the first student-led protest in the country’s history. The protest was in support of a national strike to back the nationalist Democratic Party’s call for independence from France. It was while volunteering for the Democratic Party during Cambodia’s 1947 electoral campaign that he met a technical-school student named Saloth Sar—the future Pol Pot.

The Democratic Party won the election, which the French had encouraged, believing that it would introduce democratic values to a country which had known only absolute monarchy.

When Ieng Sary applied for a scholarship to study in France two years later, he obtained it due to the support of Democratic Party officials at the Ministry of Education.

In Paris, Ieng Sary befriended a group of Cambodians who had discovered and embraced communist doctrines. He also met a former Lycee Sisowath student called Khieu Thirith—she would be social action minister during the Pol Pot regime—whom he married in 1953.

Ieng Sary had enrolled in political science at the Sciences Po university in Paris but he would not secure a diploma, spending a great deal of his time with the Cambodian left-wing student group Cercle marxiste des etudiants khmer, which he co-founded and which advocated for armed action against the French to win Cambodia’s independence.

Saloth Sar was among the Cambodian students in Paris, and he would later marry Khieu Ponnary, Khieu Thirith’s sister.

“Ieng Sary and Saloth Sar became close friends,” journalist Elizabeth Becker wrote in her book “When the War Was Over.”

“Sary was the most outgoing of the group, a young man with a bright face and easy smile then, headstrong and prone to quick decisions and great bursts of enthusiasm. Saloth Sar was quiet, more calculating.”

Returning from France in 1957, Ieng Sary became a history teacher at his former Lycee Sisowath and also taught at the private school Kambujabot, whose director had been part of his left-wing student group in Paris.

Remaining an underground communist activist, Ieng Sary was one of the rare intellectuals to sit on the committee of the Khmer People’s Revolutionary Party, renamed the Khmer Workers Party, during a clandestine meeting at the Phnom Penh railway station in September 1960. It would officially become the Communist Party of Kampuchea in 1971.

“In May 1963, Saloth Sar and Ieng Sary vanished from Phnom Penh,” historian David Chandler writes. They were about to be arrested by the government’s security forces who were keeping suspected communists under surveillance. “They soon turned up, protected by Vietnamese insurgents, in the forests in eastern Cambodia, near the village of Ampil in Kompong Cham [province],” Mr. Chandler adds.

From 1967 to 1970, Ieng Sary would be in charge of the northeastern zone where he was entrusted with placing Cambodia’s ethnic minorities under Khmer Rouge control.

When Prince Norodom Sihanouk was ousted from power by the U.S.-backed Lon Nol government in March 1970, he was offered hospitality by China, which was supporting communist forces in Vietnam and Cambodia.

Shortly after his ouster, Prince Sihanouk made a radio appeal to Cambodians, exhorting them to join the Khmer Rouge in the jungle and take up arms against the Lon Nol government.

The Prince was now an ally of the communist rebels he had once hunted while at the head of the country. Ieng Sary was charged with making sure this would not change, said historian Henri Locard in an interview on Thursday.

“In 1971, Ieng Sary was the one sent to Beijing to watch then-Prince Norodom Sihanouk and make sure that he would not negotiate [with General Lon Nol]. And this is where he played a fundamental role,” Mr. Locard said.

Numerous attempts were being made to negotiate the return to Cambodia of Prince Sihanouk by his cousin Prince Sirik Matak—who had first backed Lon Nol— and also by France and the U.S., Mr. Locard said.

But all attempts failed, due in part to Ieng Sary’s vigilance as Prince Sihanouk’s minder, he said.

“He was of course a central figure, but it was not him who wrote policies,” which was the work of Pol Pot and Nuon Chea, Mr. Locard said.

Ieng Sary often claimed that he did not develop the policies or orders for mass killings. However, he was responsible for inviting Cambodians living abroad to return to the country after the Khmer Rouge victory in 1975, Mr. Locard said.

Many overseas Cambodians were eager to come back to use their education and advanced skills to help rebuild their country after the civil war, but of the 1,700 who returned, three-quarters died, some of them at the Tuol Sleng torture center, he said.

Before 1975, and after the Khmer Rouge had been ousted from power by Vietnamese forces in January 1979, Ieng Sary also served as the moneyman for the rebel movement, Mr. Locard said.

Being “Beijing’s man,” Ieng Sary was trusted by China and the Chinese would let him manage the funds they had earmarked for the Khmer Rouge, which enabled him to set aside money for himself as well, Mr. Locard said.

In August 1996, reports emerged that a deep rift had occurred among Khmer Rouge factions and that armed confrontation was imminent between the hard-line forces of Ta Mok and Son Sen on one side and Ieng Sary’s supporters on the other.

As tensions grew, troops and civilians who had been under Khmer Rouge control started to defect to the Phnom Penh government.

On September 14, 1996, King Norodom Sihanouk granted Ieng Sary a royal amnesty at the request of the two prime ministers. It was the final part of the deal for his defection from Pol Pot.

Ieng Sary led thousands of Khmer Rouge fighters out of Pailin, a loss in terms of troops and finances that led to the eventual collapse of the Khmer Rouge, with the last forces defecting in December 1998, and Ta Mok captured in early 1999.

With amnesty in hand, Ieng Sary and Ieng Thirith, along with Pol Pot’s first wife, Khieu Ponnary, who had lost her mind in the intervening years, moved into a spacious villa in Phnom Penh, frequenting Cambodian high society without qualms, and was even spotted shopping at popular supermarkets in the city.

“He had a side that Pol Pot or Nuon Chea did not have. He was a careerist, a professional politician who wanted power and the benefits of power, that is, wealth and making his family benefit from it,” Mr. Locard said.

“He is the only high-ranking Khmer Rouge leader to have considerably enriched himself,” he added.

Despite his amnesty, on November 12, 2007, Ieng Sary was charged with crimes against humanity and war crimes by the Khmer Rouge tribunal. Ieng Thirith was also arrested and charged, though she was released by the court last year due to advanced mental illness.

“It is hard for me to have any remorse for a leader within a regime that presided over the deaths of millions of Cambodian people,” Youk Chhang, director of the Documentation Center of Cambodia, said in a statement on the death of Ieng Sary.

“His death is no victory and it carries little value for the regime’s victims who patiently wait to see justice done.”