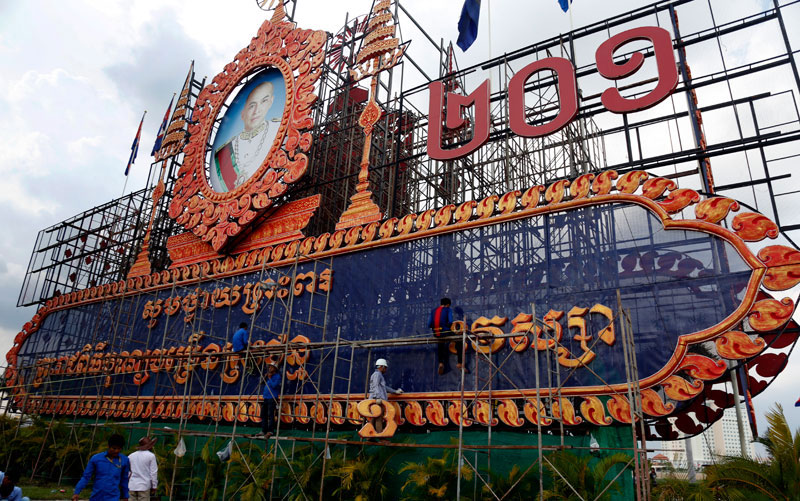 The heads of Cambodia’s two Buddhist sects blessed King Norodom Sihamoni on Wednesday ahead of his 62nd birthday today, while hoards of wellwishers are expected to flock to Phnom Penh’s riverside for a fireworks show this evening, an official said.

Chhin Ketana, secretary-general of the National Committee for Organizing National and International Festivals, said that Tep Vong and Bou Kry, leaders of the Mohanikaya and Dhammayuth Buddhist sects, held a ceremony on Wednesday to bless the king at the Royal Palace.

Mr. Ketana added that security for today’s fireworks show had been heightened after a firework misfired at October’s celebrations for the 10th anniversary of the king’s coronation, killing one man and injuring seven others.

“The security has been prepared for the ceremony and there will be no incident like last year,” he said.

Despite plenty of adoration for the king among visitors to the Royal Palace on Wednesday, there were hints from some that the younger generation is not as devoted to King Sihamoni as older generations were to his late father, King Norodom Sihanouk.

“Before, my parents’ generation respected the king more; the younger generation do not care as much,” said 20-year-old student Son Panha, who was taking photographs with his friends inside the palace.

“Now, when there are ceremonies, fewer young people come…. I think there is less coverage of him,” said Mr. Panha, adding that he believed the king’s influence was “evaporating.”

His theory was echoed by Thon Sochun, a 33-year-old monk from Kandal province, who, despite declaring his love for the king, conceded that he was fonder of his father.

“The king is considered the same as us, but special, and every level of society—whether rich, middle class or poor—loves him,” Thon Sochun said.

“If we compare the old and the new king, the new king is less popular. The old king had more sympathy from the people and did a lot of work for the country, yet the new one just had to take the role. I love the old king more because he was more gentle,” he said.