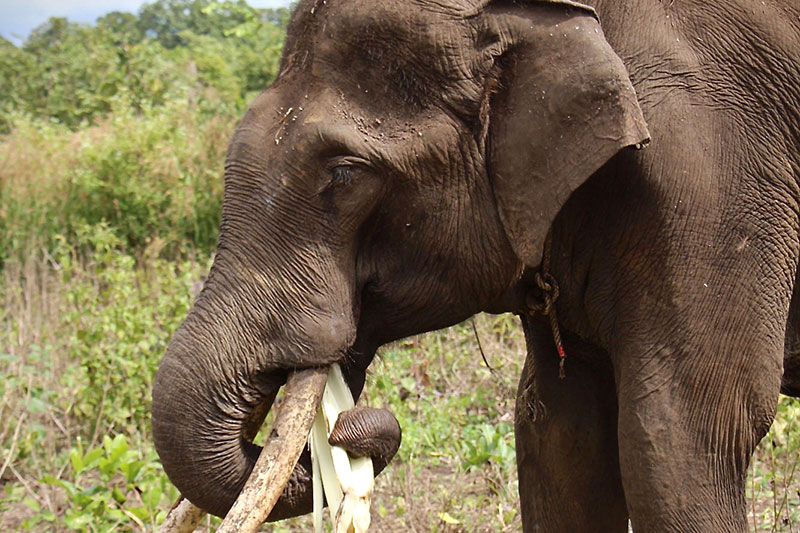 An elephant that killed its owner in September in Mondolkiri province has been sold to a foundation in neighboring Ratanakkiri province, the organization said on Wednesday.

“Nobody wanted a killer elephant. They said the killer elephant would kill again,” said Pierre-Yves Clais, the vice president of Airavata Elephant Foundation.

His foundation agreed to buy the elephant, named Bak Mai, for $17,000 early last month from 15 families, he said, though the full amount is yet to be paid.

The plan was to walk with the 32-year-old male elephant through the jungle to the foundation’s headquarters near O’Katieng waterfall in Ratanakkiri, about 170 km away, he explained.

Mr. Clais could not say when the journey would start, but said that he expected it would take longer than a week, during which time the mahouts and elephant would sleep in the jungle.

Once at the foundation, Bak Mai would be left alone in the protected forest to be rehabilitated, he said.

“We think Bak Mai deserves a second chance,” he said. “Bak Mai was previously working in tourism and he was OK.”

Pang Pich, site manager for Airavata, said he had been visiting Bak Mai since October, and found that the families who owned the elephant had tied it to a tree and left it in the mud to starve.

Bak Mai was a strange elephant, he said, recounting how on Saturday it began to shake uncontrollably and refused to keep moving, before making a run for the forest. The elephant was recaptured by Mr. Pich’s mahouts, as well as villagers nervous about their farms.

Mahaich Hong, 38, a resident of Mondolkiri’s Pech Chreada district and the caretaker of nine elephants, said that while male elephants frequently ran off, it was rare for one to hurt or kill its owner, as Bak Mai had done to Pop Sreang, 55.

“No one was brave enough to take care of it again,” he said.

“We can compare [male elephants] sometimes to someone who is drunk from wine,” he added. “When people are drunk, they cannot stay near other people. They must go into the forest.”

(Additional reporting by Aisha Down)