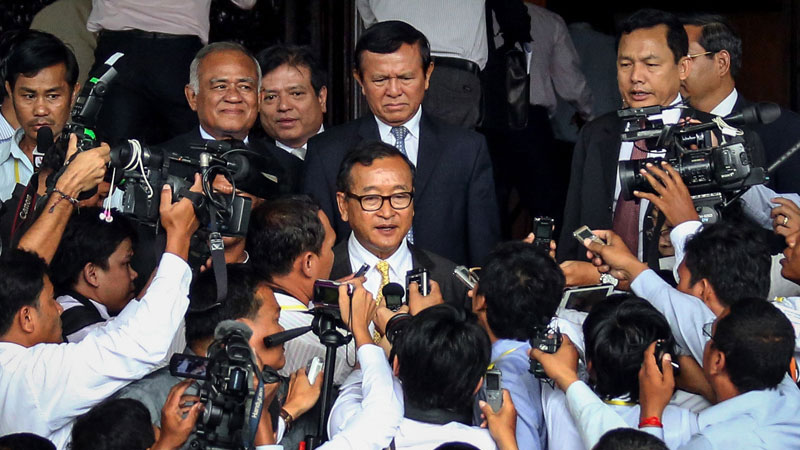 CNRP Vice President Kem Sokha said in a speech in the U.S. last week that he was unhappy with the opposition party’s decision to end its boycott of the National Assembly last year but was prepared to “swallow gravel and rocks” to maintain unity with party leader Sam Rainsy.

In a video recording of a speech delivered to Cambodian-American CNRP supporters in California on Friday night, which was posted online Monday, Mr. Sokha said he was opposed to the results of the negotiations with the ruling CPP but felt obliged to publicly support them.

“We got a very short agreement and it was not clear or detailed, so the agreement could be interpreted in many ways, but it was also the basis to do work on other things. It was not all bad, but it did not satisfy us fully,” he said.

The July 22 agreement, forged during a meeting at the Senate led by Prime Minister Hun Sen and Mr. Rainsy, ended the CNRP’s boycott of its 55 seats in the National Assembly following the disputed 2013 national election.

In exchange for the opposition’s effective legitimization of the CPP’s election victory, the ruling party agreed to relinquish control over the National Election Committee to allow for equal representation by the CNRP on the body before the next elections in 2017 and 2018.

Mr. Sokha appeared unimpressed with the deal on the day of its signing, standing outside the Senate with a pronounced grimace as Mr. Rainsy and other opposition officials grinned and shook hands with Mr. Hun Sen and other members of the CPP delegation.

The deputy opposition leader suggested Friday that he felt at the time that the agreement gave Mr. Hun Sen too much leverage over the opposition—a prediction that came true in later negotiations—but said that splitting with Mr. Rainsy could have led the opposition back to a time when the two leaders led their own warring parties.

“I knew in advance that when we joined the National Assembly, everything would be in his hands,” he said of Mr. Hun Sen. “Without the unity between the Sam Rainsy Party and the Human Rights Party, there would not have been that [election] day when people stood up across the nation.”

“What the ruling party is most scared of is unity, and if we have different views on policies and break up due to this, we are losing before we even fight,” Mr. Sokha said. “We are patient, and we swallow gravel and rocks in order to continue to make our unity stronger and not be tricked by the dictatorial ruling party.”

Mr. Sokha said compromises are necessary in politics if leaders want to avoid the bloodshed and disunity of bloody revolutions.

“Our intention was to change things completely but we know that developments in politics do not always go as we wish,” he said. “Sometimes we cannot implement [changes] 100 percent, because we are not making a revolution.

“We know and have experienced that when there is a revolution, the Khmer always lose. Each Khmer side loses and dies, and neighboring countries take advantage.”

Contacted by phone Monday, opposition leader Sam Rainsy acknowledged that Mr. Sokha opposed the deal with the CPP when first presented with it, but said the CNRP vice president later came to recognize its necessity.

“What is important is, in the end, we came to the same conclusion and agreed to move forward, and this is the most important thing in any organization,” Mr. Rainsy said.

“Between several people, there are always some points where we disagree, but we have to make sure that we agree from the very beginning that if we have some divergences, in the end we came to the same conclusion.”

The key provisions of the deal signed on July 22 by Mr. Hun Sen and Mr. Rainsy were first floated in April after a phone conversation between the leaders. However, Mr. Sokha—who was also visiting the U.S. at that time—appeared to veto the agreement.

“Our party has a democratic core, so when we want to do anything, there must be the signature of Kem Sokha, the vice president, and me, the president,” Mr. Rainsy said on April 11 after the agreement fell through. “If we consider our heart, Kem Sokha and I are only one person.”

Asked on Monday what led Mr. Sokha to agree to the deal three months later on July 22—exactly a week after the high-profile arrest of seven opposition lawmakers-elect—Mr. Rainsy said Mr. Sokha’s views on the utility of the deal had changed.

“It was a matter of weighing the pros and cons, and then you come yourself to the conclusion that the pros outweigh the cons,” Mr. Rainsy said. “Sometimes it is me who is reluctant to do something, but in the end I am convinced to join the opinion of the majority.”

The opposition leader said that he and Mr. Sokha are now on the same page about the deal, and are focused on winning the next national election in February 2018.

“Now, Kem Sokha and I fully agree that it was worth playing the game,” Mr. Rainsy said.

“The risk was worth taking, and now…we are realistic and we believe we can reach a position that is on the whole satisfactory.”