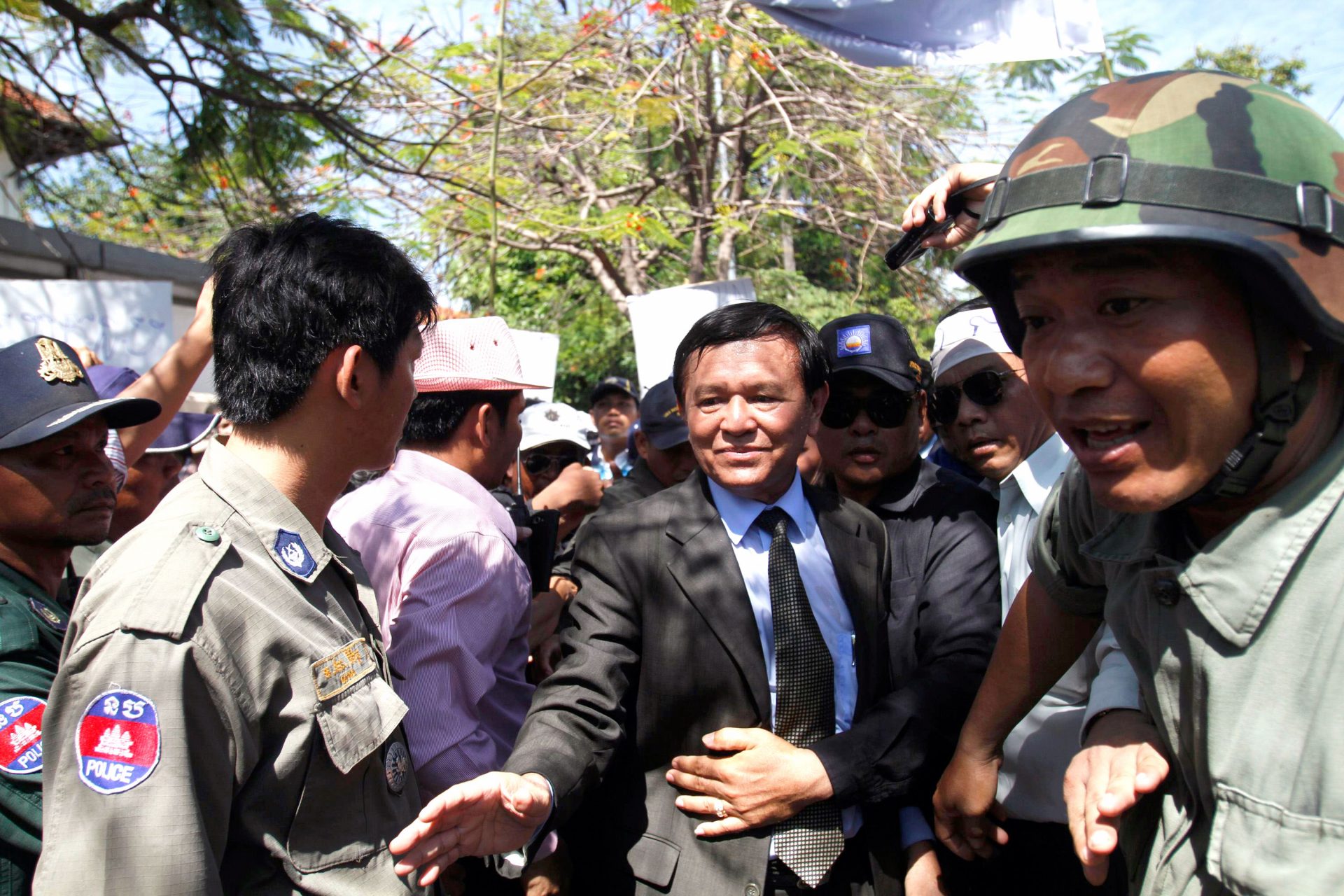 Kem Sokha, acting president of the opposition Cambodia National Rescue Party (CNRP), on Monday rallied a 3,000-strong crowd of supporters at Phnom Penh’s Freedom Park saying that Prime Minister Hun Sen’s decades-old leadership in the country had gone on for far too long.

“The CPP has been in power for more than 30 years and has made us lose all of the natural re­sources,” Mr. Sokha told the crowd.

“Under the corrupt leadership, we have lost land and natural resources. We, Cambodian citizens, cannot accept that. Prime Minister Hun Sen said he was going to stay in power till he is 90 years old, can we accept that?” Mr. Sokha asked the crowd through a megaphone.

“Now he is reducing [the length of] his leadership until he is just 74 years old, but can we ac­cept that, everyone? No, we can’t accept that. When people get sick, there is no doctor to treat them. We’ve lost forests, can we allow him to continue leading?” he asked.

“Voting is a nonviolent weapon to bring us a change in leadership in 2013. We want a change through a free and fair election. We are protesting nonviolently. We do not follow the Khmer Rouge,” Mr. Sokha said, flanked by CNRP lawmakers Mu Sochua and Prince Sisowath Thomico, who recently joined the opposition party after spending years as a spokesman for the late King Father Norodom Si­hanouk, who died last year.

“Let us use the TV to debate. Do you dare? That is called equality,” he said.

After his speech, most of the 3,000 participants at the rally marched on to the European Union offices where Mr. Sokha met with Ambassador Jean-Francois Cautain as riot police blocked his supporters from approaching the E.U. building. Mr. Sokha then walked to the local headquarters of the U.N.’s human rights office, where he met with U.N. human rights envoy Surya Subedi behind closed doors.

Once there, Mr. Sokha asked Mr. Subedi to help push for revisions to the government’s voter list ahead of July’s national election and to bring self-exiled party president Sam Rainsy back in time for the poll.

Back among the placard waving crowd after his meeting, Mr. Sokha said he had urged the U.N. envoy to help them revise a voter list which independent election monitors have warned could disenfranchise many voters on election day. The Committee for Free and Fair Elections in Cambodia has warned that flaws in the list could cause 1.25 million eligible voters to lose their right to cast a ballot.

“We demanded that the U.N. help us get the 1 million Cambo­dians who do not have their names on the voter list to vote, in accordance with international human rights standards,” Mr. Sokha said. “We also called for Sam Rainsy, the opposition leader, to come back and be politically active just like other people are around the world.”

In a letter handed to Mr. Subedi at their meeting, the CNRP also repeated other de­mands for the coming election: that the U.N. en­voy continue pressing the Na­tional Election Committee (NEC) to adopt all his past recommendations on reform; that he urge both the NEC and the government to en­sure a fair media environment for the opposition; and that the NEC postpone the election if it needs more time to revise the voter list.

The CNRP also said that the international community should consider both the elections and the next government illegitimate if the NEC refuses to follow through on the reform demands.

Mr. Subedi, whose recommendations include the creation of an independent NEC and Mr. Rainsy’s unconditional return, is scheduled to meet with the NEC this morning.

The NEC has defended the voter list and called its critics uninformed. And though the NEC has the power to set certain rules, it claims that all the reforms the opposition is asking for are in the hands of lawmakers.

As for Mr. Rainsy, who currently lives abroad to avoid an 11-year pris­on sentence, the government has said he would have to face his convictions if he ever returned. Mr. Rainsy and his supporters insist the charges—inciting violence, destruction of property and disinformation—are all politically motivated.

Despite their far superior numbers, the CNRP supporters did not make it to the front of the U.N. human rights office Monday morning. About 100 members of the Cambodia for Confederation Development Association had already staked out the spot in front of the U.N. office.

Officially, the group advocates for the rights of moto-taxi and tuk tuk drivers but has grabbed headlines for holding rallies against anti-eviction activist Yorm Bopha, who is currently serving a three-year prison sentence for ordering a physical assault on two of the association’s members. Ms. Bopha’s supporters insist she was targeted for her activism and accuse the association of taking its orders from the government, a charge the group denies.

CNRP security guards kept party supporters away from the association members, who came with their own banners and megaphones, so as to avoid an altercation.

But that could not save the moto-taxi and tuk tuk drivers from being flanked by about a dozen of Yorm Bopha’s fellow anti-eviction activists, who came armed with banners of their own and ended up in a shouting match with the association across only a few feet of space.

Not to be left out, both groups met separately with Mr. Subedi inside the U.N. office after the envoy’s meeting with the CNRP. Ms. Bopha’s supporters urged the envoy to help secure her release, while the moto-taxi association asked him to reject their claims that Ms. Bopha was convicted for her activism.

Mr. Subedi, who arrived Sunday for a weeklong visit to follow up on his past recommendations to the government, did not reply to a request for comment on the day’s meetings. The U.N. human rights office confirmed the meetings but would not elaborate.

How a temple, and a newer generation, is carrying Cambodian tradition in Fresno

How Has the Russia-Ukraine War Impacted Cambodia’s Foreign Policy?