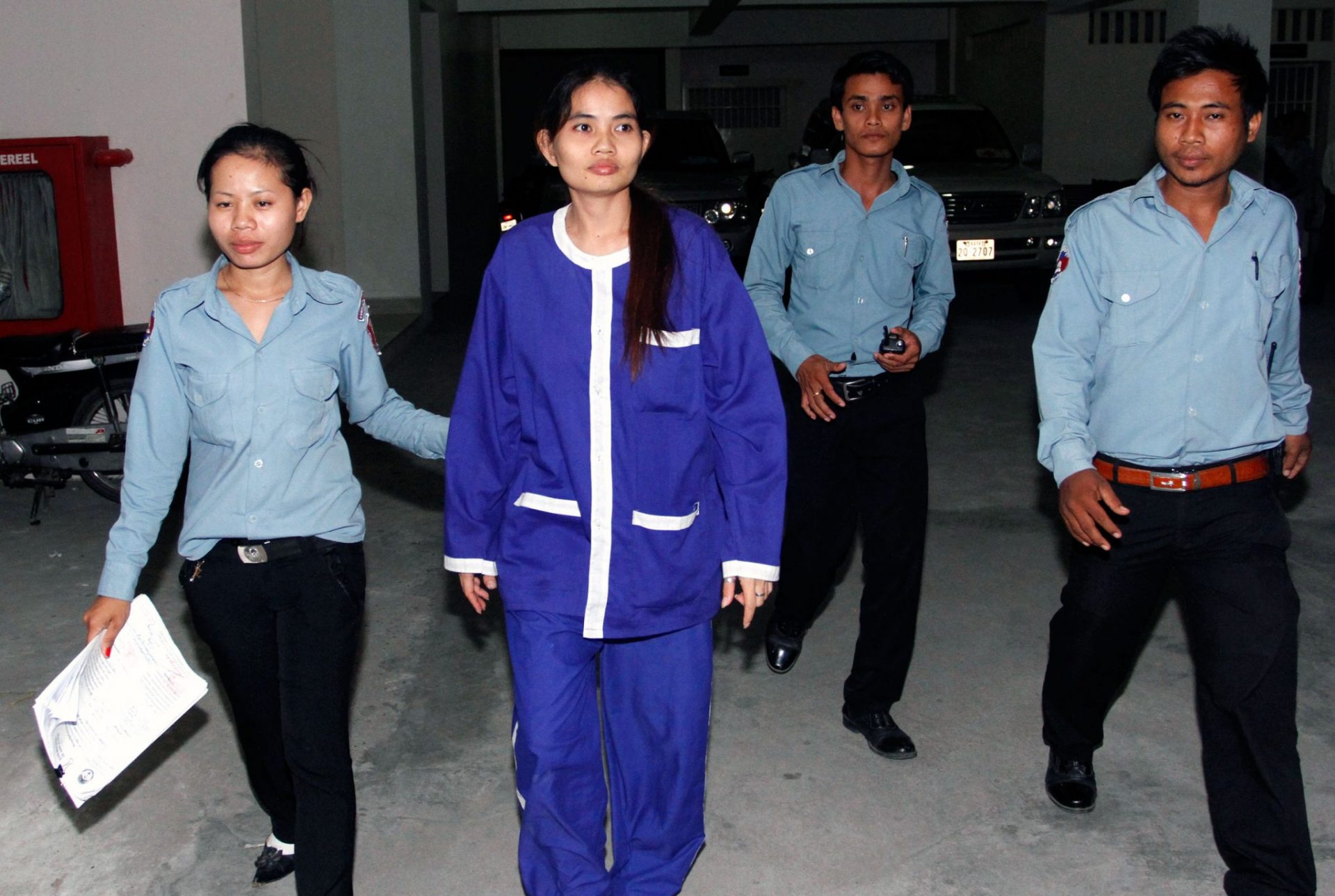 Incarcerated since September 4, 29-year-old Yorm Bopha has languished for more than 100 days inside the walls of Prey Sar prison. Her supporters say her conviction on charges of assault was designed to silence an outspoken activist, but even in jail, her voice is being heard in the form of songs Ms. Bopha has been writing from her prison cell.

Ms. Bopha, who was sentenced to three years in jail on widely derided assault charges on December 27, composes her songs in freehand on paper, then gives them to her husband, Luos Sakhorn, who takes them from Prey Sar and distributes them to Ms. Bopha’s supporters and fellow activists.

“I thought wrong, I thought there was justice in society,” goes a line from “Life Like a Bird in a Cage,” a song penned by Ms. Bopha during her jail stint that uses the melody from a traditional Khmer song called “Your Heart Has Changed.”

“Citizens suffer and cry because the authorities have brutal hearts/ Citizens are at pains to help, to protect land, homes, to keep for children,” go the lyrics from the song.

“Beat up, arrested, detained/ Citizens cry almost until death/ Who can resolve the problem for poor villagers?/Or will they just wait and die?”

Ms. Bopha’s jailhouse blues have been taken up by her supporters as they rally for her release, and for a resolution to the long-running dispute over Boeng Kak, where thousands of people were evicted to make way for a real estate project headed by CPP Senator Lao Meng Khin.

As they awaited the verdict in her case last week, fellow activists, hemmed in by riot police, joined in a chorus of the songs.

“The police, when they hear that song, they really pity her and understand,” said Sia Phearum, director of Housing Rights Task Force. “Their commanders order them to beat the women, but they reject.”

Videos of the protesters singing Ms. Bopha’s songs have been posted online and shared by sympathizers. In the tradition of protest songs, they hope that Ms. Bopha’s blues will inspire solidarity with the activist and her cause.

“She is suffering, but in prison she wants the public to help her,” Mr. Phearum said. “When the leaders [of the protest] sing that song, it really affects my heart, it inspires the people’s hearts.”

Ms. Bopha’s lawyer is set to file an appeal today, amid widespread calls for the court to reconsider the verdict.

Another song from the jailed activist, “What Day Will There Be Freedom?” rails against the corrupt government officials and ruthless companies that activists blame for forced evictions. This song uses the melody from the traditional tune “What Day Will You Get Married?”

“The days of smiles turn to sadness/Brutal officials have no mercy/There were comfortable lives at Boeng Kak before the horrible company moved people away/They developed but why is there no change/for the poorest people.

“What day will there be freedom?/Please, officials, tell the people/or does the man just hunger for dollars and make the citizens suffer.”

And in the song “Very Painful Without Justice,” Ms. Bopha laments her own predicament.

“I wanted to advocate for land and housing, but I am poor and I have no rank, so I was violated/Officials, help the citizens in poverty to get freedom.”

Ms. Bopha was convicted alongside her husband and two other family members—who have not yet been apprehended by police—for taking part in the beating of two motorcycle-taxi drivers in August.

At the trial last week, Judge Suos Sam Ath had to choose between the word of the two victims, who admitted to having been drinking in the hours running up to the incident, and Ms. Bopha. He sided with the victims.

Amnesty International considers Ms. Bopha a prisoner of conscience and supporters have staged several protests since the verdict.

“We hope that these songs will make officials aware of our suffering, and find justice for Yorm Bopha,” said Boeng Kak resident Tep Vanny, pledging to continue the fight, both for Ms. Bopha’s release, and for a resolution to the Boeng Kak issue.

“We are not afraid to face arrest because we haven’t yet reached a result.”

Previous articleMinistry of Interior Requested to Further Investigate SEZ Shooting
Next article2012: The Year in News