Intrigue and Mystery in Angkor

In his book “A Woman of Angkor,” American author John Burgess has managed to recreate a world about which little is known beside the spectacular monuments its people left behind. 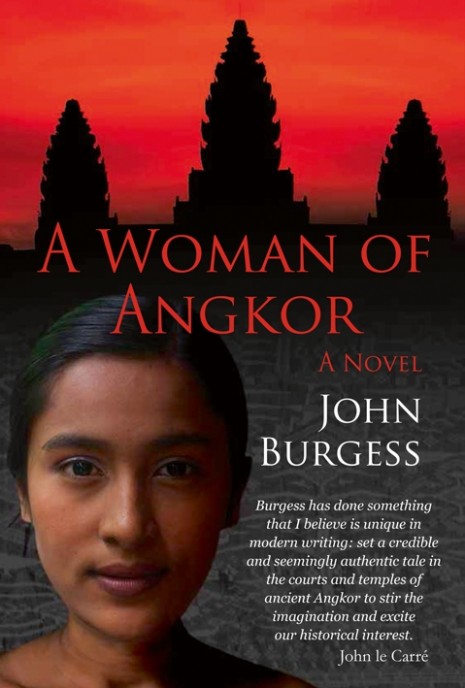 Told by a woman named Sray, the story brings to life the Khmer of the early 12th century, no longer distant figures but individuals going through all the human emotions as they handle daily chores and duties in this stratified universe ruled by an absolute monarch.

Beautifully written by Mr. Burgess, a former Washington Post correspondent in Southeast Asia, the 500-page work is an enthralling novel filled with court intrigues and human dramas against a backdrop of actual historical events.

Published this year by River Books in Bangkok, the novel is also a mystery that unfolds through one suspenseful episode after the next as Sray’s life turns in ways she had never expected; her beauty the cause of events that saddle her with a secret which will burden her all her life, and eventually change the fate of the empire.

Orphaned following an enemy attack that killed her family, Sray grows up in an orphanage for girls managed by a priest—a peaceful environment that she loves. Due to a series of incidents revealed throughout the book, she finds herself married to Nol, settled in a quiet existence that suits her in spite of their poverty.

However, this all changes when a Brahmin priest comes looking for Nol who, as it turns out, grew up in the household of a prince and fled when the prince was killed by a rival who then takes over his estate. Now, the prince’s kinsman Indra has decided to reassemble the prince’s former staff and requests that Nol joins him and takes on the role of parasol bearer, the position his father held under the prince.
Nol’s new patron seeks power. After regaining his family’s estate through assassination and building a reputation as a warrior, Indra kills the Khmer king during a public ceremony. The late king had spent all his time in his garden, leaving the administration of the empire to palace officials and Brahmin priests. So, faced with the formidable Indra, no one dares question his claim to the throne and he is soon crowned Suryavarman II with Nol beside him shading the new king from the sun.

While Nol moves within the king’s inner circle, Sray gets involved in the palace’s supply process. She negotiates with providers throughout the country, even joining the first Khmer delegation to China charged to discuss diplomatic relations and trade. Sray welcomes those absences from the palace as the king has noticed her beauty and she tries to avoid being in his presence. Profoundly religious, she also spends her time making charitable donations.

In the meantime, her son Sovan is assisting the architect commissioned to build a temple for the king. The monument, which would take decades to complete, will become known as Angkor Wat, the largest religious structure in the world.
The author has recreated a truly credible world complete with a scheming concubine and bitter rivalries in the king’s entourage. This is no small feat since there is virtually nothing known of the lives of people at the time. The only source of information on the era are the official stone inscriptions which give away hardly anything about everyday life and wall sculptures that occasionally feature scenes from the era and which Mr. Burgess spent a great deal of time studying.

“The inspiration for Sray, by the way, was a woman mentioned in an 11th century inscription” Mr. Burgess said in an email interview.

Identified as Tilaka, he said, “It describes how her learning impressed the court and how she was given honorary titles. She is described only in ideal terms (the tone of so many inscriptions), but I began thinking about how the ancient Khmers were real people…and had their share of secrets, weaknesses, foibles, etc. So the idea came for a character who was universally respected, who did her best to live up to the religious ideals of the time, but who was carrying a potentially fatal secret through no fault of her own.”

Another source of information the author used is the account of Chinese diplomat Zhou Daguan who visited Angkor in the 1290s. “I also drew on contemporary Cambodian life, which after all is the descendant of ancient Khmer society,” Mr. Burgess said. For example, considering the importance of rituals and traditions in Cambodia, it seems highly plausible that, as portrayed in the book, the role of parasol bearer was a trade with a strict code passed on from father to son: The honor of holding parasols over the heads of princes and kings would no doubt have been highly coveted.

Needless to say, Mr. Burgess, who is based in Washington, has made numerous trips to Cambodia. His first contact with the country dates from 1979 when he covered Cambodians fleeing to the Thai border as the Vietnamese forces were ridding the country of the Khmer Rouge. He was based in Japan during the 1980s and was deputy foreign editor for The Washington Post when he retired in 2008 after 28 years with the paper.

This book, which is Mr. Burgess’ first novel, took him 10 years to write as he was still a full-time journalist when he embarked on the project. “I wrote this book hoping that it would bring to life some of the people who built the place (and also be an entertaining read) and perhaps give the Angkor visitor an appreciation of the society of the time, as best as I could recreate it,” he said.