Countries legitimizing Prime Minister Hun Sen’s regime and propping up the state budget with hundreds of millions of dollars in aid must take a stand now against mounting government attacks on NGOs and independent media, the opposition CNRP said this week.

Political analysts piled onto the call, describing the situation as “too serious” for the international community to ignore and noting potential steps donors could take, ranging from withdrawing ambassadors and canceling aid to imposing visa bans and introducing economic sanctions.

“Donors need to take a clear stance now and communicate that to this government,” said Kem Monovithya, deputy director of public affairs for the CNRP.

“Recent crackdowns need to be reversed and it needs to happen now, not weeks before elections, to lend any credibility at all to the elections,” she said.

Attacks on the media—including an English-language newspaper scene that has long enjoyed relative freedom compared to the restricted Khmer-language press—is part of a large, sweeping assault on critics that has been building for years.

Rights workers have been jailed and increasingly put under surveillance, while a slew of laws have been rushed through the National Assembly to grant near-absolute power to the government to dissolve NGOs or political opposition parties. The laws have only begun being used in recent months, as the government prepares for next year’s crucial national election.

Each step of the way, donor governments have expressed dismay or urged change by releasing statements of varying length and severity, but none have announced major changes in policy toward Cambodia.

Donors are responsible “insofar as they ignored the problem, kicked the can down the road, and allowed us to get into the mess we’re in now, with media freedom about to breathe its last gasp in Cambodia,” said Sophal Ear, author of “Aid Dependence in Cambodia: How Foreign Assistance Undermines Democracy.”

Sebastian Strangio, author of “Hun Sen’s Cambodia,” said there was theoretically any number of actions donor countries could take to pressure the government.

“They could pull their ambassadors, withdraw what aid projects they have left, impose visa bans on senior government officials or introduce economic sanctions,” Mr. Strangio said.

Cambodia’s government relies on foreign aid for about one-third of its national budget, and in 2015 it received about $677 million in overseas development assistance, including grants and loans, according to World Bank data.

According to the data, Japan’s assistance topped $100 million in 2015, while the U.S. gave about $86 million. The Asian Development Bank—to which Japan and the U.S. are the two largest contributors—also provided funds of more than $100 million.

Though veteran observers of the country have called it an unprecedented situation, members of the international donor community have largely followed the well-trodden path of issuing statements and refraining from stronger sanctions, even as the scope of the government crackdown has widened.

The U.S. posted a Facebook statement asking “Is Cambodia Committed to Democracy? You decide!” criticizing the government expulsion of American democracy NGO National Democratic Institute, but has taken little other visible action.

Japan has not taken any public stance on the crackdowns and the Japanese Embassy did not reply to a request for comment, while the U.S. Embassy declined to answer questions.

Meanwhile, the E.U. grants Cambodia its most preferential trade status under its “Everything But Arms” policy, due to Cambodia’s status as a least-developed country, and is the largest importer of Cambodian garments.

The U.S. and E.U. combined import 72 percent of Cambodia’s garment and footwear exports, propping up the country’s largest industry.

In response to the recent government actions, the E.U. issued a statement urging authorities to “apply the law in a reasonable and equitable way.” Its diplomatic mission in Phnom Penh did not reply to emailed questions about whether it planned to do more.

Donor investment and aid would likely translate into political leverage if the countries decided to pressure Mr. Hun Sen’s government. Some political analysts have suggested that drastic steps are needed now to preserve the country’s fragile democratic gains.

“This is getting far too serious now for the international community to ignore,” political analyst Ou Virak tweeted on Tuesday, linking to a Cambodia Daily story about the CNRP being investigated for allegedly conspiring to start a color revolution—an indication the current crackdown is extending beyond independent and opposition-aligned media outlets.

But the chances of that happening are unlikely, Mr. Strangio said, particularly as the whole region slides away from democracy and China increasingly injects hundreds of millions of dollars of aid into Cambodia with no human-rights conditions attached.

Mr. Ear noted that even the CNRP seemed reluctant to stand up for the country’s democratic institutions—not a good portent for any international donors considering getting their hands dirty.

The CNRP has maintained a low-profile throughout the crackdown in an attempt to survive the assault and make it to next year’s national elections intact, even if it loses fellow civil society organizations along the way.

Senior opposition lawmaker Son Chhay said earlier this week that the party did not know how to proceed, and urged the international community to exert pressure on the government, a call repeated by Ms. Monovithya on Wednesday.

“The government needs to be told exactly where the red line is by the international community,” Ms. Monovithya said. The “regime cannot survive without free-world endorsement.”

But that red line is likely further away than the opposition would like, said Mr. Strangio, and that endorsement is unlikely to disappear anytime soon.

“Things will have to get a lot worse—i.e. a lot of bloodshed and chaos—before donor governments start taking serious steps to sanction the CPP government,” he said. 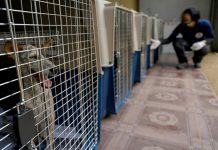 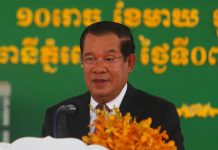