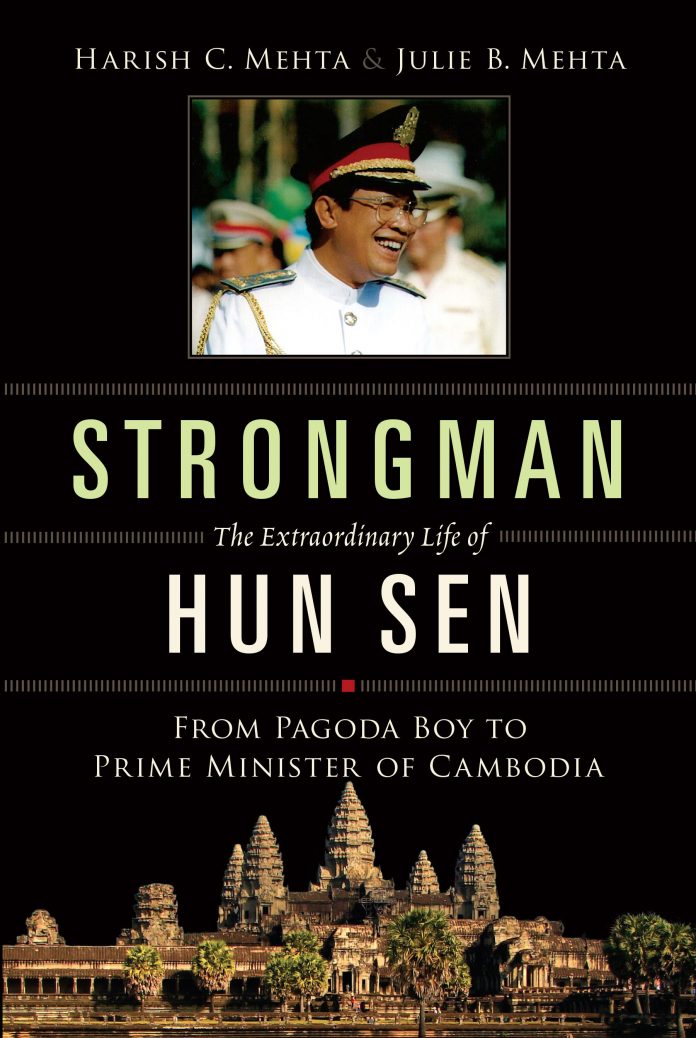 In Praise of a Strongman

The release of Prime Minister Hun Sen’s updated biography last month follows a well-established tradition of books coming out during political campaigns, whether or not they are written by the politicians themselves.

At the request of their publisher, Marshall Cavendish International in Singapore, Harish and Julie Mehta began revising their 1999 book “Strongman, The Extraordinary Life of Hun Sen” a year ago. They were still writing in May but managed to finish the task so that it could get to Cambodia ahead of this month’s national election, which it did. This book, whether in its 1999 or 2013 edition, remains the only work in which Mr. Hun Sen talks of his life at length, and from his own perspective. But rather than making it a substantive biography, the authors turned the work into a lengthy praise of the man, which ends up weakening the credibility of the work.

Though based on more than 20 hours of interview that Mr. Hun Sen granted Mr. and Mrs. Mehta in the late 1990s and early 2000s, the book fails to present a thorough exploration of Cambodia’s “Strongman,” offering instead an idealized portrait of the prime minister written by two enthusiastic fans.

The book, in its updated version, provides a snapshot into Mr. Hun Sen and his life with little or no dissenting views or facts to blur the picture.

“This is the first full-length biography of Hun Sen, a man of complexity and contradiction, and one whose life, or lives, have been extraordinary in range and diversity,” the Mehtas—two researchers and university teachers living in Toronto—write in their introduction.

Topics in the book range from Mr. Hun Sen’s youth interrupted by the civil war and his decision to join the Khmer Rouge in 1970, to his rise to power in the 1980s and the hurdles he faced in the 1990s in order to retain power. Since 1985, Mr. Hun Sen has become, the authors write, “One of the longest-serving heads of government in Southeast Asia.”

The Mehtas brush by vast areas of history, debate, conjecture and critique with passages such as: “Hun Sen and his senior CPP colleagues brought about a significant change in national politics: They ended the domination of politics by the Cambodian royal family and the Phnom Penh elite who had been educated in France or under the French education system [in the 1960s]. Born in a village and espousing strong rural values, Hun Sen’s earthy outspokenness resonated powerfully with common Cambodians.”

For the Mehtas, “earthy outspokenness” suffices to explain Mr. Hun Sen’s nearly 30 years in power. And, according to them, the era of royal family members, whether Sisowaths or Norodoms, having any political weight in the country is over.

Written in the style of an official biographies was meant to make the reader admire as well as like the person described. The book speaks of Mr. Hun Sen the private man, mentioning his favorite dishes—prahok and pickled green pineapple—and his habit of only sleeping a couple of hours per night.

“His simplicity perplexed the people around him,” the Mehtas write.

“His family and aides found that it was very easy to take care of him.

“They sometimes wished he would be more demanding….Giving little thought to his personal comforts, Hun Sen worked through breaks. He would not eat dinner at a fixed time, refusing to leave office until all the papers had been read, discussed and signed.”

The book also talks of his otherworldly beliefs. The prime minister is convinced that his granddaughter Tep Thida is the reincarnation of his mother who passed away in 1998, the Mehtas explain.

As they faithfully report, Mr.Hun Sen believes himself to be under divine protection.

Talking about attempts against his life, he told the authors in 2001: “It seems there is some great power, somebody, or something, that always follows and takes care of me.” He was referring to a rocket attack against him in 1998, which he thought had failed because the rain god had intervened and soaked the rockets, preventing them from properly igniting. Moreover, he later told the Mehtas, “I have my ways of survival. I am not a moving target for people to shoot at.”

The book’s first edition in 1999 was based on several interviews the Mehtas had conducted with Mr. Hun Sen and his wife Bun Rany in the late 1990s. This second edition includes information obtained during meetings with the couple in the early 2000s as well as with their son Hun Manet in 2003.

Speaking of the burden of being his father’s son, Mr. Manet had told them during a 4-hour interview: “Very often, I had to put up with unimaginable news and information directed against my family, particularly my father. Fortunately, we were able to adapt and overcome these things over time.”

Although the prime minister had been adamant that his children would not enter politics when the Mehtas had first interviewed him, he has changed his mind in the new edition.

Mr. Manet now holds the rank of major general in the Royal Cambodian Armed Forces and is deputy chief of his father’s thousands-strong personal bodyguard unit. He is viewed by some as the future chief of the armed forces, while his younger brother Hun Many and brother-in-law Dy Vichea are running in the national election, the Mehtas write.

The book’s first edition had spoken, in a somewhat romantic-novel style, of Mr. Hun Sen and Mrs. Bun Rany joining the Khmer Rouge in 1970.

“We were all rebels with a cause…answering Prince Sihanouk’s call,” Mrs. Bun Rany told the authors. Following his ousting by the Lon Nol government in 1970, the late King Norodom Sihanouk, based in Beijing, had allied himself with the Khmer Rouge and urged Cambodians to join the Khmer Rouge and fight the U.S.-supported government.

By the time the Khmer Rouge seized power in April 1975, Mr. Hun Sen was an officer and had lost his left eye in battle. He was a middle-ranking, Khmer Rouge military commander when he decided to flee to Vietnam in 1977 as internal purges within the Pol Pot regime drew closer. He would return later with the Vietnamese army and oust the Khmer Rouge.

This second edition of the book includes comments that Harish Mehta jotted down in May 2001 when Mr. Hun Sen invited him to the Royal Cambodia Phnom Penh Golf Club where he was playing with three Asian ambassadors.

Mr. Mehta could hardly contain his admiration for the prime minister.

“He played with panache, ferocity and good humor, undaunted by having only one functioning eye,” he writes. As Mr. Hun Sen told Mr. Mehta, he did a great deal of work at the golf club, even signing state documents.

The Mehtas explain that the prime minister has retained power due to his carefully crafted strategy that has included: building a consensus around foreign and domestic policies within the government and his own CPP party, establishing his personal network of supporters among senior officials, and developing international support for his national and international objectives.

The authors unabashedly state, both in their prologue and their final chapter titled “An Eventual Validation, 1990-2013,” that Mr. Hun Sen deserves praise for being the one who created conditions favorable for foreign investment and the national economy.

“With Hun Sen tightening his grip, the country became stable by degrees, with investors reporting that never before had business confidence been so high,” they write in the prologue.

Concrete examples of that “tightening” grip are missing from the Mehtas’ chapters.

And then, they say, Mr. Hun Sen’s dec-
ades old grip has allowed some things to slip through, namely corruption.

“When the old cancers of corruption and crime proved difficult to remove, Hun Sen warned his own partymen to change their ways, or risk being sacked,” the prologue reads.

Corruption, the authors explain in a casual aside with no further explanation, is due to politicians, civil servants and an entrenched tradition that the prime minister simply cannot thwart.

“Hun Sen had succeeded in preventing the return of the Khmer Rouge and had ensured stability, but he would be criticized by many Cambodians for failing to stem the growth of corruption within the government, and for adopting an authoritarian form of governance,” they write.

As is the case with official biographies, the Mehtas always put Mr. Hun Sen’s viewpoint forward whenever a sensitive issue comes up.

The prime minister is said to have responded, the Mehtas recount, that he was “victim of a campaign” regarding his human rights record.

And then he gives the U.S. president a quick lesson in politics: “A talented and experienced negotiator, Hun Sen explained to Obama the harsh realities of life in Cambodia,” the Mehtas add.

The authors’ Cold-War style, anti-American sentiment is rather apparent throughout the book.

In addition to consulting U.S. government archives and research documents, the Mehtas mentioned in their press release on the book’s second edition that they interviewed government and foreign officials, members of the royal family as well as the prime minister’s teachers, friends and his brother Hun Neng in the course of compiling information.

The Mehtas say in the book’s introduction that Mr. Hun Sen did not ask to see their manuscript prior to publication, which they were free to write as they saw fit.

His trust in them was justified.

The Mehtas do not hide their admiration for Mr. Hun Sen. They even included in this second edition a photo taken in 2000 featuring the authors with Mr. Hun Sen holding a copy of their first edition. Smiles all around.

Their admiration also extends to Mrs. Bun Rany. Speaking of meeting her in 2001, they write, “On that afternoon, May 15, 2001, diplomats in Phnom Penh were praising her moving speech at a meeting of the Cambodian Red Cross.”

Speaking of her work as Cambodian Red Cross president, the Mehtas continue that “her sincerity in supporting the causes of the world body, and her familiarity with charitable work and needs of the underprivileged, had won the hearts of the Cambodian people and the international community.”

The authors end the book saying that, with his good health, Mr. Hun Sen may very well remain in power until his 90th birthday as he has publicly said he plans to do.

This month’s national election being one more step toward his achieving his goal.