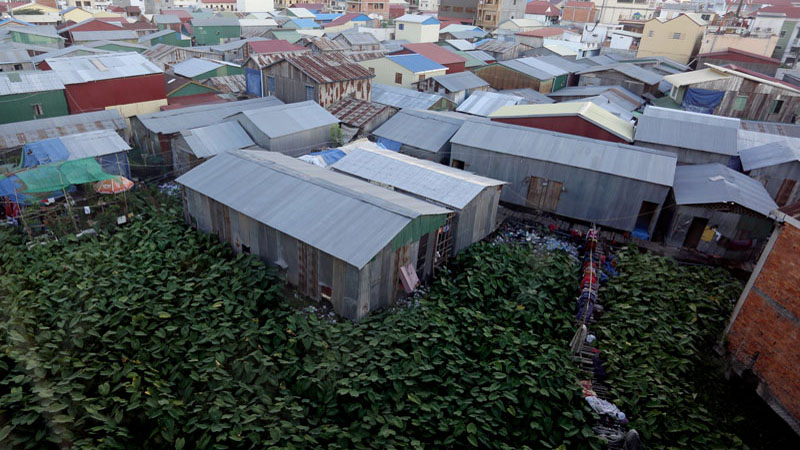 In a labyrinthine shantytown in Phnom Penh’s Sen Sok district, an impoverished community is awash in crystal methamphetamine, or “ice,” a cheap and highly addictive drug being peddled from family homes and used by residents as young as 12.

Police made more than 50 arrests in the area last month, but community members say the kingpin is a high-level official and that local authorities collude in the drug trade.

Just across the road from Preah Kosamak hospital, Trapang Chhouk village in Toek Thla commune is obscured from sight, but each narrow alley off the street is an entry point into a rickety maze of wooden walkways and dead ends connecting some 200 corrugated huts that totter over a rubbish-clogged drainage pond.

It is no secret here that the floating village is a crystal meth den. The wooden planks, littered with empty “baggies” and other evidence of drug use, are patrolled by a gang of gaunt teenagers, who offered to supply reporters with “whatever you want.”

“Be careful. The people in there, they sell drugs like they are selling fish,” said a moto-taxi driver parked nearby, who like all interviewees spoke on the condition of anonymity for fear of retribution.

Inside the neighborhood, members of two families whose huts stand about a meter apart across the narrow walkway described an open market where ice is sold from most doorways. They said that the ubiquity of the drug’s use foretold a bleak future for their children. They also admitted to selling the drug.

“Drugs are distributed here all the time, every day and night,” said the 45-year-old father of one family. His neighbor, a woman in her forties, estimated that at least 80 percent of all families in the community sell crystal meth to supplement legitimate sources of income.

The woman’s 12-year-old daughter said children as young as her are habitual users and that young people from surrounding neighborhoods were flocking to the area.

Police and local authorities say they are doing their best to clean up the village. But carrying out raids in the area is logistically difficult, they explain, as dealers use lookouts to evade arrest, leaving only users and low-level distributors for police to sweep up.

“Police and local authorities know all about the drug distribution,” said another resident and small-time dealer, 46, adding that most people pay officers bribes to avoid arrest.

“The ‘big fish’ is a high-ranking general, and when police come, they do not arrest dealers based here, just users and outsiders,” he said.

Tann Navin, the commune chief since 2009, denied that local authorities were involved in illegal activity. But he admitted that a high-ranking military police official was suspected of backing the supply and distribution of crystal meth in Trapang Chhouk.

“I think it’s true that a high-ranking officer is behind this, which makes it hard to suppress, as dealers are warned ahead of time and we can only arrest users,” he said. “Also, the users often come back a few days later because punishment for using is slight.”

Many of the families who live in the impoverished community lost their original homes in a 2008 fire. When authorities failed to relocate them, they built crude shelters over the wreckage. According to Mr. Navin, the area also houses a number of transient renters, which makes it difficult to estimate how many people actually live there.

“We know there are about 200 houses, but we can’t control the number of people who are moving in and out,” he said, adding that building on the swampy land is illegal as it is privately owned. He said he did not know who the owner was.

Sen Sok district police chief Mak Hong dismissed accusations that officers were colluding with drug dealers as pure rumor and blamed commune authorities for tolerating illegal construction that had created a haphazard warren that is difficult to access and navigate.

“Neither police nor any other authorities are involved with drugs there, so we cannot accept the residents’ accusations blaming us for the problem,” he said, adding that police are continually carrying out raids in an effort to flush out dealers.

“The location of the area is too complex, and some of the houses are built right in the water, so when authorities crack down, dealers can jump into the water, and some hide in the water underneath the floor.”

“Those houses must be shut down or people must be forced to register…because the drugs are being brought into the area from elsewhere and the dealers are unknown,” he said.

“If the houses were not there, there would be no drugs. But it is not the police’s responsibility to close this place.”

Bann Sopheap, chief of the municipal military police’s anti-drug department, whose unit has led most of the recent raids in Trapang Chhouk, said rumors that the community was being lorded over by a high-ranking military official were untrue and that purging the area of dealers was a work in progress.

“We are not stopping our crackdown on either drug users or smugglers there, and our officers are there every day investigating to find the ringleaders,” he said. Three men arrested in the area were sent to the Phnom Penh Municipal Court on Friday and charged with using and distributing crystal meth, he added, while 11 more had been placed in pretrial detention.

Tip of the Iceberg

Dave Harding, a technical advisor for drug programs at the NGO Friends International, said the situation in Trapang Chhouk is just the tip of the crystal meth iceberg in the country.

The fact that drug abuse, and associated criminal activity, is flourishing in certain impoverished urban communities—which are not lucrative markets in the global drug trade—suggests that the volume of narcotics available in the country is significantly greater than authorities are willing to admit, he said.

“When a community is this isolated, it can become a no-go area, and often crime operates like a spider web on the ‘bong thom,’ or big brother, network, with a well-connected person at the center and the people on the outer edges get picked up by now and again by police,” he added. “[T]he person at the center won’t be touched.”

A European Union security report on Southeast Asia and China released in April found that in Cambodia, corruption within police ranks was impeding proper enforcement of drug laws.

“Law enforcement capacity remains limited in Cambodia. Corruption within a handful of law enforcement officials should be addressed with further efforts to reduce drugs trafficking and abuse,” the report says.

In its annual report released in March, the International Narcotics Control Board found that in 2013, Cambodia had become a regional hub for heroin, cocaine and methamphetamine trafficking, and expressed concern that methamphetamine was also being produced in the country for a domestic market.

The report also criticized the government for failing to pursue major drug traffickers.

“Lower-level drug traffickers and drug abusers continue to be the primary targets of drug control efforts in Cambodia,” it says.

A 54-year-old resident of Trapang Chhouk, whose son is currently serving a prison sentence for using and distributing small amounts of ice, lamented this injustice.

“They will never target the big dealers or a three-star general,” he said. “It is easier to arrest people like my son.” 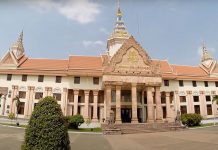 Inside a forgotten kingdom: Incredible unseen images of China, Cambodia and...