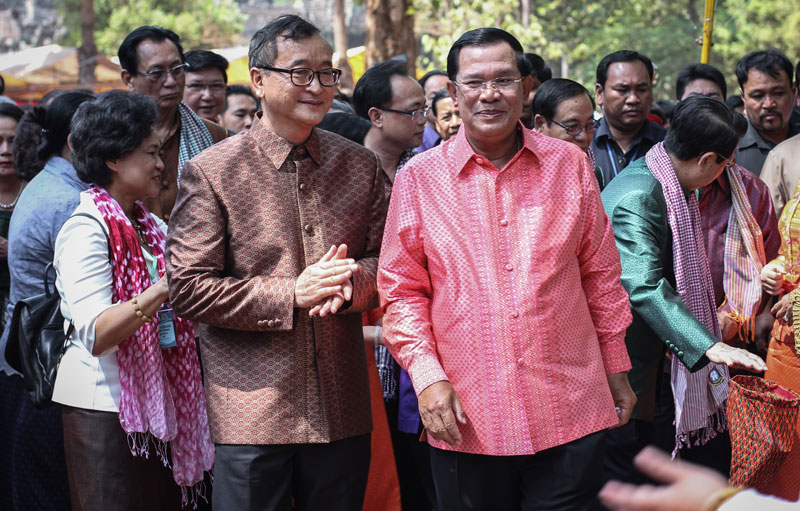 After years of bitter rhetoric and violence, a freshly pardoned opposition leader Sam Rainsy returned from exile in France to announce the end of Cambodia’s zero-sum political culture and a new start in his relationship with Prime Minister Hun Sen.

“We want to create a new culture, which is the culture of dialogue, and to abandon attacking each other, in order to have a united stance to protect national interests,” Mr. Rainsy said after a meeting at the premier’s Phnom Penh villa.

“Prime Minister Hun Sen appealed to me to use wisdom to help build the country,” he said.

It was February 2006, and an enthusiasm for the new “culture of dialogue” being touted by Mr. Rainsy and Mr. Hun Sen—apparently absolved of a history of ruthless contempt for his opponents—was the opposition’s latest fixation.

“This is a new culture for Cambodia, to have the head of government talk to the opposition party,” opposition lawmaker Eng Chhay Eang said at the time. “When Khmer learn to talk to Khmer, it is good for the country.”

Yet three years later, amid a slew of government lawsuits against opposition activists and parliamentarians, Mr. Rainsy uprooted a Vietnamese border marker during a protest march and found himself slapped with criminal charges and facing up to a decade in jail. He again fled to France, remaining there until July 2013 as Mr. Hun Sen enjoyed a period of unrivaled dominance.

Now, nearly a decade on from Mr. Rainsy’s original proclamation of the “culture of dialogue,” the term is once again on his lips, with the opposition leader optimistically promoting an idea that Mr. Hun Sen is a changed man.

At the Angkor Sankranta festival in Siem Reap City last week, Mr. Rainsy even sat smiling behind the premier for one of his extended speeches, with the pair later cheerfully touring the festival together in traditional straw hats.

“Our country has reached a new point with the presence of His Excellency Sam Rainsy…on stage today,” Mr. Hun Sen said in his speech, turning to Mr. Rainsy. “The culture of dialogue has happened in Cambodia and replaced the culture of conflict and killing each other.”

On the surface, Mr. Hun Sen’s new mood appears to be based on a belief the 2018 national election will be fought over a middle tranche of unaligned voters desperate for reforms but hesitant for regime change, according to political analyst Sok Touch.

“It is a way to get the votes of some moderate CPP voters who may be considering changing to CNRP, as the government must change and improve, otherwise it might lose the next election,” Mr. Touch said.

“It is also correct that small percentages could be taken away from the opposition party,” he said. “They can argue and compete during elections but now they have to be sportsmen to accept the election result, whoever wins.”

Under such a view, Mr. Rainsy’s decision to potentially lose some supporters by getting close to Mr. Hun Sen is part of a strategy designed to demonstrate that the old political culture of violence and division has truly been left behind.

“There is now a new approach from the opposition,” said Thun Saray, the head of local rights group Adhoc and a prominent civil society leader since the 1980s.

“This time, I think that Sam Rainsy is being more friendly than before and trying not to criticize the CPP so strongly to try to create a smooth transition of power if the opposition wins at the next election,” Mr. Saray said.

For Mr. Rainsy, the rapprochement with Mr. Hun Sen is indeed spurred by a sincere belief that the prime minister can be coaxed into a more democratic disposition and convinced to cede power if he does lose in 2018.

“I used to hate Hun Sen as I would have hated any world’s tyrants,” Mr. Rainsy said in an email Monday. “But it has come recently to my mind that I should not hate anybody as a human being, as ‘bad’ as they may be, but I should only hate and combat the crimes that any ‘bad’ person has possibly committed.

“I know that even in a monster there can be can a spark of humanity,” he added. “The most challenging question is how to help humanity grow everywhere.

“When you are free from hatred you also become free from fear and this new freedom allows you to start doing things you would have never thought of, like engaging in a dialogue with your former worst enemy.”

Yet David Chandler, a prominent historian of Cambodia and professor emeritus at Monash University in Melbourne, said Mr. Rainsy’s optimism conflicted with past experience with Mr. Hun Sen, who he said was likely using the opposition leader as a pressure valve to deal with growing discontent revealed in the 2013 election.

“Axiomatically, Hun Sen the chess player does nothing that might remotely lessen or threaten his control of the game,” Mr. Chandler said. “He might think that having a tame, expectant Rainsy alongside in a Hun Sen-controlled coalition will solve the CNRP ‘problem.’

“The problem, of course, is to a large extent out of the box of electoral politics, parties, etc., and consists of inchoate, widespread impatience and dissatisfaction spurred by social media and the way Cambodia is governed,” he said.

As long as that situation remains, Mr. Hun Sen will continue to stroke Mr. Rainsy’s ego and sell the view that the CNRP leader is changing the country’s political culture, said Sophal Ear, author of the 2012 book “Aid Dependence in Cambodia.”

“This is nothing new. You catch more flies with honey than vinegar. However, it’s just politics. Tomorrow things will be different,” said Mr. Ear, an associate professor of world affairs at Occidental College in Los Angeles.

Mr. Rainsy said in a separate interview Sunday that he was not concerned about the parallels between the present situation and past failed attempts to work toward a new political culture for Cambodia with Mr. Hun Sen.

“The first or second attempt or third attempt are not always successful. It needs time and adjustments to come to a more lasting and peaceful relationship,” Mr. Rainsy said, defending the prospect of lasting change.

“Sometimes history can be changed through a personal touch. When you start to build confidence, that is the human touch. A deep political analysis understands this. It’s a personal, or I would say, spiritual conciliation.”

Either way, according to Mr. Chandler, Mr. Rainsy’s united opposition party represents the biggest threat to Mr. Hun Sen’s power since Funcinpec in the 1990s, which Mr. Hun Sen deftly courted and then disposed of with a patient and ruthless efficiency.

“I doubt if Rainsy will be able to leave the spider’s web as easily as he entered it,” Mr. Chandler said. “Every day or week without violence is welcome, but I am not optimistic that this ‘peace’ will prevail in the medium term.”