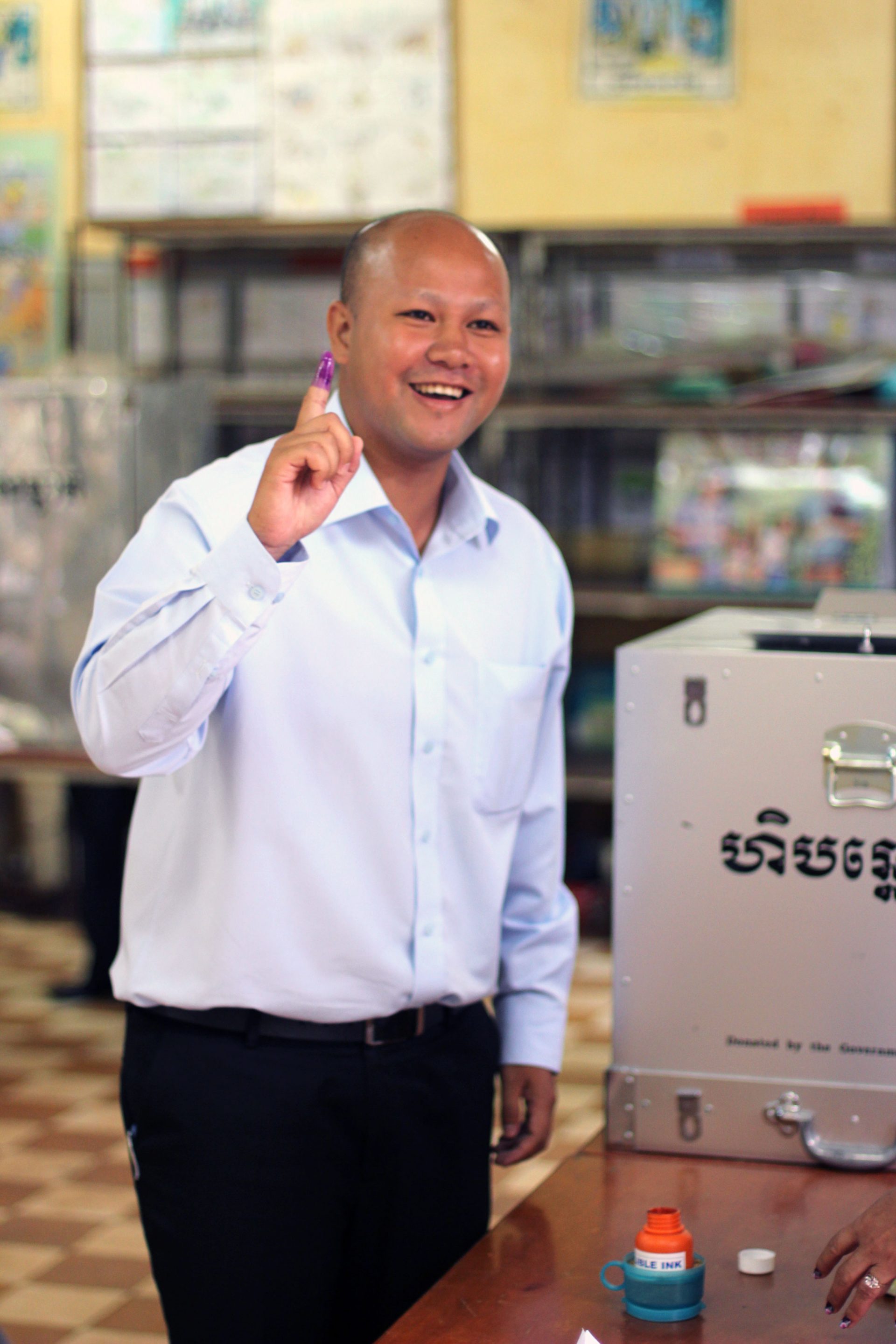 In Kompong Speu, Ex-Premier Faces Off With Hun Many

CHBAR MON CITY, Kompong Speu Province – Hun Many, the youngest son of Prime Minister Hun Sen, was not yet born when in 1981 then-Prime Minister Pen Sovann was purged by his Vietnamese allies and exiled to Hanoi.

Over the next decade, Mr. So­vann would languish under house arrest in the Vietnamese capital—blaming the hand of Mr. Hun Sen in his banishment from politics and Cambodia.

On Sunday, however, as the people of Kompong Speu province took to the polls, the lives of the two men—representing vastly different periods of the country’s history—dovetailed, as Mr. Many and Mr. Sovann faced off as the top-listed candidates for their respective parties in the province.

Arriving at a teacher’s school in Kompong Speu’s Chbar Mon City at 6:45 a.m. Sunday, Mr. Many was handed a ticket with his position in the voter line, which noted in a large black character that he was No. 7.

Keeping his vote a low-key occasion, Mr. Many waited in line, seemingly unnoticed by those around him, before stepping forward to casually place his vote in the ballot box.

After voting, Mr. Many de­clined to speak about his near-certain election victory.

“I don’t work with The Cam­bodia Daily,” he said, before being coaxed to comment on the coincidence of having drawn the ballot-number of the opposition Cambodia National Rescue Party (CNRP) for his position in the queue.

“I got lucky today,” he said. “Number 7 is the number of January 7,” he said, referring to the day that his father’s party celebrates its victory over the Khmer Rouge regime.

As Mr. Many began the drive back to Phnom Penh on Sunday—half an hour after he had arrived to cast his ballot—most voters at Chbar Mon City expressed strong support for both him and the CPP.

“I am very happy to see him come out and fulfill his duty as a normal Cambodian citizen,” said Sathyavuth Sereiwathana, 31, who voted shortly after Mr. Many.

Minister of Planning and Sta­tistics Chhay Thorn—a CPP lawmaker candidate in Kompong Speu—said after he placed his vote into the ballot box that the prime minister’s son would help inject young blood into the government.

“He is brave and he has ability and good health, so he is suitable and will win [his seat],” Mr. Thorn said. “I hope that the CPP will win a lot,” he added, identifying 80 to 90 percent of votes in the province as his goal.

At a pagoda about 10 km away, it was a case of third time lucky for Mr. Sovann, the former prime minister and the CNRP’s top-listed candidate in Kompong Speu, who has previously run for the National Assembly for both his own defunct Cambodian National Salvation Party and the Human Rights Party.

Mr. Sovann claimed earlier this month that as the CNRP’s top-listed candidate in Kompong Speu province, he was certain he would finally be elected to Parliament, and he repeated the comment Sunday.

“But I am concerned about yuon coming into Cambodia,” he added, using a derogatory term for the Vietnamese. “There are many tracks from Vietnam across to Takeo province near my house—they are coming here to vote.”

“I hope I will sit in the National Assembly with Hun Sen soon,” he added.

Outside the pagoda, Horn Phea, 43, said she voted for the opposition in the commune elections last year, but had switched her allegiance after the SRP failed to deliver what it promised.

“I wanted the SRP to demand government officials to build roads and develop something here, but they could not complete what they promised,” she said.

“So for this mandate, I’ve changed my vote to the CPP. The CNRP’s promises are as strong as wind.”