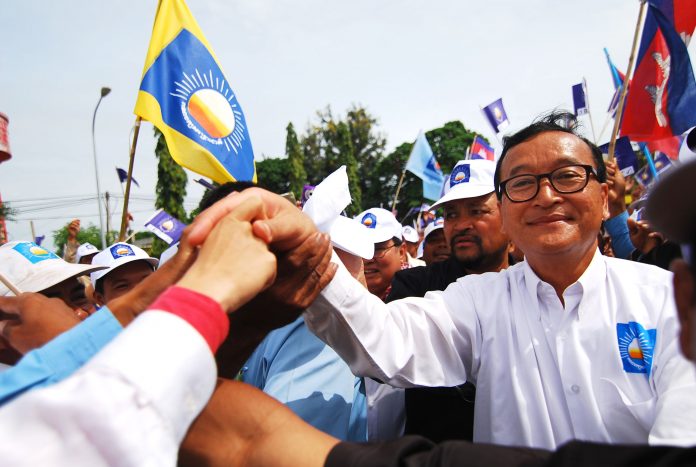 In his stump speech in what is traditionally considered a CPP heartland, Mr. Rainsy addressed his 2009 criminal conviction, which saw him sentenced in absentia to 11 years in prison for uprooting six border markers, and which, despite having re­ceived a Royal Pardon, is still preventing him from running as a candidate in Sunday’s election.

“Look, dear people, two farmers—Meas Srey and Prom Chea —they did nothing wrong. They were just protecting their land, but the court put them in jail.”

Mr. Rainsy then drew a comparison with another case he considers a travesty of justice—but for different reasons: that of Chhouk Bundith. The former Bavet City governor was recently sentenced in absentia to 18 months in prison for shooting and injuring three protesting garment workers last year, but police say they are unable to locate him to bring him to prison.

“But how about Chhouk Bundith, or whoever he is, who shot the workers, yet he’s free. It is such an injustice,” the CNRP leader said.

Mr. Rainsy also delivered withering remarks on one of his favorite topics and the very one that saw his conviction in Svay Rieng in the first place: the alleged encroachment on Cambodian territory by Vietnam.

“There are only three days left [until the election]…. I’ll collect all of Cambodia’s property and give it back to Cambodia. It’s been said that the yuon are coming a lot and removing border posts in our territory,” he said, using a term considered derogatory to the Vietnamese.

In a populist move, he then introduced one of the two farmers, Ms. Srey, to the crowd. Clasping his hand, she insisted that the court that imprisoned her was corrupt and that she had simply been protecting her land when the border post was removed.

The CNRP is making a stab at wrestling Svay Rieng province’s five seats away from the CPP, which held them all in the last election, and despite the best efforts of several thousand CPP supporters to drown out the opposition as their convoys rolled past, spirits Thursday were anything but dampened.

In nearby Prey Veng province, the CPP held seven of the 11 seats in the 2008 election, but Mr. Rainsy’s popularity was apparent there too, with several thousand people eagerly awaiting his arrival.

“We are fed up,” said 49-year-old Kheng Kea, a landless and jobless CNRP supporter who vehemently believes that Mr. Rainsy can deliver what the CPP has not.

“He can bring us prosperity,” she said. “We have seen all the land lost and destroyed.”

Ms. Kea, like many other supporters, had heard nothing about a charitable foundation set up this week by CPP Deputy Prime Minister Sar Kheng, which promises to give out hundreds of thousands of dollars to the province’s elderly, infirm and new mothers. Election monitoring groups have called the last-minute cash-giving charity akin to vote buying.

But Ms. Kea was unmoved. “I don’t think it’s going to work,” she said of the charity’s chances of se­curing a CPP win in the province.

Sitting on a pink Honda Scoopy among several thousand people waiting for Mr. Rainsy’s arrival, 22-year-old garment worker Hum Sokheang—who will be voting for the first time ever in a national election—said the CNRP was the obvious choice.

“I want change from the current leaders,” she said. “Other countries have developed, but Cambodia is different—and that’s the CPP’s fault.”

Chhim Bun Thon, a 58-year-old farmer who stood out in his plain clothes among a sea of white CNRP shirts and hats, said he was still undecided.

Mr. Rainsy delivered another crowd-pleasing speech in a park in the center of the town, after which he was joined by his deputy, Kem Sokha, to a rapturous applause.

Mr. Rainsy will spend his last day on the campaign trail in Kompong Cham province before returning to Phnom Penh.