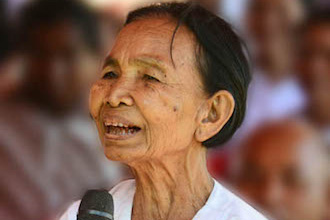 The path has been cleared for the Khmer Rouge tribunal’s co-investigating judges to either issue an indictment or throw out the case against Im Chaem, a district secretary for the regime, after prosecutors filed their final submissions.

However, the Cambodian and international prosecutors drew opposing conclusions in their submissions, calling for the former Khmer Rouge district chief’s case to be dismissed and sent to trial, respectively.

The investigation in the case concluded late last year and was sent on to the co-prosecutors, who filed their recommendations on October 27, the tribunal announced on Tuesday.

A statement released on Tuesday explained that while international co-prosecutor Nicholas Koumjian admitted that Im Chaem was not a senior leader, he considered her among those “most responsible” for crimes within the tribunal’s remit.

“In his view, through her leadership positions at the district and sector levels in both the Southwest and Northwest Zones—which gave her control over numerous armed forces and the lives of tens of thousands of civilians, Im Chaem played a key role in the commission of crimes which led to many thousands of deaths,” the statement said.

The Cambodian co-prosecutor, Chea Leang, on the other hand, submitted that there was no basis for an indictment against Im Chaem as she was not a high-ranking member of the regime. Ms. Leang appeared to toe the ruling CPP’s line and said the trials should end with the current case against Khmer Rouge leaders Nuon Chea and Khieu Samphan.

She argued that “only the existing accused persons” at the tribunal were senior leaders and thus were most responsible for crimes committed in the 1970s, according to the statement.

“Therefore, priority should be given to the trial of these accused persons to complete the court’s mandate.”

Hayat Abu-Saleh, public information officer for the court, said a decision from the investigating judges on whether to go to trial was expected in the first quarter of next year.

In March last year, Im Chaem was charged in absentia with crimes against humanity—including murder, enslavement, imprisonment and other inhumane acts—allegedly committed at sites across the Northwest Zone.

Following being charged, Im Chaem told reporters from her home in the former Khmer Rouge stronghold of Anlong Veng that she had done “nothing wrong” and called for those filing charges against her to be thrown in prison.

The government has been vocally opposed to cases 003 and 004, with Prime Minister Hun Sen claiming that further cases could plunge the country back into civil war. The court has been the target of continuing criticism over alleged political interference, with the U.N. being accused of complicity for shirking the issue.

Sat Sameth, a nephew of Im Chaem, said his aunt was no longer using a telephone and did not want to be contacted by the media. Her lawyers either declined to comment or did not respond to requests for comment.