Bulldozers on Monday demolished about a dozen thatch and brick huts on a parcel of disputed land to make way for a new road in Phnom Penh’s Chroy Changva district, as a family claiming to own the land burned tires in protest and stood by with documents they said would prove their tenure.

Bus Chamroeun, 50, who described himself as a soldier stationed along the border with Thailand, said he had owned the land in question since the mid-1990s, but had not stayed up to date with the government’s development plans while away on duty. 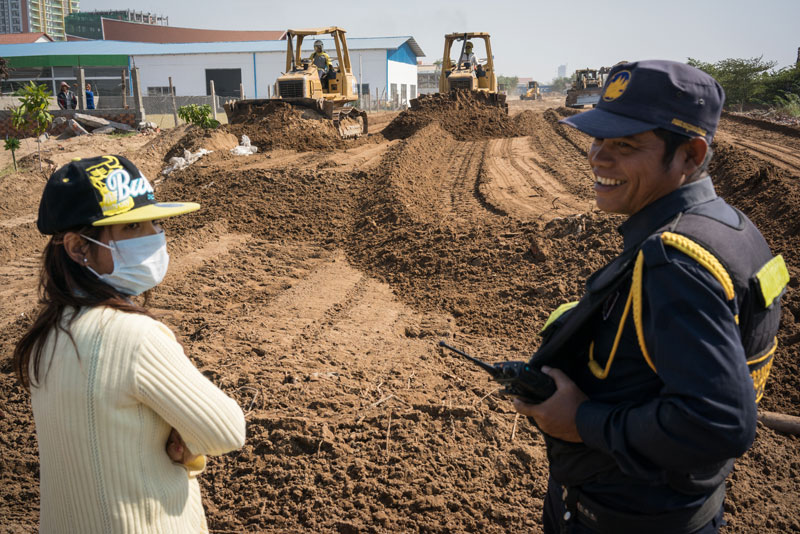 The Land Law states that anyone who has lived peacefully on a piece of land for more than five years prior to 2001 has the right to a hard title. Mr. Chamroeun said his documents proved that he had occupied the land for the requisite amount of time, but that he had not been able to obtain a title.

“I tried many times but the government never agreed,” he said.

Most recently, he said, the government had offered him $15 per square meter for the roughly 2,700 square meters that had been sliced from the edge of his 9,000 square meters. He said he rejected the offer.

“Land here is worth $2,000 per meter,” he said. “They said it is development land so I can’t sell or transfer it to anyone except them.”

The land in question—valued by real estate agents at hundreds of dollars per square meter—is sandwiched between National Road 6A and a $3 billion development project of the Overseas Cambodia Investment Corporation (OCIC), which has already overseen the eviction of hundreds of families—some with compensation, some without.

Municipal authorities have said the new road will alleviate congestion on National Road 6A, while residents have argued that traffic is not a problem on the highway, and that the state was doing OCIC’s bidding.

District governor Khlaing Huot on Monday denied Mr. Chamroeun’s claim that he had been offered $15 per square meter for his land, saying that the soldier had, in fact, been offered nothing at all, because the land had long been slated for development. He said cash compensation was only offered to those required to move to make way for the OCIC project.

“We cleared the land to develop the road. What is the problem? We are developing, and we can’t stop it,” he said, stressing that the road was a public project, and not for OCIC’s benefit.

“Even though their land is worth a lot of money, they should be thinking about developing the country,” he said. “Where is their land title? My stance is to develop.”