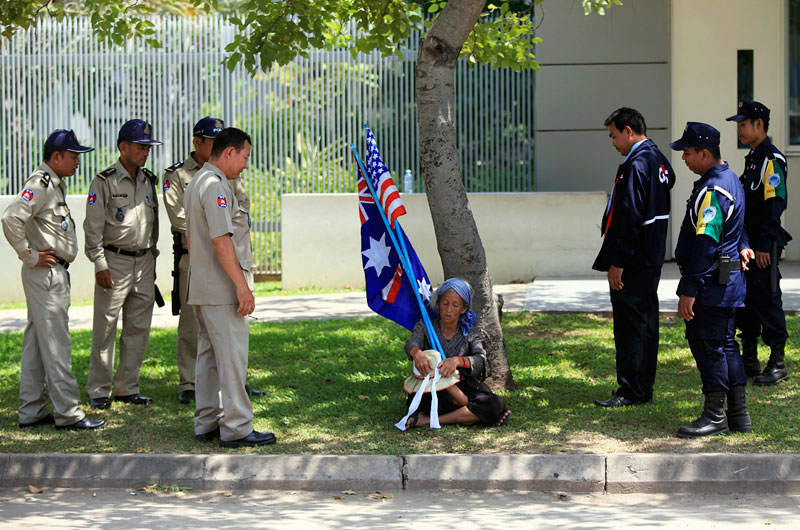 Hundreds of monks and activists marched through Phnom Penh on Friday calling for the cancellation of an agreement signed last month that could see refugees who sought asylum in Australia resettled in Cambodia.

As part of the deal, the Australian government will hand over $35 million in aid money in exchange for Cambodia agreeing to resettle an undecided number of refugees currently being held in Australia’s offshore detention center on the South Pacific island of Nauru.

Opposition politicians and human rights advocates in both countries have slammed the deal and blasted Australia for failing to meet its international obligations to refugees. Outside the Australian Embassy in Phnom Penh on Friday, the condemnation continued.

“Australia used to be famous for democracy and human rights,” said Oeur Narith, an opposition CNRP activist, over a loudspeaker attached to a tuk-tuk and facing the embassy. “But not anymore. The world can see what you are doing.”

“You are making deals with a country that is famous for corruption and human rights violations,” Mr. Narith shouted toward the embassy. “Why would you do this?”

Australia has said that asylum seekers on Nauru—who have held their own demonstrations against being sent to Cambodia, with reports of suicide attempts and children sewing their lips shut—would only come to Cambodia on a voluntarily basis.

In an interview Thursday, Interior Minister Sar Kheng said he was doubtful that many of the refugees would agree to come to Cambodia.

“I think that it is right for us to be worried [about the refugee deal], ” he said. “But if we worry too much, it will create a problem. I do not have hope that those people will come to Cambodia because it is only on a volunteer basis.

“If they do not come voluntarily, Australia will not force them and we also have no right to force them. We don’t do risky things without thinking,” Mr. Kheng said.

But Denise Coghlan, who heads the Jesuit Refugee Service in Phnom Penh, said that, while reports of self-harming asylum seekers were disturbing, they did not give a complete picture of the situation on Nauru.

“We only hear the stories of those who do not want to come to Cambodia,” she said. “With the limited freedom they have on Nauru and the prospect of staying there forever, some may want to come.”

The crowd of about 200 activists made their way through the city Friday morning, stopping to deliver petitions asking for the U.N., the National Assembly, the Council of Ministers, the European Union office and the U.S. Embassy to put pressure on Cambodia and Australia to cancel the deal.

The protesters carried placards with slogans such as “Cambodians are not Aborigines” and “Asylum Seekers are Not Convicts.”

Outside the Australian Embassy, three Australian citizens sat in the shade cursing the deal—they had joined the march despite working for NGOs here that require them to sign agreements not to participate in political activities.

“We will not be silenced when it comes to human rights issues,” said one of the NGO workers who asked not to be named. “I haven’t been this fired up since we marched against Joh Bjelke-Peterson in Brisbane in the ’80s,” she said, referring to the longest-serving premier of the state of Queensland, who was nicknamed the “Hillbilly Dictator” and fell from grace after being convicted of perjury and found to have manipulated elections.

“I am more ashamed of my current government,” the Australian said. “They did this deal with no transparency, and they are giving $40 million to a government that they know is corrupt. And besides, what’s this about ‘stop the boats?’ We are Australian, we are all boat people.”